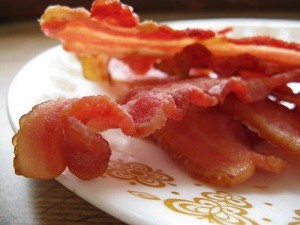 There’s evidently a fine line between a “hate crime” and a BLT.

The Reuters headline screamed: “Bacon found at NY Muslim celebration probed as possible hate crime.” I was expecting the subtitle: “Cops bring lettuce & tomato, dispose of evidence,” but to no avail. (Pork, of course, is verboten in Islamic culture. Don’t knock it, I say.)

Condemnation was swift and judgment final: “It’s anti-Islamic sentiment – a sign they don’t want us to feel welcome,” charged Cyrus McGoldrick, spokesman for the New York chapter of the Council on American-Islamic Relations, or CAIR.

Indeed, at the very least such a stupid, “Islamophobic” prank was, um, tasteless.

Except that it wasn’t.

A caller to a local newspaper took credit for the crime: “This is-I was reading the article about the horrible incident of bacon and Muslims in the park and I wanted to let you know that is not my intention. I had put the bacon there. It was going bad in my trunk and I put it out for the scavengers like the opossums and the raccoons and sea gulls, and I did not intend for that to cause anybody any problems.”

So, apparently, knee-jerk liberals and mainstream media have egg on their face once again. (Add toast and you get a Denny’s Grand Slam.)

Let’s put aside for a moment that we live in a hyper-sensitive, politically correct culture wherein hurting someone’s feelings is, quite literally, a federal offense. I’m more interested in the blaring double standard.

Bacon at a Muslim picnic? “Hate crime.” A crucifix with the image of Christ submerged in urine? “Art.”

I know, there was that time a group of tea-partiers stormed the mosque in Lansing, Mich, threw Oscar Mayer ham slices on the children, mocked the women for their hijabs and screamed: “Mohammed slept with a nightlight!” but …

No, actually, it was a group of homosexual activists who stormed a Christian church in Lansing, Mich, threw condoms at people, committed gross displays of public perversion in front of children and screamed, “Jesus was gay!”

“Hate crime, right?” Not a chance. Not even a ticket. In fact, law enforcement knew about the “protest” in advance and refused to send police. They sent a reporter instead.

You get the point.

Indeed, secular-“progressive” hostility toward Christianity is at an all-time high. But it’s not just “gay” activists and other “progressive” extremists. It’s systemic. It’s Democrat-tested and Obama-approved.

The Family Research Council, or FRC – no stranger to violent “hate crimes” that somehow aren’t “hate crimes” – has released a study cataloging a vast sampling of the left’s anti-Christian attacks. (The study can be found at ReligiousHostility.org. I highly recommend you review it before stepping into the voting booth this November.)

Yet the same “progressives” who find “homophobia” under every bed, and “Islamophobia” around each corner, have never imagined the cancerous “Christaphobia” that courses throughout their very own veins. Their narrow little minds won’t allow it. The poor sap with hateful halitosis is usually the last to know.

Still, what’s most remarkable is that secular-“progressives” and Islamists – such as the aforementioned CAIR and President Obama’s “Muslim Brotherhood” pals – have forged a bizarre and notably incongruous sociopolitical partnership.

Consider, for instance, that central to Muslim teaching is the mandate that homosexuals, when discovered, are to be summarily executed. Yet, homosexual activists and other liberals are usually the first to cry “Islamophobia” if anyone points out the bloody precepts central to mainstream Islamic dogma.

And how about women? Well, according to Islamic law – again, mainstream, not fringe – women are treated as chattel and can be beaten with impunity for any reason or no reason at all.

Yet liberal feminists – “tolerant” to a fault when it serves their agenda – will trip over themselves to ignore such “cultural diversity.”

The only explanation, as far as I can tell, is best illustrated by the maxim: “The enemy of my enemy is my friend.”

But, who is this common enemy?

Well, it too is signified by an alliance. This alliance, however, is most simpatico. It consists of Christians and Jews worldwide. It too is built around a shared cause.

But unlike that of the Islamo-“progressive” axis, this cause intends freedom, not tyranny – representative democracy, not control. Most importantly, this Judeo-Christian cause is built upon the rock of truth given us by the God of Abraham, Isaac and Jacob. The God of the living, not the dead. The great “I Am.”

I’m currently reading the two-part work, “Democracy in America,” written by Alexis De Tocqueville in 1835. The French statesman and historian immersed himself in American society and was left stunned by the indissoluble synthesis of Christianity and American culture.

He observed at the time that in America, “Christianity is the companion of liberty in all its conflicts – the cradle of its infancy, and the divine source of its claims.”

“There is no country in the world where the Christian religion retains a greater influence over the souls of men than in America, and there can be no greater proof of its utility and of its conformity to human nature than that its influence is powerfully felt over the most enlightened and free nation of the earth.”

“The Americans combine the notions of Christianity and of liberty so intimately in their minds,” wrote De Tocqueville, “that it is impossible to make them conceive the one without the other.”

Impossible so it must have seemed. Regrettably, however, De Tocqueville could never have foreseen today’s Islamo-“progressive” machine. It relentlessly endeavors to stifle Christianity’s profound influence on America.

Indeed, that influence will surly continue to fade lest Christians – both individually and corporately – again shine bright as the morning sun.

The historical record is indisputable. For almost two-and-a-half centuries, biblical Christianity has been America’s moral compass. It was Christians who, as wrote De Tocqueville, made America “the most enlightened and free nation of the earth.”

We’ve lost that moral compass and, today, wander aimlessly in the wilderness as a result. It’s up to Christian America to again find the way.

For if we don’t lead, who then will the world follow?