Trending Now
You are at:Home»Featured»Defending the Right to Self-Defense
By Ken Connor on February 14, 2013 Featured, Law & Justice 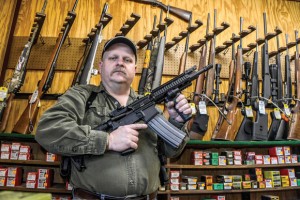 The recent spate of mass shootings has prompted President Obama and his allies in Congress to pursue new gun control laws with special urgency.  Mr. Obama is correct in sensing that the American people are ready for serious action on this issue, but he is mistaken in thinking that they are in agreement with him regarding the best way to address gun violence in America.  His choice to focus exclusively on guns to the virtual exclusion of mental health issues or the role of violence in the media has backfired drastically.  Gun sales are at record levels, and supply can hardly keep up with demand.  The President might pay lip service to gun rights, but it is obvious that his commitment to the 2nd Amendment is lukewarm at best.  The American people sense this, and are responding accordingly.

Perplexing as it may be to the urbane sophisticates of America – the Ivy Leaguers and Upper West Siders and Beltway pundits – average Americans cherish their right to keep and bear arms.  Gun ownership goes hand-in-hand with the spirit of rugged individualism that has characterized America since our founding, and in the face of a growing campaign to undermine that spirit, many citizens have begun stockpiling guns and ammunition.  And they aren’t just buying hunting rifles.  Given the nature of their purchases, it is evident that many Americans are determined to arm themselves and their families against a variety of threats.  They want the ability to defend themselves from predators like Adam Lanza and James Holmes, from home invasions and carjackings and muggings, and – should the day arrive – from a tyrannical government intent on exerting control over every aspect of American life.

Wisconsin Sheriff David A. Clarke, Jr., recently drew national attention for a radio address urging citizens to take an active role in protecting themselves and their families from evildoers in our society.  Like many law enforcement officials across the country he recognizes that for various reasons – both legitimate and otherwise – government alone is not sufficient to protect the American people from harm.  It is critical that law abiding, vigilant citizens take steps to protect themselves.  “With officers laid off and furloughed,” Sheriff Clarke said, “simply calling 911 and waiting is no longer your best option. . . .  You could beg for mercy from a violent criminal, hide under the bed, or you can fight back.”

People are taking this admonition to heart.  As more and more deranged individuals target public places for their violent rampages, more and more individuals are taking measures necessary to protect themselves.  The demand for concealed weapons permits is burgeoning.  Many seniors, including women, are getting certified.  As people witness America’s social fabric unraveling before their eyes, they see their government’s impotent and misguided response and they are determined to competently execute their right to self-defense.

There’s no denying that the problem of gun violence is complex.  An increased coarsening of the culture, the depreciation of the value of human life as demonstrated in violent video games and movies, a general loss of respect for the rights of others, the politically-driven mainstreaming of the mentally ill into society (rather than institutionalizing them for the safety of themselves and others), and a failure to stem the flow of illegal weapons into the hands of criminals and the insane – all of these components play a role.  There’s no way that our government can protect us from all of these threats, and in some cases, it won’t protect us from these threats because doing so would jeopardize its cozy relationships with various special interests.

Criminals aren’t stupid.  They are shrewd and they know how to take advantage of a population that has become complacent and vulnerable.  The surest defense against an armed criminal is to be armed yourself.  In the end, we the people are responsible for our own safety and that of our families, neighbors, and loved ones – and we have a constitutionally-protected right to the tools necessary to secure that safety.