Trending Now
You are at:Home»Featured»Degrees of Prayer and Intimacy with God
By Thomas Colyandro, MA, MDiv on June 6, 2011 Featured, Live in Christ 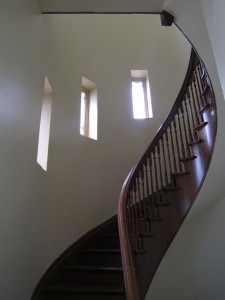 Inevitably forced to descend from the sacramental rampart that stands between the kingdom of God and the kingdom of man, the true believer finds himself beset with the indifference, isolation and ignorance born of the neo-pagan rejection of God and His Church.  In understanding and anticipating what the true believer would need to survive in such a world, God gave us the communal prayer of the Church (liturgy and sacraments) as well as the gift of personal prayer through which we can ascend to ever greater heights of intimacy with the Father, Son and Holy Spirit.

Bewildered as he can be by the generosity of these divine gifts, man finds himself in need of the kind of instruction and encouragement that aids him in accessing the abilities, tools and opportunities in prayer for greater union with God.  The good news is that if man allows himself to learn and to grow, he will be strengthened by what he knows and transformed by what he begins to see.

“Man becomes conscious of God’s gifts and of the greatness of the Giver, and becomes a being of praise like the angels.  Summarizing the contemplative tradition, Gregory Palamas stated that, ‘Enlightened, man reaches the eternal heights…And even without being in heaven, he cooperates with the heavenly powers in their unceasing song; while on earth, he, like an angel, leads every creature to God’” (Tomáš Špidlík, SJ, The Spirituality of the Christian East: A Systematic Handbook, p. 342).

“In simple terms, the first degree of prayer, vocal prayer, can be described as ‘standing before God in fear’; the second, meditation, as ‘moving toward God in longing’; the third, contemplation, as ‘resting in the arms of God in love’.  We may also simplify further by distinguishing these three degrees from each other by the words of the Lord Jesus: ‘Ask, and it will be given you’, which is vocal prayer; ‘Seek, and you will find’, which is meditation; ‘Knock, and it will be opened to you’, which is contemplation, or the degree of attainment” (Matthew the Poor, Orthodox Prayer Life: The Interior Way, p. 42).

To be specific, vocal prayer is the recitation of known prayers, including: quotes from Scripture, readings of the early Church fathers, sayings from the saints down through the centuries, and even our own improvisational expressions of repentance, petitions and thanksgiving.  Vocal prayer is our introduction to prayer and also is introductory prayer itself.  It is the foundation of a life of prayer that starts when we are children.  Even though vocal prayer tends to be simple and straight-forward, it does require some level of intellectual, emotional and spiritual effort.  In other words, these vocal prayers should not be taken lightly as they only become effective when they mean something more to us than the mere recitation of words.

Meditation is inward prayer that arises from the depth and nexus of the mind and heart.  It begins with some level of vocal prayer, but ends in silence.  This kind of prayer usually starts with a focused inner reflection of some aspect of spiritual reading, whether from scripture or the saints, continues with sorrow for the condition of one’s soul, and moves into an expression of thankfulness to God.  The finality of meditation comes when the body and soul open up in silence so that a deeply moving and realistic dialogue can begin with God.

Contemplation is the final degree of prayer, which involves a concentration that goes beyond the body and soul, and enters into the realm of what the Church fathers deemed as the spirit within us (i.e. that distinctive part of the human makeup we call ‘spiritual’).  Contemplation may begin through a focused meditation, but this is only the entry point that should ultimately lead to the opening of the self to God, who reaches down toward us and in us.  In other words, if the human person is physical, relational, intellectual, emotional and spiritual, then contemplation is not only the prolonged silent elevation of the spiritual aspect of our humanity (over and above the other four aspects of our humanity), but also the beginning of our face-to-face meeting with God.

Infused contemplation, on the other hand, is purely a gift from God that “pushes prayer out of the confines of human will and abilities” (Matthew the Poor, Orthodox Prayer Life: The Interior Way, p. 42).  It cannot be achieved on one’s own, except that it often comes to those who are always in compliance with the will of the Holy Spirit, meaning that the person stops concerning himself with matters of the world.  The combined gifts of wisdom and discernment seem to be prevalent in people with this gift.  In a sense, infused contemplation is the ability to behold divine truths that go far beyond human understanding.  The person who receives infused contemplation is clearly never worthy of it as it is purely the act of God pouring His heart into the one whom He chooses to have such a gift.

With so many competing and misleading voices on prayer these days, understanding the degrees of prayer – as described in Scripture and explained through Tradition – will enable the true believer to navigate the spiritually bereft kingdom of man.  Not only will he understand what true prayer is, but also be better able to distinguish where his own prayer life stands and to know how to elevate his spiritual life toward the kingdom of heaven.