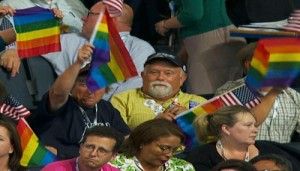 But whoever disowns me before others, I will disown before my Father in heaven. (Matthew 10:33)

Are you a believer? I’m not asking if you’re a Democrat, a Republican or an independent. I’m asking if you believe in God. The God of Abraham, Isaac and Jacob. The God of the living, not the dead. The great “I Am.”

If so, here’s something to seriously consider in the voting booth on Nov. 6. In its official 2012 version, the Democratic Party finally scrubbed all recognition of God from its party platform. This was intentional. It was by design. No one should have been surprised. It was a long time coming.

In just the last decade or so, extremist elements within the Democratic establishment have lodged a successful secular-socialist coup. The alarming consequences of this “progressive” triumph have become manifest throughout the pages of the DNC’s 2012 platform. They were also on display at the recent Democratic convention.

Slippery was the slope into Democrats’ anti-theist primordial bog. In 2004, there were seven mentions of God in the platform. In 2008, there was but one.

That is, until some in leadership realized that political fallout was reaching, well, biblical proportions. On Wednesday, in a highly contentious and unprecedented move, the DNC held a special session where, to a volley of stadium-shaking boos, Democratic leaders narrowly passed a resolution to put “God” back in the platform.

It was transparent as anything political can be. It was done out of fear, not love; necessity, not respect; incredulity, not fidelity. Nonetheless, Democrats, like everyone, should be grateful that God is more faithful to them than they were to Him.

Still, what’s equally revealing is what replaced God. The term “government” is referenced repeatedly – 55 times, in fact. Nearly each reference is premised on the dubious claim that big government can, and will, cure all of humanity’s ills. The DNC even played a promotional video proclaiming: “The government is the only thing we all belong to.”

True, the 2012 Republican Party platform also mentions government, but in the context of limiting its size and scope – of protecting individual liberty from the authoritarian monstrosity envisaged by Obama and the DNC. As Ronald Reagan observed: “Government is not the solution to our problem; government is the problem.”

The Republican platform also acknowledges God. Twelve times, in fact. And each acknowledgement falls within the framework of “our country’s Judeo-Christian heritage.” This heritage is something the Democratic Party both stubbornly denies and viscerally abhors.

Shortly after the DNC released its secularist platform, I tweeted: “Well, Democrats are officially ‘godless’ …” Zack Ford, a “progressive” blogger with ThinkProgress.org, captured, I think, the general consensus among Democratic movers-and-shakers. He tartly replied: “Good!”

Another of my Twitter followers, @redandright, answered: “In all fairness to the DNC, I think He [God] requested it.”

She may be on to something.

No anti-God platform would be complete without taking Wite-Out™ to all things pro-Israel. Jews, take note: Democrats’ 2012 platform also “yanked” all previous pro-Israel language, even refusing to acknowledge Jerusalem as her capital.

This, too, should come as little surprise. Throughout his presidency, Barack Obama has shown overt hostility toward Israel – something no other president in American history has done. Instead, Obama has unapologetically sided with the Palestinian Authority, the Muslim Brotherhood and other Islamo-fascist radicals, all of whom seek Israel’s total annihilation.

Even so, after widespread Judeo-Christian outrage, language referencing Israel was once again restored.

Another too-little-too-late act of desperation? Perhaps. As Friedrich Nietzsche, one of the God-deniers favorite comrades-in-nothingness, once said: “I’m not upset that you lied to me, I’m upset that from now on I can’t believe you.”

And then there’s Democrats’ sacred cow: abortion. Welcome to today’s Democratic Party, where the women are “sexually liberated” and their offspring gravely imperiled.

Indeed, it was genuinely sad to see such a parade of angry, hurting women take the DNC stage to command, with perverse pride, some phantom “constitutional right” to snuff-out their very own young (Bet she would’ve looked like you, mom).

Their party platform is no better. It “unequivocally” demands unfettered abortion on demand, at taxpayer expense, through the ninth month – “regardless of ability to pay.”

By contrast, the Republican platform aligns with the actual Constitution, stating: “[T]he unborn child has a fundamental individual right to life which cannot be infringed.”

To be sure, it would have been helpful if the DNC had included, in its Glossary of Terms: “Reproductive Freedom: noun 1) ‘Sexual liberation’ without consequence (i.e., hook-up, cover-up, pay-up and shut-up.)”

I know. I’ve declared “war on women.” But we conservatives believe that sexual relativism comes at a cost – one we refuse to subsidize. I prefer to call it a “war for responsibility.”

Speaking of the “war on women,” wasn’t it rich? The DNC featured, as its heavy hitter, Bill Clinton – former Preezy of the Sleazy, serial sexual-harasser and, likely, so very much more.

They also had an emotional tribute to late Sen. Teddy “splash-’N-dash” Kennedy. I wonder if Mary Jo’s folks got free admission. Hypocrisy, thy initials are D-N-C.

But at least the Democratic platform is “pro-education,” right?

Well, for the record, being “pro-education” means teaching little Billy to read, not which eyeliner matches his skirt. (Yes, this godless manifesto went there too.)

Democrats signed-off on every demand of radical “LGBT” pressure groups. They even put their official stamp of approval on “same-sex marriage,” a postmodern novelty rejected in 32 of 32 states wherein “we the people” have spoken.

No, this ain’t your father’s Democratic Party. In fact, as the DNC goes godless, I suspect quite a few God-fearing Democrats are contemplating a break with tradition.

Well, now maybe we’re on to something.