Trending Now
You are at:Home»Learn & Live the Faith»Catechesis»Did Neanderthals Have a Soul?
By Bob Kurland on December 10, 2015 Catechesis, Featured, Science 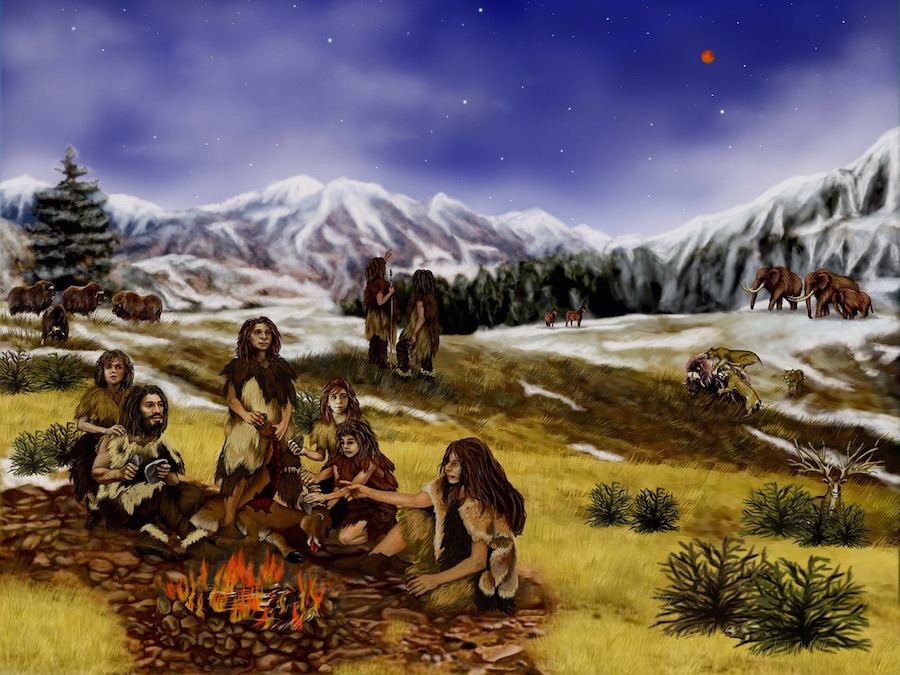 “The magisterium of the Church takes a direct interest in the question of evolution, because it touches on the conception of man, whom Revelation tells us is created in the image and likeness of God….

“Pius XII underlined the essential point: if the origin of the human body comes through living matter which existed previously, the spiritual soul is created directly by God…

“As a result, the theories of evolution which, because of the philosophies which inspire them, regard the spirit either as emerging from the forces of living matter, or as a simple epiphenomenon of that matter, are incompatible with the truth about man…

“The moment of passage into the spiritual realm is not something that can be observed in this way—although we can nevertheless discern, through experimental research, a series of very valuable signs of what is specifically human life.” Pope St. John Paul II, Message to the Pontifical Academy of Sciences: On Evolution.

Pope St. John Paul II laid down issues of evolution, ensoulment and monogenesis in his address,  quoted above. Yet I still have questions, which came to mind as I listened to the audiobook, Rise of Humans: Great Scientific Debates, by John Hawkes. The Neanderthal genome has been explored in detail, to show that there is a 99.7% similarity between human (homo sapiens) and Neanderthal DNA. Moreover, there is strong evidence that Neanderthals ceremonially buried their dead, perhaps an indicator that they believed in life after death.

Here, then, are several questions that occur to me. Some have been answered, at least partially, in Kenneth Kemp’s article, Science, Theology and Monogenesis. I ask the reader to assess critically these questions and some answers given below, because there seems to be a conflict between what paleoanthropology and genomic research tell us and what we are to believe from Catholic doctrine and dogma.

Monogenesis supposes that humans descend from one pair of ancestors, male and female, as opposed to polygenesis, that many humans were ancestors. That humans descended from only two is a cornerstone of Catholic dogma on original sin. As set forth by Pope Pius XII,

“For the Christian faithful cannot maintain the thesis which holds that either after Adam there existed on this earth true men who did not take their origin through natural generation from him as from the first parent of all, or that “Adam” signifies a number of first parents. Now it is in no way apparent how such an opinion can be reconciled with that which the sources of revealed truth and the documents of the magisterium of the Church propose with regard to original sin, [emphasis added] which proceeds from a sin actually committed by an individual Adam and which, through generation, is passed on to all and is in everyone as his own.” Pope Pius XII, Humani Generis

Even if “biological” monogenesis does not obtain, what might be termed “theological” monogenesis could occur, and so Pius XII’s objection could be encountered. This proposition has been explored in some detail by Kenneth Kemp, in his article Science, Theology and Monogenesis, which will be discussed at greater length below.

The essential base for this argument rests on a Thomistic view of body and soul, reflected in Pope St. John Paul II’s remark (quoted above) that “[even]if the origin of the human body comes through living matter which existed previously, the spiritual soul is created directly by God.”

Is it the case that biological monogenesis did occur?  Some evolutionary geneticists have justified the idea of descent from one ancestor (or a pair of ancestors) by the “Mitochondrial Eve” hypothesis, which proposes that all humans are descended from an African lady who lived some 100,000 to 200,000 years ago.

The Mitochondrial Eve hypothesis has been criticized by evolutionary geneticists who argue that “bottlenecks” (small population sizes) lead to minimal genetic variation and thus lower survival of species.

Kemp’s thesis, theological monogenesis, rests on the notion of philosophical and theological species:

“The biological species is the population of interbreeding individuals.
The philosophical species is the rational animal, i.e., a natural kind characterized by the capacity for conceptual thought, judgment, reasoning, and free choice. St. Thomas Aquinas argues that a certain kind of body is necessary for rational activity, but is not sufficient for it. Rational activity requires, in addition the presence of a rational soul, something that is more than the power of any bodily organ, and that therefore can only come into being, in each individual case, through a creative act of God. [emphasis added]   The theological species is, extensionally, the collection of individuals that  have an eternal destiny. The Catechism of the Catholic Church says ‘God created man in his image and established him in his friendship.’ [CCC 396] Kenneth Kemp, Science, Theology and Monogenesis

I won’t give Kemp’s arguments in detail, but only a summary–please go to the original paper for a complete story. He supposes that a small population, about 5000, existed with the necessary physical characteristics (“body”) for rational activity. God selected two of these, a man and woman to be endowed with a soul, the capacity for abstract thought: e.g. to know that one would die, to have knowledge of one-self as an individual (self-consciousness), etc.

When would Adam and Eve have appeared in human pre-history? That point is not clear.

Certainly tool-making is a necessary but not a sufficient condition for rational activity in the sense Kemp would take. Pebble tools go back to Homo Habilis some 2.6 million years ago, and in more advanced forms, possibly requiring rational forethought, to Homo Erectus, some 2 million years ago. Neanderthal man had a sophisticated tool-making capability, used fires, buried his dead with accompaniments.

As pointed out above, genomic analysis of Neanderthal DNA shows a 99.7% similarity to that of Homo Sapiens. Moreover,  rcent genome analysis of homo sapiens skulls show some interbreeding with Neanderthals, although that conclusion is controversial.

The questions raised at the beginning of this article have been answered only partially. It is unlikely, but not impossible, that biological monogenesis occurred. If we accept (as I do) that mind, self-consciousness and what we please to call “soul” are not solely a physical thing, but are immaterial, then we still are in the dark as to what constitutes paleo-archeological evidence for rational activity, activity that is sufficient to show that individuals in a species are endowed with souls. We are unsure when in pre-history God gave two individuals their souls, and continued to do so thereafter for each of their descendants.
To the question put in the title, I would answer “Yes!”, Neanderthals did have a soul. I would argue that any species that buries its dead has knowledge that life will end, and is therefore endowed rationally.
Finally, to all who would dispute that there is such a thing as a soul, and that mind/consciousness/etc. are purely physical phenomena–you’re welcome to your opinion, but I (and many others) don’t agree with you.

*”This argument is based on variation in the DRB1 gene in the human population.  This gene, one of one hundred or so that make up the human leukocyte antigen complex, is very old. The fact that thirty-two of the fifty-nine variants found in man are also found (in similar, though not identical form) in chimpanzees shows that these variants arose before the phylogenetic divergence of chimpanzee and man, some 6 mya [million years ago].  Since no individual can carry more than two such variants, the absolute minimum human population in every generation after the evolution of man  from a common human-chimpanzee ancestor is sixteen. (The other twenty-seven variants could have arisen from later mutations.)

This genetic diversity precludes very narrow population bottlenecks as
well as very long-lasting ones, as such bottlenecks are too small to transmit the observed range of variation to succeeding generations. …Ayala calculates that the minimum bottleneck sufficient to maintain that level of diversity (and then to return to the mean population size) is about 4,000 synchronously reproducing individuals, or perhaps slightly less. That suggests an actual population of some 15,000–20,000 individuals.”  Kenneth Kemp, Science, Theology and Monogenesis.

**Note that a similar story is given for an original “Adam”, traced through the Y-chromosome (passed from father to son), who lived 100,000 to 200,000 years ago. Whether Y-chromosome Adam and Mitochondrial Eve were alive at the same time and had children is an interesting question, to which we’ll not know the answer (while alive).