Trending Now
You are at:Home»The Catholic Family»Education»Disorientation: How to Go to College without Losing Your Mind
By Patti Maguire Armstrong on August 14, 2012 Education, Featured, On Books 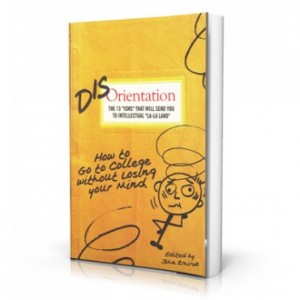 The world of academia during the Seventies opened our minds so wide that our brains seemed to fall out. False teachings often undermined faith and morals. Yet, we came away believing we were more highly evolved than when we went in.

I recall one professor warning a class of seniors: “You will be surprised that the world has not changed as much as you have during your time here.”

My years at college had subtly brainwashed me on theological issues. To be honest, the Seventies was a time big on feelings and short of theology in Catholic schools, so there wasn’t much to wash away. However, one issue I had been passionate about was abortion. Yet, a few years later, my biology class at Michigan State University convinced me that abortion was no big deal. The textbook was a brainwashing in which the idea of an unborn child having life as we know it was rejected.

I look back and wonder how I had so easily been led astray by relativism that some lives were of greater value than others. I also sadly recall my roommate letting a few of us in on her pregnancy and trip to the abortion center. It never occurred to me to appeal for the life of her baby. How did I not see anything wrong? Thus, today, when I hear the regrets and pain from post-abortive women, I understand the fog that has clouded the brains of so many.

Since then, more years have passed than I like to count. My guess is that outside of solid Catholic Colleges, things have only gotten worse. Time spent in higher learning often chips away at the Catholic truths that so many parents and teachers handed down to their children. My two teen daughters embrace their faith in a big way right now but I am not taking anything for granted. First and foremost, I put my children in God’s hands and pray hard. But I also want to plug some of the holes that that rob college souls of truth.

The book Disorientation: How to Go to College without Losing Your Mind edited by John Zmirak, presents a ”Syllabus of Errors” that can help plug such holes. It hits the nail on the head, again and again with fourteen essays on the traps laid for unsuspecting students. Describing these killers of truth will help kids to recognize them when they meet in class.

For instance, Elizabeth Scalia explains how sentimentalism cannot reconcile to the heart of feel-goodism, trusting feelings over authority and rigid principals. People begin to believe that the Catholic Church, filled with sinful men and women, is hypocritical and beneath the truly kind hearted. “When the sentimentalist’s reasonable outrage on behalf of very real victims inspires him to dissociate from the faith, he believes he has safely removed himself from the stains upon the Church,” Scalia writes. There is no room for humility as fertile ground for grace to take root with such a mindset.

Eric Metaxas explains that by the time he had attended Yale in the 1980?s, truth was an outdated notion, replaced by the relativistic theory that there is no single truth. Such thinking spreads quickly among peers. He points to two relativists in the Bible–Eve and Pontius Pilot. Eve asks herself, “Did God really mean…?” Metaxes points out that college students are encouraged to question authority–all authority–for after all, who are they to tell us something is right or wrong? “The relativist, like Pontius Pilate, is world-weary and cynical, and when he asks, ‘What is truth?’ he is not really seeking an answer.” Yet, Metaxes points out that Jesus called a spade a spade, or rather sin, a sin. Something the “love one another and don’t judge” relativism forgets.

John Zmirak takes apart Hedonism as the belief that the pursuit of pleasure and avoidance of suffering fuels the thinking that, “These are the best years of your life–make the best of them!” He states that for the hedonist, suffering is a miscalculation of the goal to enjoy life. Suffering as redemptive has no place, according to that philosophy. Zmirak points out that we should not seek out suffering but hedonism neglects to recognize that we can suffer for good such as women in labor, and soldiers defending their country. A hedonist fails to see that such a suffering can draw us closer to Christ.

Peter Kreeft tackles Progressivism which confuses “new” with “true.” And let’s face it, the Catholic Church is anything but “new” so progressives don’t see much good coming from such a stagnant (stable) institution. He points out: “Cleverness in inventing machinery has no tendency to cause wisdom or virtue in the inventor. If anything, it causes pride, hubris and addiction to the power the new machines give us. And that is regress rather than progress in wisdom and virtue and happiness.”

Multiculturalism is the politically correct excuse for degrading the values of a Judaeo-christian civilization. Robert Spencer points out that under Multiculturalism, thinking that one culture is superior to another is unacceptable. He claims the United States and Western Europe today is entrenched by it so completely that there is a failure to notice the evils often inflicted upon us by such things as terrorism. Spencer labels Multiculturalism as a heresy that dazzles the unwary with partial truths.

He states, “Since all human beings are creatures of the one God, to value the contributions of various ethnicities may seem to be an extension of the idea of the dignity of the human person. The Church is catholic, universal, and so to deny the virtue of ethnic diversity may appear to manifest a dangerous parochialism….” But, Spencer points out, “It is the Catholic Church, more than any other world religion, that most fully embraces the real diversity of the human race–bringing the Gospel to all nations, and seeking (even more effectively after Vatican II) to ‘inculturate’ her central tenants in the existing civilization of a people…”

And so it goes, one “ism” after another is exposed for it’s irrationalism. One “ism” missing from this book is atheism. I am guessing that the extreme thinking that totally removes God from the picture was weightier than a mere essay could hold. For the other shallow truth-benders, an essay is enough to expose the glaring illogic.

Zmirak sums up this book by saying the college years will be over in a flash. His message to students is: “Choose your classes carefully. I edit a guide to hundreds of American schools called Choosing the right College, so I can say this with some authority: Most college curricula are trashy, including those at Ivy League universities.” He recommends taking meaty courses such as classical literature and U.S. history before 1865. He also appeals to students to join reading groups and hone their debating skills but most importantly to deepen their understanding of their faith.

College seeks to change students in many ways but the truths of our Catholic faith do not change with the times. They have never been exactly “in-style” in a cultural sense but Jesus Christ is the way and the truth and the light in spite of any college professor who says otherwise.