Trending Now
You are at:Home»Featured»Divine Providence or Coincidence
By Christina King on June 7, 2011 Featured, Live in Christ 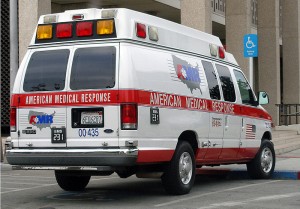 When I woke up today, I did not know I was going to hold a dying woman’s body in my arms. I did not know I would have to push through skin, muscle and fat tissue to tie a tourniquet around her leg, which was nearly severed from her body.

I was heading to our parish picnic, where I had signed myself and two of my teenage daughters up for face painting. As I turned down Northland Avenue, an ambulance pulled into the intersection. I turned the radio off and my daughters and I prayed a Hail Mary for the person who was in need and that the driver would get there safe and soon. Little did I know that I would soon see another ambulance, this time at the scene of an accident were I would be.

When I turned down the street to my church, I noticed how sparse the cars were and decided to drive towards the back of the church. As I passed the first driveway, my daughter, who was sitting in the back said, “Go back mom, there is a woman who was hit by a car. She is pinned by a pole!”

My other daughter scoffed at her sibling, saying, “I don’t think so, I am sure that is not what you saw.”

Wondering what it was that she did see, I turned the car around and pulled into the main driveway. Sure enough, there was a woman under a car near a light pole and several people were standing around her. All of them seemed to be in a daze.

At first I thought, “I don’t want to be in the way, maybe I should not go over.” But then I saw that, other than a woman holding the victim’s hand and another holding her head, it did not appear anyone knew what to do.

My mothering and bossy nature came to the forefront and I immediately yelled out, “Is there anyone here that has more training than me? I know CPR, I have had some first aid training.” As I looked around they all shook their heads and stared blankly, just as scared as I was. We all could see the blood forming a large pool around her. I knew I had to do something and I had to do it fast.

I yelled for someone to call an ambulance and then I yelled for them to get Fr. Tom outside now! I kneeled down next to her and she was praying the Hail Mary, over and over in a whisper. I yelled for the people around us to pray a rosary.

“She is praying a rosary alone, please, someone pray with her.” As I said this I heard the group begin to pray.

I now looked more closely at her injuries and saw that the bone had not only been broken and twisted completely around, but it had been pulled through the body. The tissues and bone were exposed and the blood was spurting out. Out of nowhere, an image that I remembered from college popped into my mind. It was a black and white photo from a first-aid manual of a tourniquet. I realized she needed a tourniquet but was not sure how I would get it around this mutilated leg or even where I would get something to tie around her. I yelled for someone to get me material or a belt, I needed a tourniquet.

Three people ripped off their belts and thrust them at me. I then realized I was going to have to pull through the muscle and fat tissues and lift them out of the way to find my way around the leg. After several failed attempts, I realized if I did not do this, she would bleed to death — if she was not already at the verge, with little to no blood. I yelled for someone to go and get Fr. Tom.

“She needs a priest! Someone get Father!” I yelled out. Finally I saw him emerge from the church doors looking confused and then in horror and shock at what he was looking at. One of his parishioners, a woman who sought him out after every Mass to kiss his hands and thank him for bringing her Jesus, was lying under a car, in a pool of blood. Not more than five minutes earlier, she had been smiling up at him.

“There’s no time Father! She needs an anointing (I did not want to scare her or any family present by saying last rites, although I clearly felt she was going to die before the ambulance even arrived). You have to give her an anointing now!”

I yelled for him to hurry and get help. Then I yelled his name again thinking that more than help, I needed him. She needed a priest. His face turned white as a sheet and then, as if he was given an instruction internally, he turned on his heel and went back into the church.

Someone I am not sure, said to me, “He is going to get the holy oil.”

The next thing I know he was back with the holy oil and was praying over her and giving her the blessing of the church and absolving her of her sins.

At this time, Paz had stopped praying and looked so very afraid. Her eyes where very wide and her mouth was open as she looked into my eyes. I quickly prayed for the strength to do what needed to be done and I felt an interior voice say, “Just focus on her. I lifted up the flesh and put my hands into her body and felt around to the other side and then quickly slid the belt along the route. I secured it and then pulled with all of my might, knowing it would need to be tight. I watched her face as I did this to see if there was any reaction of pain, but there was none, only confusion and fear.

I leaned over to the woman and told her not to be afraid. I reminded her she just received the Blessed Sacrament. I told her she had been given last rites and that we were praying the rosary with her. I saw her look at me and I told her that Mary will hold her in her arms and Jesus was with her. I told her she was in a state of grace, she was wearing her scapular and she was ready. I told her to trust in Jesus, to place herself in Mary’s arms over and over. I desired to give her peace and to take away any and all fear, but let her know to trust in God, trust in him. Her eyes softened and it was as if all the fear and confusion melted away.

I saw the blood flow slow down, but I saw the spurts continue with a pulsing rhythm. A woman, an anesthesiologist was helping. She told me I had to apply pressure at the groin. The tourniquet was not enough so I had to use my hands to grip her flesh directly to try and stop the bleeding. I reached in and held the skin and tissues with my hands as tight as I could. The spurts stopped.

When I realized all I could do was done and a paramedic stepped in and was working on her breathing, I let go of her leg and stepped back. Her blood covering my hands and arms, pooled in my shoe and on my knees from where I had been kneeling before her.

I slowly stepped away from her. It was hard, because I saw her go from praying and looking at me, to dying in front of me.

As I went into the parish bathroom and washed the blood off of my hands, I realized that I had the blood of a possible saint on me. She had come from Mass, she was a regular attendee and eucharistic adoration visitor, she was wearing a scapular, had gone to confession (I found out later she attended Divine Mercy Sunday services and this is the remittance of all temporal consequence for sin) and she had been given last rites and anointing. I may assume, based on her faith and love of God, that she was with Jesus in heaven as I washed her body from my hands. I prayed for her and thought, was this a loving mercy from God?

I have always prayed that when I die, I would be in a state of grace, I would have been to confession, would have just received Communion, would have a priest there to give me last rites, that those around me would be praying a rosary or speaking to me about trusting in God and not being afraid. Here she was given all of these things.

At 95 years of age, she lived a beautiful long life. I found out she also had all her faculties and was considered by many women a beautiful and holy soul that inspired them to live their own faith. She had a special devotion to the Sacred Heart of Jesus and shared this prayer with others. She had been an OB/GYN, had a love for the unborn and here she laid, not more than three or four feet from the parish’s memorial to the unborn. She was surrounded by flowers and people praying the rosary for her and with her.

I met a woman named Tony who told me these things about Paz and also how much she prayed and offered up suffering for her own son to come back to the sacraments. I offered my next Mass for this and later, offered my Communion at her funeral Mass for him to be reunited to the church and the sacraments. I ended up singing the Ave Maria at her funeral. How fitting since it was the prayer we had said together as she approached the throne of God.

I think not. I think it was a gift. I think it was divine providence. How can a tragedy be a gift? Because her death, although it still haunts me, was the way I would want to die. For those of you who believe in heaven, then you realize what an amazing blessing it was that the hour of her death was 15 minutes of union with Jesus in the Blessed Sacrament, followed by 15 minutes of suffering, surrounded by people in prayer and a priest anointing her and comforting her. The prior 30 minutes was the holy sacrifice of the Mass. For me, that would be a blessing. I pray her family sees it that way.

Eternal rest grant unto her O Lord and let perpetual light shine upon her. May she rest in peace. Most Sacred Heart of Jesus, have mercy on us.