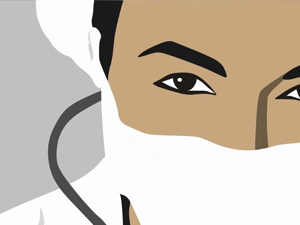 If we could count the ways that physicians have become the politicians of their chosen profession, perhaps we would better understand why human lives are like poker chips, popular votes or, even worse, trash.

Lest we forget, when the ballyhoo started in Texas and Senator Wendy Davis began her infamous filibuster, the question before the state senate was whether or not some preborn children who had reached the age of 20 weeks gestation should be allowed to continue living. What was most disturbing about this debate was not that politicians were arguing over abortion, but rather the total absence of physicians weighing in to defend the babies at risk in the debate.

Apparently most physicians view the act of abortion as an elective medical procedure. There was a time when such complacency over medical killing would have been shocking, but those days are long gone. Today, doctors cannot unanimously condemn a number of practices that result in death for the patients entrusted to their care.

For example, in vitro fertilization practitioners hone their skills over the bodies of genetically imperfect babies. The most recent breakthrough is an “embryo screening technique [that]combs through genetic data looking for risk for diseases and other abnormalities.” Those preborn babies who fail the screening process are doomed, as few doctors would define these victims of scientific manipulation as “babies.” Rather, they prefer to describe them as embryos that have “no chance of becoming a baby.”

Such a skewed definition dehumanizes the individual and becomes a death sentence for those deemed genetically inferior.

Or consider the doctor who selects a patient as an organ donor and suddenly discovers, hopefully before the organ is taken, that the donor himself is actually quite alive. Such a scenario actually played out in Syracuse, New York, in 2009 but was never reported to the media. According to the newspaper, “Burns, 41, of North Syracuse, recovered from her overdose of Xanax, Benadryl, and a muscle relaxant and was discharged from the hospital two weeks after the near-miss in the operating room.”

Because the nearly dead victim of the error was extremely depressed at the time, her family made no effort to take legal action against the hospital, so only now is the complete story coming to the public’s attention. Regarding the incident, her mother admitted, “The doctors never explained what went wrong.” While the media would have us think that such events are a rarity, can we really believe that such a thing could have happened at other times, in other hospitals, with the same silence after the event?

The honest answer is yes, and the reason why is simple. Healthy human beings who survive the womb are deemed more valuable that those who exist prior to birth. On the other hand, born people who present challenges to the rest of society because of genetic disorders or terminal illness are also devalued because many physicians, not to mention society as a whole, are insensitive to the helpless, are too selfish to care for the vulnerable, and are far too blinded by self-centered concerns to examine the differences between cultural euphemisms and actual truth.

It’s easier on the conscience of individual citizens to dismiss a fetus than it is to agree to killing a preborn child.

It’s more tolerable for the public to go along with selecting only the genetically perfect than it would be to accept a human being regardless of his condition or possible disease.

It’s more convenient for society to agree that physician-assisted suicide should be available to the dying than it is to embrace the sacrifice required to care for a loved one no matter what that might entail.

All such actions are facilitated by an elite group of physicians and clinicians who have forgotten that respect for the human person requires life saving rather than life taking.

The culture of death is alive and well in the practice of medicine and long gone is the Hippocratic tradition.

When will we remember? Primum non nocere—First, do no harm.