Trending Now
You are at:Home»Featured»Dolphin Tale and Rethinking Dominion
By Marc T. Newman, Ph.D. on September 30, 2011 Featured, MyChurchParish.com, On TV and Movies 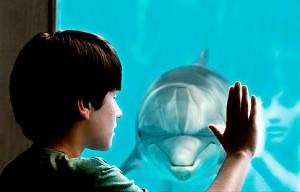 There are all kind of theories floating around about what life must have been like between Adam and Eve and the animals in the pre-fall Garden of Eden, but I wonder if it looked quite a bit like what I saw at the Clearwater Marine Aquarium last week. This impressive facility is the real-world setting of the film Dolphin Tale, which opens on Friday, September 23rd. Inspired by a true story, Dolphin Tale chronicles the rehabilitation of Winter, a very personable porpoise who plays herself in the film (helped along by some CGI and a very realistic animatronic double).

As a young dolphin, Winter got her flukes caught in a crab trap, and the damage was so severe that she lost her tail. In one of the most intriguing rehab stories I have ever seen, Dolphin Tale shows how human love and ingenuity combine to give new life to an otherwise doomed creature. The film is empowering and inspiring, and, for a movie some might mistakenly dismiss as a children’s film, brings with it some deeper ideas about loss, empowerment, and dominion.

As the film opens, we meet Sawyer (Nathan Gamble), an introverted young man who is more at home tinkering with his gadgets than playing outside with kids his own age. His closest friend is his cousin Kyle (Austin Stowell), a championship swimmer and new military recruit who is mere days away from shipping out on his first deployment. Sawyer, whose father left him and his mother, Lorraine (Ashley Judd), is fearful of again being alone. Stalwart Kyle tries to be reassuring, but Sawyer’s life is marked by fractured relationships, and assurances can feel shallow, particularly among adolescents beginning to discover that the world is not a simple or safe place. This fact is dramatically driven home when Sawyer comes across a beached dolphin, all tangled up in ropes, bleeding, with its tail hopelessly enmeshed in the wire of a crab trap. Despite the heroic efforts of the Clearwater Marine crew, this beautiful animal loses its tail, a potentially mortal injury.

Dolphin Tale does not shy away from confronting the difficulties of life – aquatic or human. Director Charles Martin Smith, in an interview, notes that everyone has personal issues that drive drama, but the focus her is not on the loss, but the power of love, family, and creativity to help us through tough times. “I wanted to emphasize the feeling of family that Sawyer finds when he gets to the aquarium. From the very first moment on the beach, when that truck pulls up and all the aquarium workers come out, and they surround Winter with such love, devotion, and care, how they’re all working together harmoniously – and the boy sees this. I wanted to make a movie where, sure, everybody has things that they are dealing with and struggles, but ultimately these family bonds are at work and positive.”

In Dolphin Tale’s moral universe, close family bonds and the willingness of people to love and help one another, are the key to recovery.

Difficult circumstances abound in Dolphin Tale, as they do in the real-world life of its audience members. Winter’s traumatic injury may prove fatal, another character suffers a life changing accident, families have lost parents through death or divorce, and kids struggle to find their place in the world. But Smith places the emphasis on empowerment, the ability to make the kind of changes that lead to recovery. And while the film portrays parents in a positive light, the key agents of change are the children.

But the kids in Dolphin Tale are not “super kids.” As Smith admitted, “A lot of films fall into the trap of writing kid characters who are a little too wise or a little too sassy, they just don’t read like real children, so I wanted these kids to react and to behave as much as I could like real kids, and to go through the things that kids really go through.”

Instead, Sawyer and Dr. Clay’s daughter, Hazel (Cozi Zuehlsdorff), work together with their parents and a creative prosthetics designer, Dr. Cameron McCarthy (Morgan Freeman) to save Winter, help the aquarium, and, through that work, extend hope to others. Smith explains, “We’re all in this together, in this world, and with this idea of family and extended family, you learn that you gain when you do for others, and I really wanted that to be at the heart of this movie.”

In real life, Winter is an inspiration to millions of disabled people. The innovations that have emerged from the prosthetic developments created for Winter have reduced or eliminated pain for many who wear prosthetics. And Winter’s exuberant joy of life, immediately apparent to anyone who meets her, is infectious. Dolphin Tale is a perfect vehicle to extend this experience beyond the walls of Clearwater Marine Aquarium to enable others to interact with this amazing mammal.

In one sense, Dolphin Tale is a story about the interaction of humans and animals in a relationship that the Bible calls dominion. In Genesis 1:26, God says, “Let Us make man in Our image, according to Our likeness; and let them rule over the fish of the sea and over the birds of the sky and over the cattle and over all the earth, and over every creeping thing that creeps on the earth.” Some people have mistakenly used the idea of dominion to argue that humans are allowed to do with the creation whatever they please. But our role on this planet is as stewards, not owners. And while it is true that we have permission to eat the plants and animals of this planet, we are also told to care for them. Proverbs 12:10 tells us “A righteous man has regard for the life of his animal, but even the compassion of the wicked is cruel.”

The idea of dominion is complicated. In Dolphin Tale, we see humans and animals interacting in mutually beneficial ways. Winter, left to her own devices in the wild, would surely have perished. Humans came and rescued her, cared for her, and helped her to recovery. She will never be released back into the wild, the needs of her rehabilitation prohibit it.

But Winter is not a charity case. She has given as she has received. Doctors have learned much about crafting comfortable prosthetics for humans as a result of working with Winter, and she has brought hope to many. The relationship Winter has with her real-world trainer and physical therapist, Abby Stone, is affectionate and real. What we see at play in Dolphin Tale is meaningful hierarchy at its best. It is my hope that watching the film will cause viewers to ask themselves the very question that Smith wrestles with: “What is our responsibility on this planet to this planet and the other creatures that inhabit it?”

Because of the niche-marketing approach to entertainment, Dolphin Tale is going to be marketed as a family film – and it is, of course, a great film for families. But don’t let the campaign fool you. Dolphin Tale is just as much a date film, a hero’s journey, a comedy, and a drama. If you like films about the triumph of the human – and porpoise – spirit, dive on in.