Trending Now
You are at:Home»Featured»Don’t Cry For Me, America: Comparing Argentina And The United States
By Alejandro A. Chafuen on June 17, 2013 Featured, Government & Politics, Law & Justice, The Economy 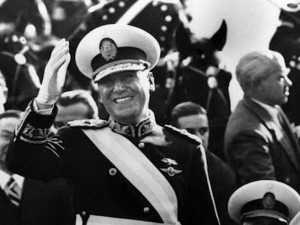 Many observers have pondered if the United States is following the same troubled path as Argentina. In the 1940s, Argentina’s Juan Domingo Perón used government agencies for political gain and created a popular form of fascism called Perónism. In the United States, the recent revelation of the Internal Revenue Service targeting political enemies is a bad omen. Are we on an Argentinean course?

The road to decay in my native country, Argentina, began with the implementation of one of the most powerful collectivist doctrines of the 20th century: fascism. The Labour Charter of 1927 – promulgated by Italy’s Grand Council of Fascism under Mussolini – is a guiding document of this doctrine and provides for government-based economic management. This same document recommends government provision of healthcare and unemployment insurance. Sound familiar?

Since adopting its own brand of fascism, “Justicialismo,” Argentina began to fall in world economic rankings.

When Perón assumed power shortly thereafter, he hastily expanded the role of government, relaxed central banking rules and used the bank to facilitate his statist policies. In just 10 years, the peso went from 4.05 per U.S. dollar to 18 in 1955 (and later peaked at 36 that same year). After Perón’s rule, Argentina further devalued its currency to 400 pesos per U.S. dollar by 1970.

Bipartisanship in bad policy-making can be especially damaging. Just as some of President Obama’s interventionist monetary policies were preceded by similar Bush administration policies, some of Perón’s policies were similarly foreshadowed: “Already before we reached power, we started to reform, with the approval and collaboration of the previous de facto regime,” said the populist.

Perón was removed from power in 1955 but his policies lived on. The “Liberating Revolution” claimed it was leading an effort to return to the free-market system dictated by the Argentine Constitution of 1853. But Argentines chose an interventionist, Raúl Prebisch, as minister.

Inflationary policies and political use of the monetary regulatory authority, especially after Perón’s first presidency, devastated the economic culture and rule of law of Argentina. In the United States, the Fed does not have all the powers delineated by Perón, and has not caused as much destruction as the Argentine central bank, but the process has been similar and more gradual. The U.S. dollar buys less than 10 percent of what it did in 1913 when the Federal Reserve was created, the debt limit increases regularly—thus stimulating further debt monetization—and monetary authorities have increased their arbitrary interventions.

Under Perón, government agencies gradually got involved in all areas of the economy. We see a similar pattern in the United States–many sectors of the economy now depend on control, encouragement, or direct management. Obamacare is the best example; it is Perónism or corporatism on steroids.

There are similarities beyond the economic realm. Unlike other populist leaders, such as Hitler and Mussolini, Perón did not have belligerent imperialist ambitions. The same can be said about President Obama. His conservative critics argue that he wants to reduce U.S. influence around the world. Moreover, Perón shunned the Argentine founding fathers who favored the free society. Likewise, President Obama is not prone to quoting Madison, Washington, or Jefferson.

But some major differences between cultures still exist, such as the “cult of the leader,” attacking mediating institutions (e.g., Catholic associations and the press), and appealing to the left as well as the right. Regarding the latter, Peron achieved vast influence over most of the three main components of fascism: labor unions, business corporations, and government. It’s not likely that a U.S. leader will gain control of all three of these in the near future. During the beginning of the Obama administration it looked as though much of the business world was on board, but if there was ever a honeymoon, it didn’t last long. The Chamber of Commerce, for example, voiced its opposition during the middle of Obama’s first term, and continues to voice its criticism on several fronts.

Other differences, so far, are:

A major source of hope in the United States is the strength and variety in governments among the 50 states and the richness of our civil society. Economic power is more diffused in the United Statesand some of it, as I noted in a recent column, is moving south to more conservative states. State spending and regulation has grown, but the federal government does not yet have the power to make the states follow all of its dictates and whims.

Pessimists may argue that the stage is set for an ambitious U.S. president, like it was for Perón, to make the majority of the economy dependent on government. From the year before Perón assumed power and to the end of his rule (1945-1955), total spending by the central government averaged 11% of GNP; this compares with 24% in the United States today. Argentine conservatives created regulatory agencies thinking they would be used for the common good. Likewise, U.S. conservatives have expanded government and regulations. The regulatory state is much larger today in the United States than in old Perónist Argentina. As with government spending, it can be used to control, encourage, or discourage business. Employed by both countries, excessive regulation is a more secretive means of picking winners and losers, which creates more opportunity for corruption. Perón understood that government spending and regulation could be used as tools of power to reward friends and punish enemies. He did it, and he ruined the Argentine dream.

What we’re seeing in many of today’s U.S. agencies, including the politicization of the IRS, demonstrates that the United States is not immune to the Argentine disease. Indeed, if we fail to preserve the institutions of the republic, the American dream will be in grave danger.