Trending Now
You are at:Home»Learn & Live the Faith»Catechesis»Don’t Forget the “Of The’s”
By Stacy Trasancos on October 30, 2012 Catechesis, Featured, MyChurchParish.com 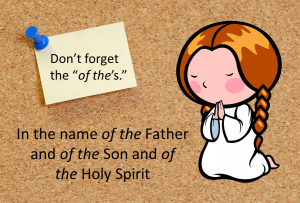 Sometimes little things make a big difference. I saw this reminder in a child’s catechism book, and it has become something we repeat daily around here. Don’t forget the “of the’s.” It is not correct to say, “In the name of the Father, Son, and Holy Spirit.” Why is that so important?

In the baptismal formula at the end of the Gospel of Matthew, Christ articulated it this way. “Going therefore, teach all nations: baptizing them in the name of the Father and of the Son and of the Holy Spirit.” The “of the’s” are intentional, they reveal and affirm the mystery of the Most Holy Trinity, the central mystery of Christian faith and life, the source of all the other mysteries of faith, the most fundamental and essential teaching.

The Church has guarded this truth through time, using precise words to defend all of the revealed mysteries the best we can. The three divine Persons in God are one — one essence, one nature, one being — One God, and they are also co-equal, co-omnipotent, co-eternal. The seemingly smallest error can lead to serious heresy, many have been addressed by Church councils.

The heresy of Subordinationism holds that the Son and the Holy Spirit are subordinate to God the Father. The Arian heresy, a form of Subordinationism, asserts that the Son is only a creature, not eternal or divine. Modalism, a form of Monarchianism, acknowledges that God is one, but denies that there are three persons, calling them instead “modes” or different forms God takes to do work. The Tritheism heresy says that the three persons are three different gods.

Consider the logical dangers of these heresies. If there are three gods, then who gave us the Ten Commandments? If the three persons are just modes, then in the baptismal formula we are needlessly repeating the same name over and over. If the Son and the Holy Spirit are less than the Father, then they are not actually God. If Christ is not God, then there was no Incarnation. If there was no Incarnation, then there is no Christianity.

Precise wording is of utmost importance, and while the “of the’s” may seem insignificant when we pray, they serve to affirm a most basic truth of Christianity, that there are three distinct, yet equal, Persons in One God. So, next time you are in a hurry and race through the words and the motions, slow down and defend against heresy. Don’t leave out those little words.