Trending Now
You are at:Home»Featured»Doug Giles’ Righteous and Rowdy Delivers
By J. Matt Barber on June 28, 2011 Featured, On Books 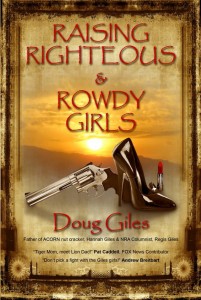 Dads, when you let the National Education Association, Hollywood and the cast from Glee raise your daughters, you shouldn’t be surprised if they turn out to be self-absorbed, painted little Paris Hilton wannabes. As Doug Giles, columnist and host of the nationally syndicated Clash Radio program puts it: “Fathers, don’t let your babies grow up to be Snookie!”

I know: easier said than done. Ever wish that fatherhood came with an instruction manual? Well, with his latest book, Raising Righteous and Rowdy Girls, Giles comes as close to anyone in producing it.

Throughout this page-turner, Doug’s unique blend of wit, wisdom and irreverent humor is sharpened to a razor’s edge. A guy after my own heart, Doug refuses to be “nicer than Jesus.” He slices and dices a godless culture bent on sexing-up and dumbing-down our sisters and daughters. As the father of two young girls, I can say this: Doug puts into print what every dad who’s worth his salt thinks, but may be afraid to say.

Pops, contrary to what the sex-obsessed “Heather has two mommies” thong-throng may imagine – you are an indispensible part of your baby girl’s healthy development. You only get one crack at this, so get it right.

Giles knows from which he speaks. He comes with his own set of impressive righteous-and-rowdy bona fides. You likely know of Doug’s oldest daughter, Hannah Giles. She became famous (or infamous if you’re a “progressive,” secular-socialist troglodyte) for being the second half of the investigative “pimp-prostitute” sting team that cracked all the nuts over at ACORN.

Doug’s younger daughter, Regis, is a Second Amendment advocate and founder of the “Girls Just Wanna Have Guns,” campaign. She’s also a big-game hunter. Rumor has it that she can knock the nose of a gnat from 300 meters. Both of these young ladies share CoverGirl looks, Grace Kelly class and Margaret Thatcher brains. It’s little wonder that feminists can’t stand ‘em.

Last year in an interview with CNN, Hannah was asked about her conservative-Christian worldview and how she was able, nearly single-handedly, to bring down one of the most powerful and corrupt “progressive” (but I repeat myself) organizations in America: “So what makes you so different? What makes you like this?” she was asked.

Her answer: “God, my family and Jujitsu.” Gotta love it.

From its press release:

What will this book teach you? Raising Righteous and Rowdy Girls is here to help fathers with daughters. In this book, Giles tables scores of road-tested, historically proven, can’t-miss principles for raising girls with a fighting spirit, discernment, a winning attitude, and a holy vision to overcome this feces-filled culture. You will learn in this quick read how to teach your daughters to fight, shoot guns, sense BS, be classy, despise anti-intellectualism, be visionaries, party without going Snookie, value hunting and the outdoors, esteem traditional convictions, and avoid the date from hell.

Dads, read the book. You’re little princess will thank you – right after she mops the floor with that first unfortunate schmuck to get a little too handsy.