Trending Now
You are at:Home»Featured»Downgrading America: S&P Declares the Obvious
By Fred A. Kingery on April 25, 2011 Featured, The Economy 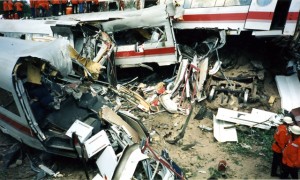 If you had been living on another planet the last three years, you would be shocked to learn that the credit-rating agency, Standard and Poor’s (S&P), has placed the current AAA credit rating for the debt issued by the U.S. Treasury on a “negative watch” status. Most of us who live on planet earth had already concluded that the credit worthiness of our sovereign debt would be downgraded—unless Congress and the president were to fix the nation’s debt problem. Although the financial markets reacted to this “negative watch” news as if it wasn’t really news, S&P did get the nation’s attention. After all, it was the first time since the attack on Pearl Harbor (70 years ago) that a downgrade on the outlook for U.S. Treasury securities had been issued. Like Pearl Harbor, Americans don’t have a minute to waste in responding to the threat.

What prompted this change in the credit outlook by S&P? To answer that question, consider the following:

Suppose you were to buy a home using a 30-year, fixed-rate, $200,000 mortgage that cost you 5 percent. Your monthly payment would be $1,070 for 30 years. Your debt level is initially fixed and declines going forward. Other than the assumption that you have the income security to maintain the monthly payments, the risks associated with the debt and its cost are defined and fixed.

Now consider the case of our national debt. The level of debt is not fixed. It’s set to grow almost exponentially going forward. The cost of funding the debt is not fixed either. Current Treasury debt yields are at a historic low and set to rise going forward. The assumption that we have the ability as a nation of taxpayers to service our debt via tax revenue is dependent on the variability of the growth rate of the U.S. economy going forward. Clearly, the risk connected to our ability to service our nation’s debt is not defined and fixed; yet, it’s set to rise dramatically.

Specifically, the total federal debt level will exceed $14.3 trillion in the very near future. The portion of that debt held in the form of marketable securities is over $9 trillion. The current interest expense on the marketable portion of the debt is $200 billion (2.2 percent). Over 20 percent of this debt will mature in under one year and just under 50 percent of the debt will mature in less than three years. Moreover, the annual deficit (new debt) is projected to be over $1.5 trillion and will remain as an additional ongoing annual borrowing requirement for as far as the eye can see.

America’s current borrowing cost is at a historic low of about 1 percent compared to a historical average cost of funding slightly over 5.5 percent. As noted above, the current annual budget interest expense is projected to be $200 billion per year. What happens if the cost of financing returns to anywhere near the historic average of over 5.5 percent?

A recent analysis published by Lawrence B. Lindsey projects that marketable debt held by the public could rise to $13.1 trillion by 2015 and $16.7 trillion by 2019. The interest expense is projected to rise to $847 billion by 2015 and $1.15 trillion by 2019. As a percent of the tax revenue flowing into the federal treasury, interest expense could easily exceed 30 percent and approach as much as 50 percent. All other forms of budget expenditure would be threatened by this major claim on the nation’s tax base. This is the future financial trap being laid out by the policies of the current government and finally being acknowledged by S&P.

Oh, and here’s the rest of the news flash S&P forgot to mention for our professional political class in Washington:

The day of reckoning for this national financial train wreck is approaching much faster than you think. The federal government’s current policies of extend and pretend will no longer appease the financial markets. If our politicians don’t fix the nation’s debt problem on their own terms now, with substantive and credible policy changes, then the financial markets will fix the problem for them later. Specifically, later is sometime between now and the November 2012 elections. The clock is ticking.

Fred A. Kingery is a self-employed, private-equity investor in domestic and international financial markets from New Wilmington, Pa., and a guest commentator for The Center for Vision & Values at Grove City College.