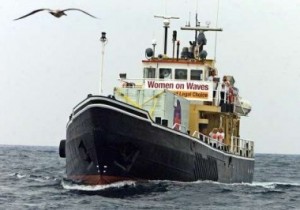 Moroccan authorities have taken action against the floating abortion mill commandeered by the Dutch abortion group Women on Waves.  In a press release today, the abortion activist group notes that their ship was due to arrive in the harbor of Smir at 1pm local time but was blocked by warships.

“Marina Smir has been completely closed,” says the release. “Warships now block the entrance for the ship of Women on Waves.”

On shore, according to Australian news reports, abortionist Rebecca Gomperts the head of the organization was taken away by police for her own protection after protesters carrying graphic abortion photos called her a “terrorist” and an “assassin.”

The abortion ship offers to use the abortion drug regimen called RU-486, a combination of Mifepristone and Misoprostol, for women with early term pregnancies. Women on Waves claims that according to international law, if the boat is outside a 12-mile radius from shore, Dutch law applies to the boat, allowing “medical” or chemical abortions on board.

But according to reports, few actual abortions are carried out on the ship; instead, it is mainly a method of generating publicity for local abortion campaigners. The group claims to have “created enormous public interest in its efforts and has completed successful campaigns in Ireland (2001), Poland (2003,) and Portugal (2004), and Spain (2008).”

In reality however, as LifeSiteNews reported yesterday, the Women on Waves abortion ship has received less than enthusiastic greetings from many of the countries it has visited. In 2003, when it went to Poland, the ship was searched for illegal abortion drugs by customs officials. It was later pelted with eggs and paint by a large group of students protesting its presence in Gdansk, the cradle of the Polish Solidarity movement. The Archbishop of Gdansk, Tadeusz Goclowski, said, “We must not let criminals enter our territorial waters and perform crimes on our children.”

In 2004, the Portuguese government refused the ship permission to enter Portugal’s territorial waters, a decision that was later upheld by the country’s courts. Then-secretary of state for sea affairs, Nuno Fernandes Thomaz, told the daily newspaper Diraio de Noticias, “If the ship decides to disrespect the orders of the Portuguese government it will have to get round a navy vessel”.

In 2007, when Women on Waves founder Rebecca Gomperts went to Malta to deliver a lecture in favour of legalized abortion, she was met by more protesters who held a candlelight vigil outside the lecture venue and the press conference had to be closed to the public.