Trending Now
You are at:Home»Learn & Live the Faith»Evangelization»Earthly Sucker or Eternal Fool
By Guy McClung on December 24, 2014 Evangelization, Featured, Live in Christ 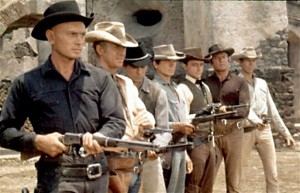 The Magnificent Seven is one of the definitive Westerns, with timeless themes, Oscar-nominated music, gun play (and knife play),  and characters whose goodness or evil is never in doubt. Harry Luck (Brad Dexter) is one of the six gunmen that Chris Adams (Yul Brynner) recruits to help a small Mexican village raided periodically by marauding native bandits led by the evil Calvera (Eli Wallach).

After some skirmishes with Calvera and his men,  confronted with dim prospects and overwhelming numbers, Harry rides off. But in the final battle, Harry returns and saves Chris’s life.  Harry lies fatally wounded after Calvera has been killed.

HARRY. Chris… I hate to die a sucker. We didn’t come here just to keep an eye on a lot of corn and chili peppers, did we? There was something else all along, wasn’t there?

CHRIS. Yes, Harry. You had it pegged right all along.

HARRY. I knew it. What was it?

CHRIS. Gold. Sacks of it.

HARRY. Sounds… beautiful. How much?

CHRIS. At least a hundred and fifty.

HARRY. My cut would have been what?

CHRIS. Maybe you won’t be.

Was Harry damned? Did Harry die a sucker?

An “earthly sucker” is one who lives to accumulate wealth, who seeks celebrity and fame, and who experiences all the pleasure possible here and now before death. The earthly sucker lives, and dies, chanting: “Eat, drink and be merry, for tomorrow you may die.” Based on this, Harry Luck did die a sucker. But was he also an eternal fool?

In the Gospel of St. Luke, Jesus teaches a parable about an “earthly sucker.”

Then he said to them, “Watch out! Be on your guard against all kinds of greed; life does not consist in an abundance of possessions.” And he told them this parable: “The ground of a certain rich man yielded an abundant harvest.  He thought to himself, ‘What shall I do? I have no place to store my crops.’

Then he said, “‘This is what I’ll do. I will tear down my barns and build bigger ones, and there I will store my surplus grain.  And I’ll say to myself, You have plenty of grain laid up for many years. Take life easy; eat, drink and be merry.’

“But God said to him, ‘You fool! This very night your life will be demanded from you. Then who will get what you have prepared for yourself?’

“This is how it will be with whoever stores up things for themselves but is not rich toward God.” (Luke 12:15-21).

One of the most interesting things about this parable of Jesus is that he says “But God said . . .” It is no person, no wife, no child, no centurion, no husband, no priest, no father, no official, no beggar that speaks – it is God Himself.  And God tells this man he is an earthly sucker, a fool, because he sought material things and not things of true life.The earthly sucker may “gain the whole world” and in doing so “suffer the loss of his own soul.” (Matthew 12:6-26).

The divine condemnation of the earthly sucker in the parable of the rich man can be restated to show how God would address an eternal fool, a fool for others:  “You are one of my eternal fools and I will bestow on you the infinite treasure you have laid up for yourself in Heaven with Me.”

In the world’s terms of what is of value and what matters, each person who lives for others in self-sacrifice is a fool. St. Paul urges each of us to be one of God’s eternal fools:

“Let no man deceive himself. If any man among you seemeth to be wise in this world, let him become a fool, that he may be wise. For the wisdom of this world is foolishness with God.” (1 Corinthians 3:18-19).

Back to dying Harry Luck. No gold, no cattle, no payroll.  Clearly an earthly sucker. Clearly in earthly terms Harry was a fool to return, a fool to die as he did,  defending his friends. This is why Chris thinks that maybe Harry will not “be damned.” As Matthew says, “He who would save his life will lose it; but he who loses his life for my sake will find it.” (Matthew 16:25)

A very good case can be made that the lure of the world and the drive to lay up treasure and pleasure here and now is much stronger in our modern me-me-me-now-now-now culture than at any time in history. C.S. Lewis has this to say in The Weight Of Glory:

And you and I have need of the strongest spell that can be found to wake us from the evil enchantment of worldliness which has been laid upon us for nearly a hundred years. Almost our whole education has been directed to silencing this shy, persistent, inner voice; almost all our modern philosophies have been devised to  convince us that the good of man is to be  found on this earth. And yet it is a remarkable thing that such philosophies of Progress or Creative  Evolution themselves  bear reluctant witness to the truth that our  real goal is elsewhere. When they want to convince you that earth is your home, notice how they set about it. They begin by trying to persuade you that earth can be  made into heaven…

Choose selflessness and this present world will laugh at you, deride you, reject you, and ridicule you. It’s a hard choice, but it is your choice, every day – earthly sucker or eternal fool?