Trending Now
You are at:Home»Featured»Egypt – Murder by the Cathedral
By ACN-USA News on July 3, 2013 Featured, International Issues, Those in Need 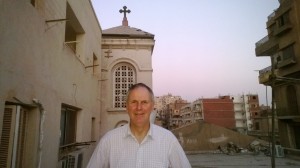 A representative of international Catholic pastoral charity Aid to the Church in Need (ACN) has given a first-hand account of last weekend’s mass protest in Egypt in which at least three people died in a drive-by shooting near Assiut’s Coptic Catholic Cathedral.

Passing on appeals for prayers for peace from two senior clerics, ACN’s Neville Kyrke-Smith described being in Assiut, on the banks on the Nile in Upper Egypt, as the city was consumed by protests.

Mr. Kyrke-Smith said, “I left Assiut last night [Sunday 30th July] where there was a lot of violence in the streets and protests taking place.”

“Sadly, speaking to Bishop Kyrillos William of Assiut, whom I was staying with, I’ve learnt that the estimates are that at least three have died, maybe four or five… when some motorcyclists rode past an anti-Morsi protest and shot into the crowd.”

There was unrest across the country during a weekend of demonstrations marking one year since Mohammed Morsi became the country’s first Islamist president.

Up to 50,000 people were estimated to be protesting in Assiut last night with reports stating that seven million people turned out to protest across Egypt.

Mr. Kyrke-Smith passed on a plea from Bishop Kyrillos to pray for the Christian community in a country being racked by protests.

The bishop said, “We are here to serve all people and ask our friends at Aid to the Church in Need please pray for us.”

“We trust in Christ, we love Christ and trust that Christ will help us, and we really appreciate, at this time, the prayers of all our friends.”

Speaking to Bishop Johannes Zakaria in Luxor this morning (Monday 1st July), Mr. Kyrke-Smith was asked to convey the message that the Church was praying for peace and for all citizens of Egypt regardless of religion.

Bishop Zakaria said, “We are praying for everyone. We are not against Muslims, we are for everyone. The Muslims are my friends and we pray for all, for the people of Egypt… we pray for our brothers and sisters that we may pray in peace and live in faith.”

He added a message to ACN’s benefactors: “[We are] trusting that you, our friends and benefactors, will continue in prayer.”

“We pray, in this continuing time of anxiety for all the peoples of Egypt, for a way forward through what seems to be becoming another revolution and we pray that there will be no more bloodshed, no more violence.”