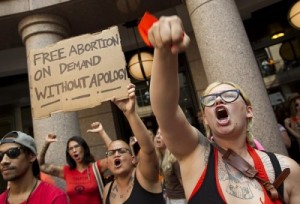 So a radical feminist and two childless women walk into a courtroom. How do you expect them to rule on abortion or contraception? Their lives as they know them, depend on both.

In Whole Woman’s Health vs. Hellerstedt, the U.S. Supreme Court overturned a Texas law regulating abortion clinics as if they were any ordinary medical facility. You have no doubt heard that this was somehow a victory for women, in the ongoing and everlasting War Against Women.

Actually, I believe there is no War Against Women, but a long-standing War Among Women. And this time, like most of the time, Elite Women prevail over “Everywoman.”

Consider the three women currently serving on the U.S. Supreme Court. Whose interests do these women actually represent?

The most senior female member of the court is Justice Ruth Bader Ginsburg, a lifelong radical feminist. Let’s look for a moment at her personal life. Justice Ginsburg had the lifelong support of her husband in her career aspirations. Thanks to no-fault divorce, women today cannot count on a lifetime of mutual support with their husbands.

Justice Ginsburg came of age in the short historical window of time when women could still get married, have kids, go to law school, and have a career after child-bearing. Her two children were born when she was 22 and 32, in 1955 and 1965 respectively.

Thanks to radical feminism, highly educated women have a much more difficult time doing these things. They can go to law school and have a career all right. But getting married and having children sometime before menopause, not so much. Justice Ginsburg has been safely insulated from the negative fallout of the Sexual Revolution which she and her radical feminist colleagues did so much to champion.

The other two women on the Supreme Court, Justices Elena Kagan and Sonia Sotomayor, are childless.

It is highly unlikely that the two of them understand the aspirations of women who want their babies and stable marriages. For most women, family is everything and “career” is a way to put food on the table. Elite women know nothing of Everywoman, the people who have endured the Sexual Revolution, and who do not have high status jobs as compensation.

I am acutely aware of all this because I am a bit of an outlier among my educational class. That is a fancy way of saying I am a freak. I left a tenured university position back in 1996 to give more attention to my children who needed me, and my husband who wanted me and who I, in turn, wanted. No one gives up tenure. Believe me. My friends quietly thought I had lost my mind, except for one dear friend who told me I was a counter-cultural radical.

I had been in line to become the head of my department. Obviously, that didn’t happen. I never sat on any prestigious commissions. I haven’t received a plum political appointment like my childless or male peers have. Mind you, I’m not complaining. I do not regret my choices for a moment. I have encountered plenty of other women with advanced degrees who have made similar choices with no regrets.

No, my point is different. Delayed childbearing is the price of entering the professional classes. Tenacious focus is the price of remaining in the upper echelons of those classes. Placing a high personal value on life, marriage, family and the next generation puts a woman at a disadvantage in the competition for high-end jobs.

Put another way, childless women have an advantage over mothers in the competition for power and influence. For many elite women, the Sexual Revolution has made possible their lives as they know them. They literally cannot imagine what their lives would be like without contraception, or without abortion as an easy back-up.

The Sexual Revolution has been an imposition by the elites upon the masses. From the beginning, it is the people of modest means who have suffered from no-fault divorce, and hook-ups and instability and relationship churning and non-marital childbearing.

The Everyman and Everywoman regularly vote for lawmakers who promote pro-life legislation. But elites in the judiciary consistently overturn it. And that is what happens when a radical feminist and two childless women walk into a courtroom.

Originally published by The Blaze. Reprinted with permission.