Trending Now
You are at:Home»Featured»Feminism vs. Feminine
By Patti Maguire Armstrong on April 27, 2012 Featured, Women 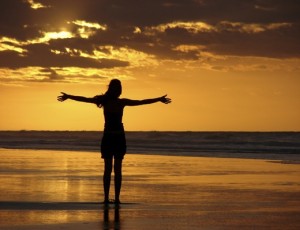 I am a recovering feminist. Getting married in the Eighties was my first step when I changed my mind about keeping my own name. I went with logic. A long hyphenated name would be nothing but trouble over the long haul. And what does the second generation do if two people with hyphenated names marry each other?

Keeping my own name would have created problems after the children came–Is that your stepmother? Why doesn’t everyone in your family have the same last name? That’s how my deprograming began.
Just as making an inconvenient, illogical choice for a name is irrational, so I’ve learned is much of feminism. I am not referring to the belief that woman are deserving of equal dignity as men; that is a given. Rather, I refer to radical feminists who chronically criticize the Vatican as archaic and dangerous to women, and include abortion among their demands for equal rights.  Such feminism is not feminine. Instead, it distorts our strengths and turns them into weaknesses—something to overcome rather than to treasure.
Reverse Interpretation
Often, radical anti-Bible feminists blame Scripture for discriminating against women. However, consider the differences of interpretation below. (Thoughts are gleaned from Alice von Hildebrand’s book, The Privilege of Being a Woman.)
Feminist: God created Adam first and Eve was just made to keep him company so from the beginning the Bible devalues women.
Truth: Being created last does not indicate inferiority. God created in ascending line from inanimate to plants to animals to man to woman. If sequence of events was the criteria, it would elevate, not devalue women.
Feminist: Adam is presented as superior to woman since it is his rib God made Eve from.
Truth: Is being made from a rib less than being fashioned from the dust of the earth?
Feminist:  Eve received the harder punishment, consigned to the pains of childbirth
Truth: Suffering pain to bring life into the world is a premonition to Christ suffering to redeem us and give us eternal life.  Punishment or divine role?
Feminist: A woman is blamed for ushering sin into the world.
Truth: The New Eve, Mary, brings us the fruit of salvation through her motherhood to Jesus Christ. Only Mary is present and directly involved when the message of an angel announces the greatest privilege ever to be bestowed on a human, taking part in the mystery of the incarnation, where Jesus becomes flesh.
Feminist:  Women are not treated as important in the Bible.
Truth: The Stations of the Cross honors women. Jesus meets his mother, Veronica wipes his face, he comforts the women of Jerusalem, and it is women and just one man, John, who stood at the foot of the cross. After the resurrection, Jesus appeared to the women at the tomb before appearing to his apostles. The men did not even believe at first.
Mixed Up
Much of the confusion lies in what it means to be weak and what it means to be strong. Jesus taught his apostles that the greatest among them must serve the others. Too often, modern women think their greatness lies in power and control.  But God often uses the weak to shame the strong and told us that there is power in weakness. “That is why, for Christ’s sake, I delight in weaknesses, in insults, in hardships, in persecutions, in difficulties. For when I am weak, then I am strong”  (2 Corinthians 12-10).
No one will deny that individual men throughout the ages have denigrated women. Hildebrand points out in her book that such treatment is a consequence of original sin in which Adam and Eve wanted to become equal to God, without God. She summarized our distorted values by stating, “…the glorification of strength and the denigration of weakness has become the shallow core of modern thought and feminist belief.”
The most perfect human ever made was a woman—Mary.  The Bible does not denigrate women, it uplifts us. God made us male and female not good and better.   Trying to be more like men makes us less of what we were created to be.
All who seek God have equal access to the grace we need to live out God’s plan for us. “There is neither Jew nor Greek, slave nor free, male nor female, for you are all one in Christ Jesus” (Galatians 3:28)
Rather than being prideful and seeking status and power, we must be driven by a desire to follow where God leads us.  Consider that St. Joan of Arc was only a girl of nineteen when she was executed in 1431 for her role in leading the French troops against England.  At seventeen, she was the youngest person in history to lead and entire nation’s army. Her victories are considered among the greatest in history.
Unfortunately, Joan was captured and put on trial for heresy by her English enemies under the auspices of a Church trial.  Her greatness, though,  was not something born of feminism but of following God’s call.
Greatness is not measured by a worldly standard. That is where feminism goes astray. Rather than clinging to the God-given dignity of women, feminism seeks to take control of the world and define victory in human terms.
This is not to say that barefoot and pregnant is the default setting for all women. I have an advanced degree and I support my daughters continuing their education. At the same time, I do not see titles and high positions as trumping motherhood. We all must follow our own path but I hope it is the path laid out for us by God and not one in which we blaze our own trail without him.
Share. Twitter Facebook Google+ Pinterest LinkedIn Tumblr Email
Previous ArticlePoem: “Adoration”
Next Article The “Hatchet Man” Turned Bridge-Builder