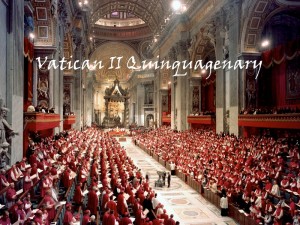 Nave of St. Peter’s Basilica During a General Session of Vatican II

Today begins the Holy Year of Mercy 2015-2016, on the 50th anniversary (“quinquagenary”) of the closing of the Second Vatican Ecumenical Council.

I have chosen the date of 8 December because of its rich meaning in the recent history of the Church. In fact, I will open the Holy Door on the fiftieth anniversary of the closing of the Second Vatican Ecumenical Council. The Church feels a great need to keep this event alive. With the Council, the Church entered a new phase of her history. The Council Fathers strongly perceived, as a true breath of the Holy Spirit, a need to talk about God to men and women of their time in a more accessible way. The walls which for too long had made the Church a kind of fortress were torn down and the time had come to proclaim the Gospel in a new way. It was a new phase of the same evangelization that had existed from the beginning. It was a fresh undertaking for all Christians to bear witness to their faith with greater enthusiasm and conviction. The Church sensed a responsibility to be a living sign of the Father’s love in the world.

Bl. Paul VI had addressed the ecumenical council, Dec. 7, 1965, the day before its formal closing:

The Church has gathered herself together in deep spiritual awareness, not to produce a learned analysis of religious psychology, or an account of her own experiences, not even to devote herself to reaffirming her rights and explaining her laws. Rather, it was to find in herself, active and alive, the Holy Spirit, the word of Christ; and to probe more deeply still the mystery, the plan and the presence of God above and within herself; to revitalize in herself that faith which is the secret of her confidence and of her wisdom, and that love which impels her to sing without ceasing the praises of God. “Cantare amantis est” (“Song is the expression of a lover”), says St. Augustine (Serm. 336; P. L. 38, 1472).

The council documents — especially the ones on divine revelation, the liturgy, the Church, priests, Religious and the laity — leave wide open to view this primary and focal religious intention, and show how clear and fresh and rich is the spiritual stream which contact with the living God causes to well up in the heart of the Church, and flow out from it over the dry wastes of our world.

But we cannot pass over one important consideration in our analysis of the religious meaning of the council: it has been deeply committed to the study of the modern world. Never before perhaps, so much as on this occasion, has the Church felt the need to know, to draw near to, to understand, to penetrate, serve and evangelize the society in which she lives; and to get to grips with it, almost to run after it, in its rapid and continuous change. This attitude, a response to the distances and divisions we have witnessed over recent centuries, in the last century and in our own especially, between the Church and secular society — this attitude has been strongly and unceasingly at work in the council; so much so that some have been inclined to suspect that an easy-going and excessive responsiveness to the outside world, to passing events, cultural fashions, temporary needs, an alien way of thinking… may have swayed persons and acts of the ecumenical synod, at the expense of the fidelity which is due to tradition, and this to the detriment of the religious orientation of the council itself. We do not believe that this shortcoming should be imputed to it, to its real and deep intentions, to its authentic manifestations.

We prefer to point out how charity has been the principal religious feature of this council. Now, no one can reprove as want of religion or infidelity to the Gospel such a basic orientation, when we recall that it is Christ Himself who taught us that love for our brothers is the distinctive mark of His disciples (cf. John 13:35); when we listen to the words of the apostle: “If he is to offer service pure and unblemished in the sight of God, who is our Father, he must take care of orphans and widows in their need, and keep himself untainted by the world” (James 1:27) and again: “He has seen his brother, and has no love for him; what love can he have for the God he has never seen?” (1 John 4:20)….

But one thing must be noted here, namely, that the teaching authority of the Church, even though not wishing to issue extraordinary dogmatic pronouncements, has made thoroughly known its authoritative teaching on a number of questions which today weigh upon man’s conscience and activity, descending, so to speak, into a dialogue with him, but ever preserving its own authority and force; it has spoken with the accommodating friendly voice of pastoral charity; its desire has been to be heard and understood by everyone; it has not merely concentrated on intellectual understanding but has also sought to express itself in simple, up-to-date, conversational style, derived from actual experience and a cordial approach which make it more vital, attractive and persuasive; it has spoken to modern man as he is.

On that same day, Dec. 7, 1965, Pope Paul VI and Patriarch Athenagoras I of Constantinople lifted the mutual excommunications that had been pronounced in 1054:

4. Since they are certain that they express the common desire for justice and the unanimous sentiment of charity which moves the faithful, and since they recall the command of the Lord: “If you are offering your gift at the altar, and there remember that your brethren has something against you, leave your gift before the altar and go first be reconciled to your brother” (Matt. 5:23-24), Pope Paul VI and Patriarch Athenagoras I with his synod, in common agreement, declare that:

A. They regret the offensive words, the reproaches without foundation, and the reprehensible gestures which, on both sides, have marked or accompanied the sad events of this period.

B. They likewise regret and remove both from memory and from the midst of the Church the sentences of excommunication which followed these events, the memory of which has influenced actions up to our day and has hindered closer relations in charity; and they commit these excommunications to oblivion.

C. Finally, they deplore the preceding and later vexing events which, under the influence of various factors — among which, lack of understanding and mutual trust — eventually led to the effective rupture of ecclesiastical communion.

Indeed, Pope Francis remarked, Sunday, Dec. 6th, on the significance of that occasion:

We mark the 50th anniversary of a memorable event between Catholics and Orthodox. On Dec. 7, 1965, in the vigil of the conclusion of Vatican II, with a common declaration from Paul VI and Ecumenical Patriarch Athenagoras, the sentences of excommunication exchanged between the Church of Rome and Constantinople in 1054 were eliminated. It is truly providential that this historic gesture of reconciliation, which created the conditions for a new dialogue between Orthodox and Catholics in love and truth, would be marked precisely at the beginning of the Jubilee of Mercy. There is no authentic path toward unity without a petition for forgiveness, to God and between us, for the sin of division. Let us recall in our prayer the dear Ecumenical Patriarch Bartholomew and the other leaders of the Orthodox Churches and let us ask the Lord that relations between Catholics and Orthodox be always inspired by fraternal love.

The next day, Dec. 8, 1965, Bl. Paul VI formally closed the council with In Spiritu Sancto:

The Second Vatican Ecumenical Council, assembled in the Holy Spirit and under the protection of the Blessed Virgin Mary, whom we have declared Mother of the Church, and of St. Joseph, her glorious spouse, and of the Apostles SS. Peter and Paul, must be numbered without doubt among the greatest events of the Church. In fact it was the largest in the number of Fathers who came to the seat of Peter from every part of the world, even from those places where the hierarchy has been very recently established. It was the richest because of the questions which for four sessions have been discussed carefully and profoundly. And last of all it was the most opportune, because, bearing in mind the necessities of the present day, above all it sought to meet the pastoral needs and, nourishing the flame of charity, it has made a great effort to reach not only the Christians still separated from communion with the Holy See, but also the whole human family.

At last all which regards the holy ecumenical council has, with the help of God, been accomplished and all the constitutions, decrees, declarations and votes have been approved by the deliberation of the synod and promulgated by us. Therefore we decided to close for all intents and purposes, with our apostolic authority, this same ecumenical council called by our predecessor, Pope John XXIII, which opened October 11, 1962, and which was continued by us after his death.

We decide moreover that all that has been established synodally is to be religiously observed by all the faithful, for the glory of God and the dignity of the Church and for the tranquility and peace of all men. We have approved and established these things, decreeing that the present letters are and remain stable and valid, and are to have legal effectiveness, so that they be disseminated and obtain full and complete effect, and so that they may be fully convalidated by those whom they concern or may concern now and in the future; and so that, as it be judged and described, all efforts contrary to these things by whomever or whatever authority, knowingly or in ignorance be invalid and worthless from now on.

On that same day, Dec. 8, 1965, several messages were addressed by the council fathers to various groups:

Here are the Council’s sixteen documents in English at the Vatican website:

They are also at the EWTN website, Second Vatican Council: the 16 Documents, and at IntraText, Vatican Ecumenical Council II.