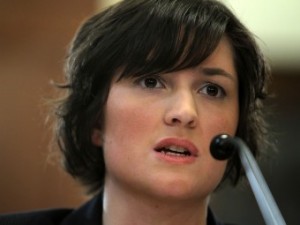 Sandra Fluke was once a law student at Georgetown University. One day, in 2012, the Speaker of the House of Representatives—pro-abortion Catholic Nancy Pelosi—held a Congressional hearing specifically to hear testimony from one witness. That witness was Sandra Fluke.

According to reports, Fluke had been blocked from testifying at a House Oversight and Government Reform Committee hearing the previous week—a hearing that dealt with the 2010 healthcare law regulation requiring employers and insurers to provide contraception coverage to their employees. So Pelosi felt obliged to set aside time to hear from this young reproductive rights activist, giving her a credible platform to repeat the vintage Planned Parenthood arguments dealing with the trumped-up reasons why women need birth control and why they need taxpayers to subsidize it.

Fluke’s meteoric rise in the world of birth control madness skyrocketed when she accompanied President Obama to Colorado as he stumped for his second term as president. Fluke has been heard from and seen in various places since that time. During 2013, she has uttered a statement or two that I would hope even dyed-in-the wool feminists would find over the top. For instance, appearing on MSNBC on November 27, “Fluke argued that employers cannot be exempted from the contraception mandate in Obamacare because that would mean they could also opt out of paying for insurance that covers blood transfusions.”

Yes, that’s right. The woman who said earlier this year that “extreme employers” who oppose the Obama contraceptive mandate might also oppose leukemia treatment appears to suffer from hallucinations.

The very idea that anyone would equate government-mandated birth control with treatment for serious diseases like leukemia or procedures such as blood transfusions is mind-boggling.

So let’s get this straight. Companies against the government forcing them to fund something that goes against their religious beliefs—that 99 percent of the time is nothing more than preventative care to allow women to have sex without consequences—is the same thing as denying someone life-saving treatment to fight against cancer? Talk about delusional.

It’s even more ridiculous when you consider that there’s already a free form of contraception. It’s called don’t have sex if you don’t want a baby! But then, that of course requires us to accept that human beings are not animals who are incapable to fighting our urges. People like Sandra Fluke want us to feel like sex is something that we need to survive, like food or air.

Fluke’s brand of mystical madness is as shrewd as it is silly. You see, the culture wants to think that we are nothing more than sexual animals that have appetites that should not have to be controlled. This is why Fluke gets away with the rubbish she is purveying on behalf of those who, like her, prefer perversion to conversion.

Why practice self-control, these misguided zealots argue, when the taxpayers are going to subsidize the opposite? We get it, Fluke, but we are not buying it.

We know that the media and many in public education have bought into the very same tainted approach to human sexuality and that they even teach it with abandon. Yes, organizations like Planned Parenthood, with our tax dollars, teach it to children as early as kindergarten.

Perhaps this is why so many of our fellow countrymen today suffer from the false notion that it is better to be free of all personal responsibility than to learn the value of self-control. What America needs is more common sense rather than this nonsense.

It’s high time, folks, that Fluke gives herself a time out.