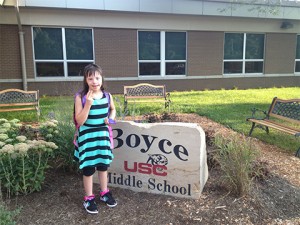 In 2003 my beautiful daughter Chloe was born with a diagnosis of Down syndrome, and I must admit my family was filled with fear, anxiety and uncertainty about Chloe’s future. At the time I was in my 20th year as a Police Officer, and I had no knowledge of supports for children like Chloe. When we left the hospital with our daughter we were soon connected to Early Intervention/Early Childhood Education services which made a priceless impact on Chloe’s early development from birth to age 5 when 85%+ of brain development occurs. These early education programs made such an amazing impact on Chloe and my family that I decided to leave my career as a police officer, return to college, and I now work as a professional and advocate in the field of Early Intervention.

As an Early Intervention/Early Learning professional I was very excited this past week to read an article titled “Fascinating Research Demonstrates Unborn Children Can Learn.” The article stated “A group of scientists at the University of Helsinki has published findings in Proceedings of the National Academy of Sciences that show that children are capable of learning and retaining information much earlier than previously believed possible – before even being born! More specifically, they have found that babies in the third trimester were able to retain and recognize specific words. These unborn babies are, in fact, learning language while still in the womb.” This research and evidence clearly shows that unborn children are prenatal students in the womb classroom where much early learning is taking place.

Thanks to Early Intervention/Early Childhood Education my 10 year old daughter Chloe is currently attending 5th grade fully included at her neighborhood middle school, and Chloe reads at a 5th grade level. “Inclusion” is a very important focus in the disability community, and early learning provides the foundation for a lifetime of inclusion and success. During a child’s education there are many tests given to determine ABILITIES and focus on supports and adaptations to ensure success. Traditionally a test score of 90%+ indicates a high level of success in an area of study, but there currently are prenatal tests that have a 90%+ termination rate that must be viewed as a failing grade. These prenatal tests for Down syndrome have allowed our misguided culture to label many prenatal students as “defective” and exclude them from being born into the classroom of life. With rapid advances in prenatal testing occurring we all need to examine which group of prenatal students will next be denied Life Inclusion because they are viewed as failures before birth.

I meet and communicate with policymakers frequently to show how critical early investment is for all children and families, and now evidence, research and science clearly link early learning to the womb classroom. It is time for our culture to embrace and include all prenatal students in the classroom of life, and when that is accomplished we will receive an A+ grade for the most important test our society is facing – “A matter of Life and death.”