Trending Now
You are at:Home»Learn & Live the Faith»Live in Christ»For a Greater Glory: The Fourth Vow of An Ancient Order of Friars
By Kevin Banet on June 20, 2012 Live in Christ, Vocations 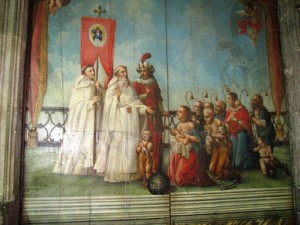 These virtues present themselves over and over again in the stories of the many martyrs for the faith. The movie in theaters now, “For Greater Glory,” awes the public with its gutsy stories of the religious and lay martyrs of Mexico, who chose horrible torture and death rather than renounce their love of God and of the Church.

The film, set in the 1920s and 30s, brings to light a similar martyrdom at the same time, of those in Spain, among whom were nineteen Mercedarian friars. Servants of God Mariano Alcala Perez and eighteen companions of the Order of the Blessed Virgin Mary of Mercy were confirmed as martyrs last December by the Vatican, which stated that they were killed “in hatred of the faith in Spain” between 1936 and 1937.

The heroism and sanctity of the Mercedarian friars present themselves over and over again in the stories of many friars of the Order of the Blessed Virgin Mary of Mercy. And well they should. The particular charism and fourth vow of this Order is not one to be taken lightly: to redeem Christian captives in danger of losing their faith – even at the cost of their own lives.

Beginning in thirteenth-century Spain, the Mercedarian friars began their rescue mission by freeing Christians enslaved and tortured by the Saracens, or in Spain, the Moors, who occupied that country and Portugal for about eight hundred years. To the Moors, it was not profitable to kill their captives, as doing so would mean forgoing ransom money. The real danger as perceived by St. Peter Nolasco, the Order’s founder, was that Christians would commit apostasy and abandon the Catholic faith.

The redemptive work of the Order proceeds from the great mercy and compassion of the Holy Trinity. Those to whom the Mercedarians minister have been both Christians in captivity under the Moors and Saracens and other enemies, but also today the whole human race, captive and enslaved by the power of the devil.

“This is an awesome responsibility,” states Fr. Joseph Eddy, vocation director of the Order of Mercy in the United States. “Every Christian, of course, must be willing to die for the faith if necessary, but our promise takes on the depth of a vow. And also, as part of our charism, we seek out captives of various kinds.”

Surely, it was the constant living of the fourth vow which reminded the Mercedarian friars that life is about the eternal rather than the temporal. Once that truth is internalized, it is only to be expected that great saints and martyrs would spring forth from the Order. One profound example is Luis de la Peña, considered a “Martyr for the Eucharist” in sixteenth-century Chile.

Father Luis devoted himself to the evangelization of the Araucanian Indians, and when he received word of an attack on his Order’s convent, he rushed to the church to prevent the invaders from committing sacrilege to the Eucharist. Rather than fleeing for his life, he consumed the Eucharist as natives rushed into the church, killing him immediately with their spears.

Death Rather Than Denial

During the more recent persecution of the Church in twentieth-century Spain, Mercedarians challenged the government in their pious work. As churches were being destroyed, Servants of God Mariano Alcala Perez and his eighteen companions denied the atheistic regime by preaching the salvation of Christ. When they were seized by the government for “offenses” such as saying the name “Jesus,” the priests were tortured and executed. When the time for their glorious martyrdom came, the priests remained steadfast and courageous, even under brutal torture.

As Christ gave his life up for us, the friars of the Order of Mercy are gladly disposed to lay down their own lives. “Through baptism,” Fr. Joseph states, “all the faithful are called to heroically live as priest, prophet, and king: spreading and defending the faith. The charism of the Mercedarian Order is recognized by the Church, and serves as a great witness as to the grace of God present among those he has called to imitate Himself.”