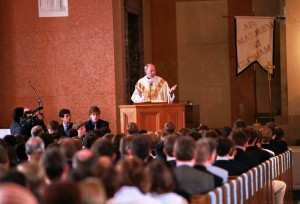 Whether the homilies of your priest (or deacons) are the pits, mediocre and boring, the best, or spiritually life-changing, preaching is a two-way street – speaker and listener – and you, the listener, can have dramatic and beneficial effects on the speaker, the priest, and on the quality of his preaching.  Some suggestions:

Imagine a Mass at which no one looks at the priest during the homily. At best, this would be annoying; at worst it could adversely affect the priest’s self confidence and his ability to reach and to spiritually lead his congregation.

For him it changed the homily from words cast out over an amorphous group to a personal message to a real person – and it made that message more personal and effective for everyone else in the church.

Imagine the effect if several people do this. Who knows – your paying attention could, perhaps, improve the homily for you.

After Mass, thank the priest for the homily, especially if something struck you as well said or as applying to you in your life. For a priest, there is nothing like being told that you heard what he said and that, for you, it had personal poignancy and meaning.  This implicitly tells him that he is doing his job of shepherding you and bringing you home to God.

Another way to convey to the priest that you listened and that he did a good job is to ask him a question you have based on something he said in his homily. Just about any serious question can achieve this, such as:

“You mentioned X and I never heard that before.  Is that part of church history?”

“Father, you said Z is church doctrine. Does that mean I have to believe it?”

“That quote you said about R, where is that from?”

“Father you talked about T. Where can I learn more about this?”

“You said M, but I just don’t get it. Could you explain that in simple words?

Odds are, no matter what question you ask, he will be impressed that you did so, and your question will tell him that you were paying attention and heard what he was saying. This is true whether or not, right there on the spot, he knows the answer to your question. Almost certainly he will tell you where you can find the answer or he will let you know he will check it out himself and get back to you.

Let other folks know what you are doing or just praise your priest to others. Tell them how last Sunday’s homily really spoke to you. How it has made you think. How you appreciated the message. Whether or not you let your priest in on what you are doing is up to your discretion. Most priests will be thankful, but some might be irritated – so before you spill the beans figure out who you are listening to and, in charity, hurt no one.

You can be God’s loving instrument for your priest, to paraphrase Ephesians 6:19, so that utterance may be given unto him, that he may open his mouth fearlessly, to make known the mystery of the gospel.