Trending Now
You are at:Home»Featured»For Mothers Everywhere: On Scrubbing Toilets and the Challenger Disaster
By Kathy Schiffer on February 3, 2012 Featured, Parenting 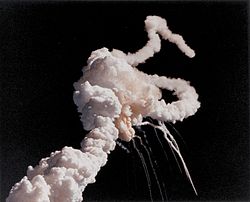 Twenty-six years ago, on January 28, 1986, the Space Shuttle Challenger broke apart 73 seconds into its flight,disintegrating over the Atlantic Ocean off the course of central Florida.  All seven of its crew were killed, including the “Teacher in Space,” Christa McAuliffe.

When the Challenger exploded, I had three young children at home.  To supplement our family income, I had taken a few neighbors’ children into our home, as well, providing after-school snacks and homework help for the children of working parents.

My life, it seemed at the time, revolved around cleaning toilets and changing diapers.  Oh, sure, I had made the choice to stay home to mother my children.  Together we read stories and baked cookies, sang the ABCs with gusto, embarked on sun-splashed walks in search of caterpillars and wildflowers.  But when would I ever have an opportunity to use my business education, my college degree, the skills for which I’d trained?

It was around that time that I met Dr. Sharon Newman Bordine.  Sharon, a science teacher here in Southeastern Michigan, had been selected as part of NASA’s “Teacher In Space” program.  She was a stand-in for Christa McAuliffe.  Had McAuliffe so much as caught a cold in the weeks leading up to the Challenger’s final flight, Sharon Bordine might well have replaced her on the ill-fated voyage.

But McAuliffe walked smiling and waving onto the Challenger that day.  As John Magee wrote in his poem “High Flight,” quoted by President Ronald Reagan after the disaster, she “slipped the surly bonds of earth…and touched the Face of God.”

And Dr. Sharon Bordine went on to serve as a NASA Space Ambassador, visiting high schools and science classes and generating enthusiasm for space exploration.  Sharon was a local celebrity, visiting the White House, appearing on television and radio to promote the space program.

But Sharon’s saga of privilege and adventure doesn’t end there.  Sharon told me about how she had met her husband, local nursery owner Bruce Bordine, at church, and how Bruce had proposed to her while they were on a church-sponsored pilgrimage, as they sailed on the Sea of Galilee.

The point/counterpoint was discouraging:

I was…. Well, I felt…. I thought….  Geez, I was jealous as hell!  I mean, I was hardly a world traveler:  I’d been on a few road trips across the United States, I’d crossed the Ambassador Bridge to Canada—but that’s about it.  Adventure?  I couldn’t imagine that in my plebeian, suburban life I would ever have a real adventure.

That was then, this is now.  The kids whom I loved half to death grew up and moved away; and what I wouldn’t give to have back those earnest little hands to wash, those breezy days of hugs and giggles and whispered secrets.

I’ve had some grand adventures.  I’ve flown across the ocean not once, but six times, and I plan to do it again.  I’ve met the Pope and kissed his ring.  When the time was right, I returned to the workforce.  I’ve had a satisfying career, a joy-filled marriage, and a home that’s comfortable if not extravagant.

It’s just too tempting, as you wipe smudged little faces and tackle yet another mountain of dirty dishes, to forget to thank God for those most precious of life’s blessings.  But today, if I could choose one day to live again, one poignant memory to forever hold up to the light, I’d rush to embrace those soft little bodies, begging for just one more goodnight kiss, one more silly song, one more question.

Being a mother is, after all, the greatest adventure of all.