Trending Now
You are at:Home»Featured»For My Name’s Sake
By John Kirkwood on November 17, 2014 Featured, Live in Christ 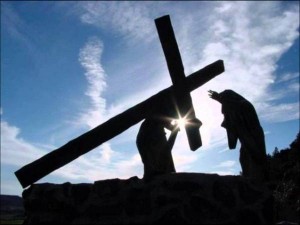 Take Up Your Cross

Jewish parents living in a hostile land will prepare their children from a very young age for the unfriendly treatment they are likely to endure. Our Christian brothers and sisters in places like Mosul and Egypt will do the same, but here in America we have never known nor often have we taught the cost of discipleship.

Our children simply aren’t prepared for the treatment that the world will afford the true disciple of Christ. Youth group is busy about pizza, scavenger hunts, and running around a circle and diving for a bean bag. Hardly a Spartan’s training for a future soldier of Christ. Upstairs, “adult” church is hardly better — pastors blowing sunshine in the thirsty ears of self-absorbed, illiterate Christians, anxious to learn the latest incantation that will bring God out of his genie bottle.

“I gave as an offering my all to Him who had won me and saved me. My property, my fame, my health, my very words… In considering all these things,” wrote Gregory of Nazianzus, “I preferred Christ. And the words of God were made sweet as honeycombs to me, and I cried after knowledge and lifted up my voice for wisdom. There was moreover the moderation of anger, the curbing of the tongue, the restraint of the eyes, the discipline of the belly, and the trampling under foot of the glory which clings to the earth.”

What a marked difference between the sentiment of Gregory and the “Eat the cookie, buy the shoes,” “Every day is a Friday,” and “Your best life now,” freeology of the modern church. One is occupied with a Savior and magnificent grace, the other with what Schaeffer called, “Personal Peace and Affluency.”

Soothsayers con sheeple into believing a new gospel: that Christ died to set you free from obesity, complacency, mediocrity, and insolvency. That indeed “Jesus Saves,” — saves you from loneliness, alienation, beer bellies, and remaining “broke, broke.” That which the Apostle called dung and less than loss in order to win Christ is now proffered by tele-charlatans who with feigned words make merchandise of us.

Modern Churchianity proclaims, “When Christ calls a man, he bids him come and dine,” reducing Bonhoeffer’s maxim on discipleship into nothing more than a Pampered Chef invitation. Is this the major contributing factor in the Barna research that has found 7 out of 10 evangelical children forsaking the faith after their first semester of college?

So, what do we tell our children to prepare them for the way?

As a Pastor I’m often asked, especially by young people, how to discern the will of God for their lives. Here’s part of my answer: God’s will is for you to be hated among men, to be seen as vile, a reproach, to be lied about, to be abused in every conceivable manner socially, emotionally, financially, and possibly even physically. And then God’s will for you is to not return the hatred, the lies, and the vitriol, but to lead with his heart, to offer an open hand, and if you must – to be willing to part with your head.

Does that fit into your Jesus-as-a-fortune-cookie relationship? Did you learn that in Sunday school or AWANA?

How do we prepare our children for the way and raise the next generation of faith heroes? Tell them the truth, the whole truth, and nothing but the truth. Let them ponder the words of the Apostles and those of Christ. Don’t avoid what was forewarned to be the world’s reaction to Godly men. And at the same time instill in them that we have this glorious privilege of bringing pleasure to God through it all.

George Shultz, Ronald Reagan’s Secretary of State, was famous for inviting Ambassadors who had just been appointed into his office before they deployed to their assignment and saying, “Show me where your country is on that globe?” Most would find it an insulting exercise in geography and roll their eyes. Only when the globe stopped and their index finger landed on Japan, Zaire, or Brazil did they find out it was actually a lesson in Duty, Honor, Country.

To their utter amazement, Shultz would frown, announce that their answer was wrong, and spin the globe until his index finger rested on these United States. “No, young man, this is your country,” and then he would exhort them to never forget that a U.S. Ambassador is the eyes, the ears, the hands, the feet, the very voice of our nation on foreign soil. While you may be an Ambassador to Japan, Zaire, or Brazil, you represent the United States of America. Never forget it!

We are Heaven’s ambassadors on loan to planet earth. We have a higher priority but that shouldn’t lead to less involvement or less interest in our natural citizenship. On the contrary, the Grace of God and the privilege to serve the King of Kings where we are is the highest service imaginable. But let us not take lightly how the world will react.

Do you think the American Ambassador to Germany, Japan, and Italy was showered with admiration and affection just prior to the break out of hostilities? No, the faithful Christian will be treated as Leonidas treated the Persian Ambassadors, after all, “This is Sparta!”

Speaking to a few dozen young Christian boys and girls who had just graduated the eighth grade, I assigned each child a descriptive from a list of Bible verses that describe discipleship.* I shared with them the warnings from Jesus and his Apostles that describe what the faithful would go through, how they’d be perceived, and what they would suffer; and then I asked them to remember the one word that I had assigned to them. At the end of the lesson, I asked them to stand and shout their particular word or phrase.

Til this very day, some of them tell me that they still remember their word. The truth is, as you see it play out around the globe, the faithful disciple will fulfill many of those words. Remember, God’s Honor Roll and Satan’s Radar are the same list. You won’t be on one without being on the other.

As Benjamin Franklin said, As to the abuses I meet with, I number them among my honors. One cannot behave so as to obtain the esteem of the wise and the good without drawing on oneself at the same time the envy and malice of the foolish and wicked, and the latter is testimony of the former. The best men have always had their share of this treatment, and the more of it in proportion to their different and greater degree of merit. A man, therefore, has some reason to be ashamed of himself when he meets with none of it.