Trending Now
You are at:Home»Featured»Fox News Raises the Rainbow Flag
By John Kirkwood on September 13, 2013 Featured, On Media, The Homosexual Agenda, The Social Order 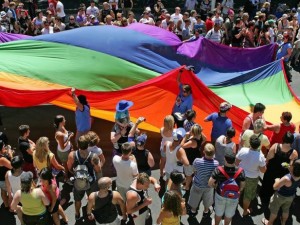 Bernie Goldberg pushes “Jesus is just alright with” gay, then implies that the Biblical heroes David and Jonathan were homosexual as were Ruth and Naomi. Sean Hannity? – Still mum.

Shep Smith graces the annual report of “Out” magazine’s 50 Most Powerful Homosexuals (he does have dreamy eyes), Fox News Channel fronts tens of thousands of dollars for a Gay and Lesbian Journalists group, and Chris Wallace probes Ron Paul’s homophobia. Stossel? He’s down with gay and thinks polygamy is just groovy.

Five out of five of “The Five” agree with the “evolved” Obama on same-sex marriage; Fox hires “out” lesbian, liberal Sally Kohn – and I think Hannity just blinked.

Do your eyes deceive you? This must be about MSNBC; Fox News is the conservative network, right?

The part that really kicked me in the pants was the Pew Research Study that confirmed that Fox News had a pro “gay marriage” bias and that even liberal NPR was more “Fair and Balanced” on the issue than was Fox.

“Conservatives of all stripes had high hopes for Fox News to offset the overwhelming liberal bias of the dominant “mainstream” media networks,” writes LaBarbera, president of Americans For Truth About Homosexuality (AFTAH; www.aftah.org), a Chicago-based organization dedicated to exposing and opposing the LGBT (Lesbian, Gay, Bisexual, Transgender) activist movement.

If LaBarbera is anything, he is fair as he is thorough! His report asks some critical questions:

– Is Sean Hannity afraid of the “gay issue”?

– Is Shepard Smith the next Anderson Cooper?

– Is Megyn Kelly the new hero to the gay lobby?

– Where is John Stossel, the champion of liberty, on the biggest threat to religious liberty in American history?

– Why is Fox News subsidizing a “gay” journalists association?

– Why does Fox humanize one side of the debate while marginalizing and demonizing the other?

– Why is Fox so averse to having a “fair and balanced” debate, with a real “pro-family” conservative as a counterpoint?

“But Fox, mimicking current trends in the Republican Party with which it is often identified,” LaBarbera continues, “– has increasingly adopted a libertarian brand of ‘conservatism’ that eschews or downplays social issues, especially homosexuality, as too ‘divisive.’ Thus Fox News’ coverage – including conservative advocacy programs like the ‘Sean Hannity Show’– has in recent years tended to downplay homosexual-related issues,” added LaBarbera. “(This is at odds with Ronald Reagan, who advocated social conservatism as one of the three legs of the conservative stool – the others being fiscal responsibility and a strong defense and foreign policy.)”

When a “news” organization decides what stories they will share and which to shelve, they are committing censorship by omission. In contrast to MSNBC’S more overt “in the bag” gayhem, the majority of Fox hosts just pretend the issue doesn’t exist.

Even in the broil of the same-sex “marriage” debate, Hannity rarely raised the issue and when it did come up, he looked like he was auditioning for the role of Chief Inspector Dreyfus in a Pink Panther remake: *Eye-twitch – “Let not your hearts be troubled,” followed by a butt shift and an uncomfortable segue to safer subjects, like treason or Benghazi, then throw the Nerf football to Camera #2. “It’s a wrap!”

Not only does Fox shy from the controversy, when the issue does come up, they stack the deck with a bevy of gay-pologists: Greg Gutfeld, Sally Kohn, Kimberly Guilfoyle, Liz Wiehl, for a time Margaret Hoover and Wayne Besen. All of these are pro gay with some even going as far as to castigate those with whom they disagree as hate-filled bigots.

When was the last time that you saw Peter LaBarbera or Matt Barber as a guest on the “fair and balanced” network? Even Tony Perkins is rarely invited since the whole flap with Megyn Kelly that produced the infamous remark from Ron Burgundy (Bill O’Reilly) about “bible thumpers.”

In fairness, the special report from America’s Survival does chronicle when Fox has been fair on the issue and gives credit to personalities like Gretchen Carlson, Todd Starnes and Mike Huckabee, who stand for traditional values, but how often are these exceptions ever on the air? How often are they on the air and speaking about this subject?

It seems that the Fox hierarchy has stowed the defenders of sexual purity in the closet while tossing the keys to sexual anarchy’s vanguard.

When was the last time that Fox News had an ex-gay on? Actually that may have been back in 2002 when Bill O’Reilly attacked Stephen Bennet for challenging his understanding of the Catholic position on homosexuality. Bennett, who overcame his “gay” lifestyle of 11 years (including over 100 homosexual partners), embraced Christianity, married his girlfriend Irene and became the father of two children, was called an “idiot” by O’Reilly on the radio show lead-up to the television interview (where O’Reilly toned it down to “religious fanatic”).

I’m pretty confident that anyone who actually believes that the Bible is God’s word would be considered a “religious fanatic,” coming from a guy who will shortly set us all straight about the real reason that Jesus was killed – “taxes!”

From Megyn Kelly’s rabid defense of all things lavender to Shep Smith’s comment on “Chick-fil-a” day being a “national day of intolerance”, Fox News seems to have taxied out on the good ship lollipop.