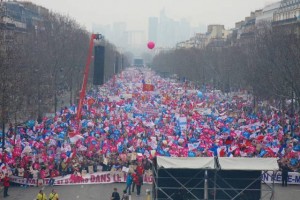 A pro-marriage rally in France in March.

The French National Assembly voted for the text legalizing same-sex “marriage” and adoption by 331 votes against 225 on Tuesday afternoon. The Socialists were joined by the Greens, the Communist party and the Radicals and other leftwing groups, but also by Centrists and two members of the opposition UMP (ex-president Sarkozy’s party), in adopting what Christiane Taubira, the French Justice minister, called a “change of civilization.” A handful of Socialists, Communists and Radicals voted against.

Seconds after voting most of the opposition members left the chamber while the majority of the Left gave a standing ovation to the law. Clapping in rhythm, they chanted: “Equality, equality!”

A few minutes before the vote, the Assembly’s socialist president, Claude Bartolone, had reacted angrily to a move by the public in the galleries, when two young men started to unfurl a white banner with the word “Referendum.” “Get those enemies of democracy out of here!” he shouted. “They have no right to be here!”

An ironic statement, considering that president François Hollande and his government have consistently refused to listen to the hundreds of thousands of people who have been protesting peacefully in the streets for months. Teargas and brutalities, police provocations and a growing tendency, in the government as well as in the mainstream media, to call all opponents “homophobic,” made the debate anything but democratic. 700,000 written petitions to the Economic, Social and Environmental Counsel, an official body which has consultative status alongside the Parliament, were simply ignored.

As to the Senate’s vote, which took place on April 12th by a simple show of hands in presence of some 50 senators (out of 348), there is evidence that it was manipulated. The presidents of the political groups present arranged for the virtual votes of the absentees to be published in the official Gazette and to be taken into consideration for the final count: socialists who were known to be opposed to the law were counted as having voted for it. Other points also remain obscure.

Yesterday evening, all the major towns in France and many small ones were preparing for demonstrations against same-sex “marriage.” Many will be followed by silent vigils by the “Watchers,” groups of peaceful youth who have been holding candlelight vigils in protest against the gay ‘marriage’ legislation.

The “Printemps français” movement, led by Beatrice Bourges, has announced that as of yesterday, it has chosen to enter into “dissidence against François Hollande’s régime.”

“When all legal means have been used and failed, nothing else is left but disobedience,” the movement said. “François Hollande will be remembered by history as the president who has provoked the most severe social crisis in France since the May 1968 revolution.” Printemps français is asking French citizens to wear a black ribbon from now on.

On Saturday, a gay “marriage” show, “G-Day” will be held in the center of Paris. Exclusive and trendy, it will cater for men only. Its organizer, Claire Jollain, is aiming to reach the gay community because of its members’ “high incomes and expensive tastes”.

LGBT groups have voiced their satisfaction about the adoption of the law and several demonstrations are in progress: they are already claiming access to artificial procreation techniques such as in vitro fertilization.

When the result of yesterday’s vote was announced, many church bells sounded the death knell.