Trending Now
You are at:Home»Featured»France: the Ugly Face of Gay-Fascism
By J.C. von Krempach, J.D. on June 22, 2013 Featured, International Issues, The Homosexual Agenda 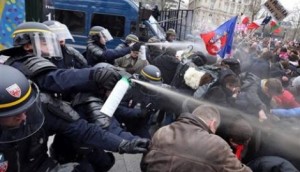 It is as foreseeable as it is unavoidable: a government that abuses its power to impose absurd and counter-natural laws such as on same-sex “marriages” will soon face massive protest. And given that such laws cannot be defended with rational arguments, those in power take recourse to violence and blatant human rights abuse.

Sadly, France is now in such a downward spiral. All those among us who believe in human rights and civil liberties should closely watch what is going on in this country, which once proudly thought of itself as the place where human rights originated, but which is now turning into something like a dictatorship in which gender-theory and homosexualist ideology hold sway, while human rights defenders are persecuted and the freedom of opinion is trampled upon.

There is now a first victim to deplore. His name is Nicolas, a 23 year old student from Angers, who was arrested while peacefully protesting against the absurd re-definition of marriage and family by his country’s government. He has now been sentenced to one month of imprisonment for “rebellion”.

This judgment apparently is intended as a clear message to all citizens that still dare to oppose the new gay-fascism: we are not going to listen to you, nor engage in any rational argument about the meaning of marriage and the family, but we will simply put you in jail. Dissident opinions will be silenced at all costs.

Meanwhile, disturbing video footage has emerged on the internet. It shows how policemen mingled among the peaceful crowd that protested peacefully in favour of marriage and family on 26 May. These “agents provocateurs” had the task of artificially provoking the violent “incidents” that Manuel Valls, the French Minister of the Interior, had “warned” against prior to the demonstration.

The use of “agents provocateurs” is a feature that is typically used by totalitarian regimes. It shows how far the gay lobby in Europe is prepared to go to push through its agenda.

If you want to write to President François Hollande to express your concern over the blatant disrespect for basic human rights in France, you can do it here:

(You can do this in English, because even if many Frenchmen pretend not to understand any foreign language, some of them do. By necessity, the President’s office, given that it is responsible for foreign relations, has some employees who can read letters in English.)