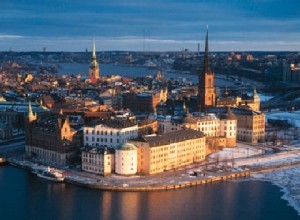 Two historic countries, moving in opposite — and unexpected — directions.

“Sweden” isn’t the first word that normally crosses our minds when we hear the expression “free market.” But if President Obama, Paul Krugman, Warren Buffett, and other progressives want to find ways out of America’s seemingly-intractable economic crisis, they might consider looking to the country once viewed as the very model of a modern Social Democracy.

They’re likely to be surprised — and probably appalled — by what they discover. For while America has opted for more deficit-spending, bailouts, socialized medicine, easy money, failed state-subsidized Solyndra-like green businesses, “job-plans,” and thus-far unsuccessful efforts to raise taxes, Sweden has been quietly turning social democracy into a museum-piece.

No one will be surprised to learn that Sweden was among the first European countries to create a modern welfare state. Between 1911 and 1914, Karl Staaff’s Liberal government introduced some of Europe’s first national pension and insurance schemes. Over time, additional programs were added.

But two things distinguished Sweden’s welfare state from the very beginning. First, Sweden’s progressives cleverly marketed their ideas as a way of realizing what they called a folkhemmet (people’s home). The emphasis was upon realizing a once-overwhelmingly peasant society’s traditional values in a context of industrialization. This helped the Social Democrat governments that ruled Sweden between 1932 and 1976 avoid being labeled as soft-Marxists in a country deeply wary of an expansionist Soviet Union.

The second distinguishing feature was Sweden’s vision of state-provided social protection as a right. This led to successive governments insisting upon universal coverage and the costs being covered by general taxation.

It took several decades, but the relentless logic of these commitments eventually eroded the Swedish economy’s competitiveness. The situation was worsened by the decision of governments in the 1970s to hasten Sweden’s long march towards the Social Democratic nirvana. This included expanding welfare programs, nationalizing many industries, expanding and deepening regulation, and — of course — increasing taxation to punitive levels to pay for it all.

Over the next twenty years, the Swedish dream turned decidedly nightmarish. The Swedish parliamentarian Johnny Munkhammar points out that “In 1970, Sweden had the world’s fourth-highest GDP per capita. By 1990, it had fallen 13 positions. In those 20 years, real wages in Sweden increased by only one percentage point.” So much for helping “the workers.”

These reforms, however, proved insufficient. In the early 2000s, according to James Bartholomew, author of the best-selling The Welfare State We’re In (2006), more than one in five Swedes of working-age was receiving some type of benefit. Over 20 percent of the same demographic of Swedes was effectively working “off-the-books” or less than they preferred. Sweden’s tax structure even made it financially advantageous for many to stay on the dole instead of getting a job.

But with a non-Social Democrat coalition government’s election in 2006, Sweden’s reform agenda resumed. On the revenue side, property taxes were scaled back. Income-tax credits allowing larger numbers of middle and lower-income people to keep more of their incomes were introduced.

To be fair, the path to tax reform was paved here by the Social Democrats. In 2005, they simply abolished — yes, that’s right, abolished — inheritance taxes.

But liberalization wasn’t limited to taxation. Sweden’s new government accelerated privatizations of once-state owned businesses. It also permitted private providers to enter the healthcare market, thereby introducing competition into what had been one of the world’s most socialized medical systems. Industries such as taxis and trains were deregulated. State education and electricity monopolies were ended by the introduction of private competition. Even Swedish agricultural prices are now determined by the market. Finally, unemployment benefits were reformed so that the longer most people stayed on benefits, the less they received.

So what were the effects of all these changes? The story is to be found in the numbers. Unemployment levels fell dramatically from the 10 percent figure of the mid-1990s. Budget-wise, Sweden started running surpluses instead of deficits. The country’s gross public debt declined from a 1994 figure of 78 percent to 35 percent in 2010. Sweden also weathered the Great Recession far better than most other EU states. Sweden’s 2010 growth-rate was 5.5 percent. By comparison, America’s was 2.7 percent.

Of course Sweden’s story is far from perfect. Approximately, one-third of working Swedes today are civil servants. Some of the benefits of tax reform have been blunted by Sweden’s embrace of carbon taxes since the early 1990s. That partly reflects the extent to which many Swedes are in thrall to contemporary Western Europe’s fastest growing religion — environmentalism.

High unemployment also persists among immigrants and young Swedes (25.9 percent amongst 15-25 year olds). This owes much, Bartholomew observes, to “the high minimum wage imposed on the various industries by the still-powerful unions. Those who cannot command a good wage are not allowed to work for a lower one.” On the income side, average Swedish wage-earners in 2009 still took home less than 50 percent of what they cost their employer. The equivalent figure for Britain was 67 percent.

It hardly need be said that the differences between Sweden and the United States are enormous. An economy of 310 million people is a very different affair to one with just over 9 million inhabitants. Moreover, small ships are easier to turn around than ocean-liners. Nonetheless, it’s surely paradoxical — and tragic — that a small Nordic country which remains a byword for its (at times obsessive) commitment to egalitarianism has proved far more willing than America to give economic liberty a chance.