Trending Now
You are at:Home»Columnists»Freedom! Finally!
By Marge Fenelon on January 25, 2012 Columnists, Featured, Live in Christ 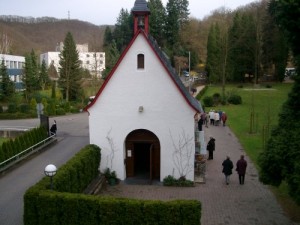 Today was the funeral of a dear family friend and my mentor of many years. I couldn’t attend Fr. Jonathan’s funeral, because it was held in Germany where he’s been stationed since 2009. He’s buried there, too, in his community’s cemetery near their Schoenstatt Fathers house and world headquarters.

During the hours of the funeral and burial, I held a private holy hour at one of the Schoenstatt Marian Shrines in my area. The shrine is my absolute favorite place on earth. This one in particular is special to me, since I belonged to the parish and attended the Catholic grade school that’s part of the same property as the shrine. This shrine and I were “born” a year apart, so you might say we’ve grown up together. In the company of our Blessed Mother and her Son, it was the perfect place to allow my grief to unravel and to unite spiritually with others throughout the world who also are grieving the loss of Fr. Jonathan.

Once I’d emptied myself out, I quickly scanned the table of contents of my prayer book and randomly chose one that looked uplifting. It was a prayer of thanksgiving, and I offered it in gratitude for Fr. Jonathan’s life. Then I packed up my gear (books, rosary, journal, tissues…) for the trip home. As I reached for the light switch, the school’s recess bell rang.

“Ha, Blessed Mother. Looks like you’re letting me out for recess now,” I smiled.

I stepped outside and closed the door behind me. Suddenly, a boy of about eight years old went flying past me, a hundred paces ahead of his school mates. His arms were reaching up to the heavens and his face was complete joy.
“FREEDOM! Finally!” he screamed as he raced across the playground. This little guy must have been counting the seconds until his release from the chains of the classroom.

I couldn’t help but chuckle. “Yep. There goes Fr. Jonathan,” I muttered to myself. “Freedom. Finally, he has freedom.”

I could feel that little boy’s joy, and it sparked some of my own. I could imagine the soul of this holy priest who had suffered with cancer for months before his passing. Now he is free of that suffering; he’s been released of his chains. Like the little boy on the playground, Fr. Jonathan can race, arms outstretched, face beaming with joy, and screaming, “Freedom! Finally!”

As I climbed into our mini-van, I had one of those tiny mental-emotional twitches that signals a connection’s been made that you didn’t make yourself, like somebody tapping you on the shoulder and pointing to the paper clip you’ve just spent 20 minutes searching for. The prayer I had randomly chosen in the shrine came from the book Heavenwards, a collection of prayers written by Schoenstatt’s founder, Servant of God Fr. Joseph Kentenich while he was interned in the Dachau Concentration camp from 1941-1945. His cause for beatification has been opened in Rome.

Fr. Jonathan had translated Heavenwards from it’s original German into English. Here’s the prayer I chose:

Hymn of Thanksgiving
The chains have fallen! Let a song of thanksgiving jubilantly resound to heaven from all within Schoenstatt’s holy halls.
On our difficult pilgrimage, God, to his glory and praise, has revealed to our circle his greatness and wisdom.
The misfortunes which Satan devised in his might and treachery were transformed by the Father’s glance into our greatest fortune.
Whatever was too earthbound in our thinking and too human in our giving of self God desired to direct upwards and anchor entirely in himself.
We therefore stand united today, formed by God’s love, fearless in the struggle with all of Satan’s offspring,
so that new men and women arise who are, like Christ, both free and firm on earth, in joy and in sorrow,
interweaving with him alone the striving of their hearts, just as his Mother-Bride did while on earth.
In thanksgiving let our souls choose the Lamb of God, espousing ourselves to him eternally and being counted among his faithful.
Lord, is the destruction we so suddenly face a sign that you want to die again? Are the tokens of your love a search for heirs of your transfiguration?
See here the ones who are your own! The small! The pure! Graciously united them to yourself, revealing yourself to the world anew.
In them you may suffer, go to battle, care for souls. Through them you prepare for yourself again the joys of the resurrection.
Through them build the city of heavenly meadows so that all people can look up to it full of confidence.
You may send them forth to the very ends of the earth. They pledge themselves to you today to complete your kingdom on earth.
Mary, take this offering into your faithful, motherly hands so that until our final breath this song of thanksgiving may never end. Amen.

This prayer, written in the throes of degradation and deprivation was filled with hope! I thought of Fr. Jonathan. Now he’s not only released from his suffering, but also from all the human limitations with which he struggled during his life. What’s more, he can help those on earth in ways he was never able to before. Like the Little Flower, he can spend his “heaven doing good on earth.”

It’s necessary and healing to grieve the loss of those we love, but we can’t get stuck in that earthbound thinking. When a loved one dies, it’s difficult to see that even the worst calamity can be transformed by the heavenly Father into our greatest fortune. Perhaps we know it in our heads, but it’s another thing to feel it in our hearts. If we’re open to it, that greatest fortune can unfold in untold ways. Miracles aren’t only about multiplying loves and fishes. They’re also about the multiplication of God’s grace within us and the impact that will have on the entire world.

Fr. Jonathan has become an heir of Christ’s transfiguration in a real way. I can only hope the same for myself and for the rest of my loved ones.

Like Fr. Jonathan’s, may our final breath be a song of thanksgiving that never ends.