Trending Now
You are at:Home»Featured»From Father to Son in After Earth
By Marc T. Newman, Ph.D. on June 4, 2013 Featured, Men, On TV and Movies, Parenting 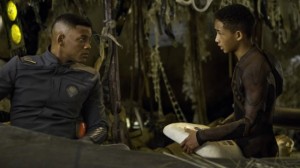 Will and Jaden Smith in After Earth

Being marooned, either on a desert island or in space, has a long literary and film history. There is something about the solitary individual (sometimes the small group) battling against his circumstances, knowing that no cavalry is going to arrive. When the stakes are “perform or die” you normally have captivating drama.

The pairing of real-life son and father Jaden and Will Smith in this summer’s sci-fi film After Earth plays on the marooned theme. The movie also attempts to communicate an environmentalist take on what the Earth might look like if the “human cancer” was excised for an extended period of time – in the future we live on a distant outpost. But the overwhelming focus of the film really is that of a father teaching his son what it takes to be a man. None of it involves chasing girls – and for that, we can be thankful.

The key lesson in After Earth is overcoming fear so that a man can complete his mission. Overcoming fear requires recognition, training, and engaging the will.

The chief adversaries of humans (other than themselves – we did manage to wreck an entire planet through a montage of war, industrial development, and anthropogenic climate change) are the Ursas – blind, exceptionally violent creatures that home in on human fear pheromones with a sense of smell that surpasses the effectiveness of bat sonar. The key to survival is to master your fear. Courage makes the soldier imperceptible to the Ursa. The ability to act without fear is called “ghosting.”

Young Kitai Raige has a lot of good reasons to feel fear. He has a stern, unyielding general for a father, and Kitai never can quite measure up. A tragedy in Kitai’s childhood has left an indelible mark on his psyche, and until he can find a way to overcome it, he will always be at risk.

General Cypher Raige explains to his son that while danger is real, fear is a choice. There is little you can do about perilous circumstances, but you can choose how you will respond to them. Understanding the nature of fear is the first step in conquering it.

In the scriptures, fear also is identified as a debilitating condition (Proverbs 28:1). It paralyzes people into inaction, and can be fatally contagious (Deuteronomy 20:8), and can transform into cowardice – causing some to run away, even when no one is pursuing them (29:25). It becomes a kind of wickedness, when you do not do what you should do because you fear for yourself.

But Kitai is not left to his own devices. Kitai longs to follow in his father’s footsteps and become a Ranger – warriors who protect the remaining human population. He enrolls in the academy, works hard, determined to distinguish himself from other cadets, but the scars of his past keep him from succeeding in the field. When he and his father crash-land back on a long-abandoned Earth, and the Ursa they were carrying in their cargo hold escapes, Kitai is in for a condensed course in fear wrangling.

The beauty of these scenes of struggle comes from the interaction of father and son. Dad understands that this is no training exercise. A single significant failure and their mission – and they – are doomed. Over and over again, Cypher reinforces instruction (lessons likely already engrained into Kitai’s memory from years of repetition). Kitai follows direction. The older man leads the younger man in the way he should go.

It is encouraging to see a father in film portrayed as a strong, capable leader. That’s not to say that Cypher is perfect; he does have his own issues concerning his profession and its overriding effect on his paternal role. But after a plethora of films where men are morons, this depiction was welcome. Cypher’s ability to instruct Kitai has limitations, however, and eventually Kitai must face his moment of truth alone.

Because of circumstances better left unrevealed, father and son lose contact with one another. Cypher can see Kitai, but Kitai cannot see or hear Cypher. There can be no more instruction. Either Kitai will let his training take over and guide his actions, or all is lost. Can Kitai engage his will to do what he knows to be right even in the face of daunting, frightening circumstances? That is the question the film answers.

In the life of every child, there comes a day when they leave their mother and father and strike out on their own. The Bible explains that parents should “Train up a child in the way he should go, even when he is old he will not depart from it” (Proverbs 22:6). This is a general principle, of course, not a scientific recipe for perfect children. The idea presented is that if parents will ground their children in sound principles, even if they should stray a little, eventually good training will kick in, the more mature child will see the wisdom of the course explained by the parent, and the child will cling to it. The important lesson is that parents must instill the right way in a child, otherwise when they grow up and face problems, they will have nothing to fall back upon. After Earth is about a father properly equipping his child, and the experiencing the anxiety of all parents as he helplessly watches and waits to see if the instruction “took.”

After Earth isn’t a great film. One is tempted to think of it as a very expensive family project. Will Smith is an established actor. His son Jaden is just starting out, and there is a lot of room for growth. But if you strip away the familiar sci-fi conventions and the middling CGI effects, the story that remains is a worthy one. Fathers and sons should consider seeing the film together, and then having a long talk afterward about what it takes to become a man and what makes a mission worth pursuing.