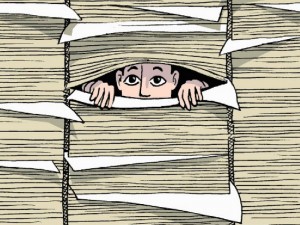 “There is no more neutrality in the world,” said Black Panther leader Eldridge Cleaver. “You either have to be part of the solution, or you’re going to be part of the problem — there ain’t no more middle ground.”

We live in Eldridge Cleaver’s world now. A world with no more middle ground. Where neutrality is not an option.

The average American still believes that if he isn’t bothering anyone, he should be left alone. To the people running his life and his country, that is as bizarre and unworkable as Phrenology  or handing out universal health care without also compelling everyone to buy it.

It takes a lot of money to be left alone.

Regulatory space is much more expensive than physical space, and buying it requires investing in lobbyists, fundraisers, and lawyers. If you make the right payoffs, then you can buy the privilege of being left alone, exempted from regulations, left uninspected, and protected against the agents of the state. Once you do that, you have bought yourself the privilege of not being considered the problem; becoming part of the solution for the people you are paying off.

The Americans ambushed by ObamaCare, the scam artist’s dream of a tax paid to a third-party in exchange for benefits accrued to a fourth party, still thought they had the freedom to despise the meddling politicians in both parties and ignore most things the government did, while living their own lives. They had seen their lives bedeviled by a thousand regulations, but still thought it was possible to hold the middle and reject all the solutions by asserting that they were not the problem.

They did not understand that in Cleaverland, in Alinskytown, and in Obamaville, no one opts out. Either you volunteer or you get drafted. Raise your hand or you will be called on anyway. Not volunteering to be part of their agenda means that you are the problem.

You, sitting right there in your chair, watching these words move across your screen, are the problem. A problem 311,591,917 human souls strong.

You eat too much or you don’t pay enough taxes, you drive your car too often, you haven’t bought solar panels for your roof, you browse extremist websites when you should be browsing government informational sites for tips on how to do or not do all of the above. Most of all, you don’t understand what a great problem you are for the people running this country into the ground between the Atlantic and the Pacific.

They keep trying to solve you, but you don’t go away.

We confront the Great Solvers of the Human Problem who are determined to rearrange everyone to their liking. They began by controlling everything that people did. Now, they have moved on to controlling what people don’t do. If you live, if you breathe, if you stir, move your muscles, track moving objects with your eyes, then there are obligations imposed on you.

ObamaCare is one of the final declarations that there is no opting out. Even if you don’t drive, own a home, own a business, own a dog, or do one of the infinite things that bring you into mandatory contact with the apparatus of your government, you are committed to a task from maturity to death. Your mission is to obtain health insurance, and, in a system in which you become the ward of the government as soon as you taste air, it is the price that you pay for being alive.

In a free country, you are not obligated to do things simply for the privilege of breathing oxygen north of the Rio Grande and south of Niagara Falls.

But this isn’t a free country anymore; this is a country in which you get things for free. And there is a big difference between those two things.

We are a nation in which everyone is entitled to everything, except the right to opt out of all the entitlements and the cost of paying for them.

We may not have the Bill of Rights anymore, but we have a hell of a bill to settle and, every year, the deficits keep making it bigger and bigger.

Our forefathers passed on to us a Bill of Rights, and we shall pass on to our descendants a Bill. A tremendous Bill which can be unrolled from the mountains to the prairies to the oceans white with foam… and all the way across the ocean to China.

Even if we could reach into our pockets and settle the bill with a couple of loose trillion dollar bills, this Bill doesn’t just demand money, it demands power.

If all that government officials did was go to Vegas, give each other prizes and sing silly songs, then the Bill would be large, but it wouldn’t ask for a piece of our soul. But the amount of money that the government spends is almost beside the point. The amount may bankrupt us, it may destroy our economy, it may turn us into debt slaves — but it’s secondary to how the money is being used.

It’s bad enough to be eaten out of house and home — worse to be forced to feed the occupying army that is taking away your freedoms one by one.

People often talk about the First and Second Amendments, the Fifth comes up, and even the Fourth. But how often do we think about the Third Amendment, that old relic of a time when we were ruled by a distant power with no concern for our lives or our freedoms? “No Soldier shall, in time of peace be quartered in any house, without the consent of the Owner“. It’s one of the few amendments that goes unnoticed. No one challenges it. No Supreme Court blots it out with the stroke of a pen or rephrases it to mean that there is a Constitutional right to abortion or a ban on executing juveniles.

There is no occupying army quartered in our homes. They have sizable barracks with marble floors, gleaming chandeliers, and metal detectors through which you must pass in order to meet with even one of their lowest officers. They aren’t quartered in your living room, they build buildings and send the bill to you. And then they send you another bill which informs you that they have decided that the War on Obesity, the War on Health Care, or the War on the Economy requires you to do a set number of things, the costs of both the doing and their enforcement to be borne by you.

In the last century, the Great Solvers went to work on a national and global game of human chess. They called this game by various names, The New Deal, the New Frontier, Hope and Change, or, most commonly, Social Justice. The real name of the game is “There Ain’t No More Middle Ground”. Either you are a New Dealer, a New Frontierer, a Hope and Changer, a Tolerator, a Liberal, a Donor, an Activist and an Organizer — or you are on the wrong side.

You might think that you are standing in the great moderate middle, the open-minded frontier of the old America, but the frontier and ground are gone. There is only Problemtown and Solutionville, and the bulldozers are coming to knock down Problemtown and deport its residents to Solutionville.

ObamaCare is the bus to Solutionville. It is the problem that is “You” being solved in the same inept brute-force fashion in which the Great Solvers solve everything, from Russian agriculture to European Union democracy.

The problems are many, and the Solvers are impatient. There are too many peasants, and weekends are too short, the golf courses are too crowded, and the numbers never add up. Each problem keeps needing to be solved many times, but they have already moved on to the next problem and the one after that in the great mass of problems that some people still call America.

Too many Americans still wonder out loud what happened. When did this stop being a free country? Then they finish pumping their gas, buy their sodas, paying several taxes on each, and completing a transaction for two commodities whose production and distribution involve more laws than the entire legal codes of Rome and Greece combined, and then drive home, where they begin making notes for next year’s taxes, while reading how the latest laws will affect them.

On the television, an anchor with carefully molded hair and the grave look of the career idiot who has learned to disguise this by always appearing concerned about something, interviews an activist who is proposing new regulations as the only responsible thing to do. “If you aren’t part of the solution,” she says with equally grave sincerity, “then you are part of the problem.”

The American nods along because the proposal seems so reasonable. Who doesn’t want to do something for the children, the oceans, the endangered red-banded shrub, the people somewhere who don’t have something, and that sincere young woman who really seems passionate in a way that few are anymore. Then he turns back to his desk, somewhere in the great middle ground that once was, studies the tax forms again and wonders when this stopped being a free country.