Trending Now
You are at:Home»Columnists»Gaining Solomon’s Gift for our Children
By Marge Fenelon on August 4, 2011 Columnists, Featured, Parenting 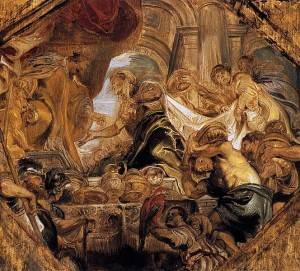 What if our children could be given the gift that Solomon received?

During his audience with those gathered at the papal summer residence in Castel Gondolfo recently, Pope Benedict XVI spoke in reference first Mass reading of Sunday July 24, which described Solomon’s request to God for a “docile heart” so that he would know how to render justice and know good from evil. The Holy Father explained that having a docile heart means having a “conscience that knows how to listen, which is sensitive to the voice of truth, and because of this it is able to discern good from evil.” This gift, he says, is necessary for Solomon to lead his people rightly; it’s also necessary for us as we live the royal priesthood to which we are called by Baptism. The Catechism of the Catholic Church tells us that, as the people of God, we are “a chosen race, a royal priesthood, a holy nation.” Solomon was a king, and therefore needed a docile heart. We, too, are royalty and therefore also need docile hearts.

Here are his Holiness’ comments:

Today in the Liturgy, the Old Testament reading presents to us the figure of King Solomon, son and successor of David. He is presented to us at the beginning of his reign, when he was still very young. Solomon inherited a demanding task and the responsibility that weighed on him was great for a young sovereign. The first thing that he did was offer a solemn sacrifice to God –- “1,000 holocausts,” the Bible says. Then the Lord appeared to him in a vision at night and promised him to grant him what he asked for in prayer. And here we see the greatness of Solomon’s soul: he did not ask for a long life, nor riches, nor the elimination of his enemies; instead he said to the Lord: ‘Grant a docile heart to your servant that he might know how to render justice to his people and know how to distinguish good from evil’ (1 Kings 3:9). And the Lord heard him, so that Solomon became celebrated in all the world for his wisdom and his just judgments.

Solomon asked God for ‘a docile heart.’ What does this expression mean? We know that in the Bible the ‘heart’ does not only mean a part of the body, but the center of the person, the seat of his intentions and his judgments. We might say that it is the conscience. ‘Docile heart’ therefore means a conscience that knows how to listen, which is sensitive to the voice of truth, and because of this it is able to discern good from evil. In the case of Solomon, the request is guided by the responsibility of leading a nation, Israel, the people through whom God had chosen to manifest his plan of salvation to the world. For this reason the king of Israel must seek to be in harmony with God, listening to his Word, to lead his people in the ways of the Lord, the ways of justice and peace.

But Solomon’s example is valid for every man. Each of us has a conscience to be in a certain sense ‘king,’ that is, to exercise the great human dignity of acting according to a properly formed conscience, doing good and avoiding evil. Moral conscience presupposes the capacity to hear the voice of truth, to be docile to its instructions. Persons who are called to the office of ruling of course have a further responsibility, and therefore — as Solomon says — have even more need of God. But each person has his own part to perform in the concrete situation in which he finds himself. An erroneous mentality suggests that we ask God for nice things and privileged situations; in fact, the true quality of our life and social existence depends on each person’s properly formed conscience, on the capacity of each and every person to recognize the good, separating it from evil, and to attempt patiently to realize it.

So, let us ask for the help of the Virgin Mary, Seat of Wisdom. Her ‘heart’ is perfectly ‘docile’ to the Lord’s will. Although she is a humble and simple person, Mary is a queen in the eyes of God, and as such we venerate her. May the Holy Virgin help us also to form, with God’s grace, a conscience always open to the truth and sensitive to justice, to serve the Kingdom of God.”

Having a well-formed conscience is vital to the growth and well being of every human being, every family and subsequently to all of society. Developing such a conscience and sense of righteousness begins in infancy, as children begin to see themselves as an “I,” and continues as they relate to the world around them, observing and perceiving the world’s response to their actions and reactions.

It’s up to us — as parents, guardians, teachers, and mentors — to help our children become like Solomon, know what to do, when to do it, and why it’s to be done that way. That takes practice and perseverance, providing guidance through natural consequences and Christian reasoning and the freedom they need to form their own judgments. Above all, it requires God’s grace, obtained through our prayers and sacrifices, offered in sincerity for the sake of our children.