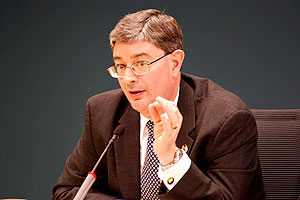 Even if you don’t agree with him, you have to admire George Weigel’s moxie.

It can’t be easy serving as the spokesperson for a “conservative” Catholic movement that labors so mightily against the preponderance of evidence to reconcile every last scintilla of conciliar innovation with the Faith handed down from the Apostles. Yet, he does it anyway.

Painting a quasi-messianic portrait of the late American born Jesuit theologian, Weigel batters Catholic sensibilities right out of the gate when he states, “It took the Church the better part of the late 19th and early 20th centuries to develop a robust Catholic concept of religious freedom;” the unmistakable implication being that the poor dimwitted Roman Pontiffs who had the great misfortune of having to rule without the benefit of Murray’s insight (a number of whom are Saints) were simply mistaken.

Weigel praises Murray’s “intellectual virtuosity” in convincing the Second Vatican Council to supplant the Church’s traditional doctrine with “a new Catholic understanding of the modern state” modeled after the First Amendment of the U.S. Constitution.

At this, a bullet point sketch of these two vastly different approaches may be helpful, beginning with the traditional teaching which states:

The novelties put forth by Murray (and adopted at Vatican II) by contrast state:

According to Weigel, one of the greatest challenges Murray faced in swaying the Council Fathers was addressing their fear that his decidedly American approach “would inevitably lead to religious indifferentism, and perhaps even to hostility to religious conviction.”

Hello? Isn’t this precisely what happened? With Catholic life in 2012 being what it is, Weigel is forced to point to the century leading up to Vatican II as evidence that the Council Fathers’ fears were unfounded.

Back then, in the United States (whose Constitution has a non-establishment clause) the Church was at peace with the government and Catholicism was thriving. By contrast, in more traditional Europe (where the Catholic State was possible) the Church was often at odds with the ruling authorities and was struggling to hold Her own.

Weigel wants us to join him in assuming (as the Council ultimately did at Murray’s urging) that there must be a cause-and-effect relationship between the American version of religious freedom and the Church’s ability to carry out Her mission and grow, (a proposition very closely related to the “Americanist” ideal rejected by Pope Leo XIII in the Apostolic Letter, Testem Benevolentiae Nostrae in 1899).

I would like to propose a different explanation; one curiously lurking right beneath Weigel’s nose.

In addition to Murray’s “exegesis of Leo XIII” (the theological shortcomings of which I’ve examined at some length here, here, and here), Weigel tells us that the matter was settled for most of the Council Fathers thanks to the allure of the “European personalist philosophy;” defined by the Stanford Encyclopedia of Philosophy as “proposing the human person as the new irreducible key to thought, especially regarding social organization.”

It was this over-glorification of man — a cancer that had infected much of Europe but had not yet fully invaded the American culture prior to the 1960’s — that accounts for the observable disparity in the Church’s relative health in these places during the  19th and 20th centuries.

The Church’s influence with the rulers of State in traditional European nations made that part of the world ground zero for the personalist movement. So while the sacred Magisterium was preaching Almighty God, through Jesus Christ, as the goal and highest ordering principal of both society and State, the secular humanists in Europe were busy making war on the culture (which by extension also meant directly combatting the Catholic Church). It was in this environment, not surprisingly, that the Church struggled.

In the United States, however, where the State is officially disinterested in evaluating religious truth but rather views all expressions of faith as equals under the law, no such direct assault on the Catholic Church was necessary. Why? Simply put, goal number one on the liberal to-do list was constitutionally prearranged; namely, instituting a form of governance that is disinclined to acknowledge the existence of absolute religious truth. It was in this atmosphere — one in which the commandants of the liberal regime were pleased to operate more subversively than they were in Europe — that the Catholic Church was able to thrive.

Make no mistake, however, Catholicism wouldn’t have fared nearly as well as it did in the century prior to Vatican II in the United States had the sacred hierarchy behaved then as it does today; the majority so paralyzed by ecumenical sensitivity that very few even bother to proclaim the Kingship of Christ and the Holy Roman Catholic Church as the universal sacrament of salvation and the custodian of objective religious truth.

Back then, the Church wasn’t afraid to preach her doctrines; like them or not, everyone with an interest knew what the Church professed, most especially Catholics! Catholic identity was distinct and it was noteworthy. We had our own festivals, our own disciplines, our own rituals and our own language. We even had our own primetime television star in Bishop Fulton Sheen!

And then it happened; the perfect storm.

The Council ratified Murray’s version of religious liberty shortly after the liberal culture warriors came blazing out of the shadows to unleash all out Hell on America. In essence, the Church had voluntarily adopted the language of mealy-mouthed legislators who speak as though Christ the King has no more rights than Buddha, and this at precisely that moment in history when the world needed Apostolic clarity the most.

In charity, one can perhaps understand how the “signs of the times” were so grossly misinterpreted in the halcyon days during which the Council met. Deficient though they were theologically, Murray’s idea’s appeared to make practical sense to many at that time based on the Church’s success in the United States.

That said, it’s high time at this point to admit that subsequent events have demonstrated the enduring wisdom of the traditional teaching.

Look, I’m as American as anyone, but unlike JFK, I’m Catholic first. As such, I’m not the least bit hesitant to say that the U.S. Constitutional approach to religious liberty is fatally flawed. In a nutshell, it attempts to sustain the unsustainable by avoiding the existence of absolute religious truth in a world that is ultimately ruled by Jesus Christ who is Truth incarnate.

A couple of days before the Respect for Rights of Conscience Act went to a vote in the U.S. Senate, Senator Barbara Mikulski (a liberal Democrat pretending to be a Catholic) inadvertently drove this point home when she decried what she viewed as the dangers associated with allowing employers the freedom to offer only those health insurance plans that don’t violate “their religious beliefs or moral convictions.”

Sarcasm aside, these are actually important questions, the Catholic answer to which (the only correct one) isn’t getting very much play these days, neither within the Church nor without.

For personalists like Mikulski, however, the answer goes without saying: In a country where every individual religious belief is as valid as the next, irrespective of its relationship to the absolute truth that comes to us from God, a bona fide “moral conviction” is whatever the Hell the ruling party says it is.

So now here we are, Catholic citizens of a nation that is quickly descending into the abyss of State imposed immorality, looking for leadership from churchmen who have effectively disarmed themselves of the only weapon that can possibly protect us; the sword of truth wielded in defense of the Sovereign rights of Christ the King.

And this, according to George Weigel, is a noble heritage of which to be proud.

Like I said, you have to admire his moxie.