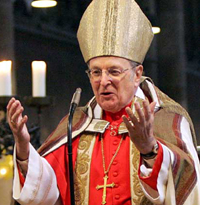 A drama has been unfolding in Germany over the last month that has seen the leading conservative prelate in the country, Cologne’s Cardinal Joachim Meisner, seem to suggest that it is permissible in Catholic hospitals to administer the morning-after pill (MAP) to rape victims. The Bishops of Germany will be discussing the matter further at their next plenary meeting later this month.

The story begins with a hard case which was trumpeted with selective facts in the media, manipulating sentiments and causing a national uproar. Headlines which exploded across the country and internationally read “Rape victim turned away by Catholic hospitals.”

After a party, a young woman found herself on a park bench wondering how she got there. The use of a date rape drug was suspected, so the 25-year-old went to an emergency clinic and was prescribed the MAP. Since rape was suspected, she was sent to hospital for a gynecological examination and in the process two Catholic hospitals refused, referring her to alternative hospitals.

But leaving the story there without further explanation, as the mainstream media did, painted a false picture resulting in public outrage.

Sophia Kuby of European Dignity Watch revealed the full story. Catholic hospitals refer her elsewhere, because the Health Ministry insisted that those hospitals offering treatment for rape must provide the abortifacient MAP. Knowing that hospitals that administer MAP must perform their own exams, Catholic hospitals would rather spare already traumatized women from having to have multiple invasive exams. Thus, referring them to hospitals which would comply with the state mandate to offer abortifacient drugs was necessary.

The national outcry against the Church, which came thanks to misleading media reports, prompted multiple press releases from Cardinal Meisner and also other bishops in the country.

A January 22 release had the Cardinal apologizing, noting that Catholics were “deeply ashamed” and that the turning away of the rape victim should never have happened. He said Catholic hospitals should indeed offer care to rape victims, including the needed gynecological exams.

He added, however, that they could not cause the abortion of an already conceived child. He said he understood that such a stance is difficult to accept in the face of such difficult circumstances but that protection of human life is an absolute.

A second release from the Cardinal which seemed to give approval for Catholic hospitals to use MAPs for rape victims came after the Cardinal received misleading scientific advice. The Cardinal said he was informed that new research suggests conclusively that the method of action of MAP is not abortifacient – that it does not cause the already conceived embryo to be unable to implant in the uterus (a post-fertilization effect).

However, the study he was presented with, was anything but objective. It was authored by a physician advisor to a pharmaceutical company that manufactures MAPs, as the author admits at the end of the paper. A physician who reviewed the paper for LifeSiteNews.com noted that, the review of the research focuses mainly on those studies which found no evidence for post-fertilization effects.

Adding to the confusion, was the abortion-backing German society of obstetricians/gynecologists, which pounced on the opportunity to “affirm” the Cardinal in his statement on the EC pills not being abortifacient.

There are however numerous other studies and even MAP manufacturers that admit that the MAPs do have post-fertilization effects – in other words — are indeed abortifacient.

The most objective view of the situation admits that there are studies giving evidence both ways. Some suggest post-fertilization effects and some don’t ,depending on the hormone used and the time administered.

This view comes not from pro-life activists but from the leading researcher in the area, James Trussell, in a review released only this month. Trussel is by no means a pro-life activist. He is an avid proponent of contraception, MAP included. In his recent review of the literature, Trussell summarizes: “To make an informed choice, women must know that [emergency contraception pills]… prevent pregnancy primarily by delaying or inhibiting ovulation and inhibiting fertilization, but may at times inhibit implantation of a fertilized egg in the endometrium.”

NO TO ABORTIFACIENTS, NOW AND ALWAYS

Despite the indication that administration of MAP may be possible, in that second release the Cardinal says plainly that no abortifacient (a drug having the possibility of causing the already conceived child not to be able to implant) may be used in Catholic hospitals even for cases of rape.

To those who would argue for the use of abortifacients by suggesting embryos often fail to implant in nature without intervention, the Cardinal responds: “Termination of a human life by nature is called a natural phenomenon. Its deliberate imitation is called manslaughter.”

Should the action of the EC pills be purely contraceptive – preventing ovulation from occurring thus blocking conception – then Cardinal Meisner deems them acceptable for use in rape cases. “If a medication that hinders conception is used after a rape with the purpose of avoiding fertilization, then this is acceptable in my view,” he said.

The German bishops will be convening in a plenary session later this month, and the matter of MAPs is up for discussion. That discussion will no doubt be influenced by researchers with greater objectivity and also by consultation with Vatican guidelines on the matter.

An authoritative Vatican document on MAP was issued by the Pontifical Academy for Life (PAV) in 2000. That document condemned MAPs as akin to “chemical abortion” and “absolutely” unlawful.

The document was however questioned by theologians since it did not address the use of the MAP in cases of rape.

In 2008, LifeSiteNews interviewed the head of the PAV, and he confirmed the use of MAPs were not permissible even in cases of rape. Asked if there was an exception for rape cases in terms of Catholic hospitals being able to administer MAPs, Bishop Elio Sgreccia replied, “No. It is not able to prevent the rape. But it is able to eliminate the embryo.”

In the final analysis, no Catholic bishop would allow for MAP at Catholic hospitals if he believed it would have an abortifacient effect.

Even the chance of it causing an abortion would be enough to rule it out, because in a case where there is uncertainty in a matter of life and death, the Church teaches that one must err on the side of caution – the side of protecting life.