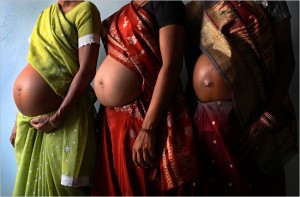 Good science fiction tells a morality tale about the dangerous directions in which contemporary society is heading. For example, Brave New World—perhaps the most prescient novel ever written—warned against the dystopian impact that using biotechnology to perfect the human race would have on society.

Similarly, the Dune novels—which feature a breeding device known as an “Axlotl tank” with which futuristic biotechnologists gestate clones of the dead called “ghoulas”—reveal the potential consequences of objectifying gestation and birth. In one novel, we learn the shocking truth about Axlotl tanks: They are living women who have been lobotomized into insentience so that their uteruses can be used as biologically alive breeding vats.

We don’t turn women into Axlotl tanks, of course, but we do biologically colonize the gestational capacities of destitute and desperate women around the world. Indeed, an international commercial surrogacy sector has grown as a subsidiary of the IVF industry, in which the well-off pay mostly poor women to carry their babies.

Commercial surrogate apologists depict these breeding contracts as win-win. But increasingly, stories are coming out detailing the harm caused to “gestational carriers”—the dehumanizing term the industry uses for surrogate mothers. Now, a study has been published by the Center for Social Research about abuses in India—a nation that is to surrogacy what Detroit used to be to automobiles—illustrating that Indian surrogates are mistreated as so many gestational serfs. From, “Surrogate Motherhood-Ethical or Commercial” (my emphasis):

Surrogacy degrades a pregnancy to a service and a baby to a product. Experience shows that like any other commercial dealing the customer lays down his/her conditions before purchasing the goods. The surrogate may be forced to terminate the pregnancy if so desired by the contracting couple and she will not be able to terminate it if it is against the desire of the couple. She has difficulty in keeping her own baby. There have been instances where the contracting individual has specified the sex of the baby as well, refused to take the baby if it is not normal, and filed a suite against the surrogate saying she had broken the contract.

Where is the morality in that? What I see are foreign people wanting what they want and not caring much who gets hurt so long as they get it. More from the report:

Of course they get attached! That’s part of the biological process of gestation. Then—adding to the cruelty—they have to pretend they did not, since it won’t matter anyway.

Some claim it is just the marketplace in action, and a deal is a deal. But ethical markets require equivalent levels of bargaining power between buyers and sellers. India doesn’t come close: Fifty-sixty percent of the surrogates are illiterate or only have an elementary school-level education. The clinics often don’t sign the contracts, making it difficult for the surrogate mothers to prove they were involved if something goes wrong. Indeed, despite regulations requiring it, the women usually are not given a copy of the contract they sign. And, the surrogates may receive only a few percent of the total fee received by the gestational brokers.

Not only that, but the women are depersonalized in their care:

Given the lack of meaningful oversight of the surrogacy industry and the objectifying values it is based upon, it is hardly surprising that other abuses have been uncovered. For example:

Whenever I write about this topic, I hear from angry infertile women or couples, who tell me of their pain and their determination to “sacrifice anything” to have a child. But that is precisely the problem. The true sacrifices are primarily being made by the women who are paid to gestate, give birth, and turn over a baby to the buyer—sometimes leaving devastation in their wake.

And here’s a terrible irony: It can be anguishing not to be able to have a healthy child. But it is even more painful to be a child without a home. Adoption is the answer to such heartbreak—not pushing parenthood into the ethical badlands. Alas, our increasing sense of entitlement blinds some of us to the real potential for win-win parenthood.

Reprinted with permission by The Center for Bioethics and Culture.
Share. Twitter Facebook Google+ Pinterest LinkedIn Tumblr Email
Previous ArticleA Theology of Women? What Does Pope Francis Mean?
Next Article Considerations Regarding Proposals to Give Legal Recognition to Unions Between Homosexual Persons