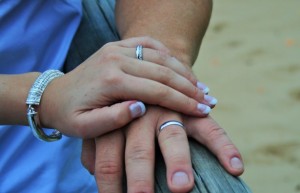 When my family migrated from the Philippines to the United States in 1986, I didn’t want to go. I wanted to finish college at home and settle down with whomever God picked out for me to marry, after a courtship of at least five years.

But God laughed at my plans.

I met my future husband, Alfredo, a year after arriving in America. Though he and I were fast friends at first, he made it clear almost from the start that this was a courtship in progress. He was a man on a mission and was out to get me, simple as that.

By today’s standards, I was young to be considering marriage, but my own parents’ happy marriage gave me confidence that love ever-after was possible. Through this lens, I learned early on how to distinguish boys from men, and I knew I couldn’t marry a boy.

When I met my husband, he was working for a testing lab while completing his master’s degree in mechanical engineering. This was a man who was not afraid of hard work.

We had frequent one-on-one dates, but we also spent lots of time with family and friends. We grew as a couple through these interactions and at the same time built up a support group around us, made up of people who shared our values.

I was not the only one he courted. He paid attention and was kind to the rest of my family, especially my grandfather and my two younger brothers. None of it was a put-on to impress me. To this day, he’s the same thoughtful man. When we visit my parents he takes the time to check their car, faucets and heating, to make sure things are in working order. And he still coaches my brothers from time to time on jobs and other life decisions.

My husband knew he had something good to offer and all he had to do was convince me to accept the gift. He was basically asking if I would build a life with him, and carry his crosses and share his joys. It wasn’t difficult to get to yes.

My husband and I are both prayerful people and believe that God designed us for each other. By the time we got to pre-Cana, we knew each other well and knew that married life wouldn’t bring us too many unpleasant surprises.

Courtship and dating are so misunderstood these days. Many seem to think of them as a dichotomy, but they should be overlapping parts of a healthy whole. Romance is an essential element of building intimacy that cannot be overlooked because it sets the tone for the relationship and how it will grow through the years.

Feelings and emotions are not the whole love story, but we cannot dismiss them as though they are faulty components of the human psyche. Our intellect and will are vital, yet we are also emotional beings, and romance is what feeds emotion. It’s all about developing a couple-language, and we developed one that we have been conversing with for more than 25 years.

While chocolates, roses, songs, and love letters have always been part of the picture where my husband and I are concerned, the enduring themes that have supported our relationship are service and sacrifice. I’ve always thought of courtship as giving of oneself, not as a commodity, but as a gift. I knew what to do when I found the man who offered me both eros and agape, his hands open, his sincerity unwavering.

My heart breaks when I hear stories today of young people having lost the ability to date, who have no notion of courtship. When he was courting me, I got the message that this man was willing to give up his life for me. Here was someone I could follow, because he follows Christ. And saying yes to my husband was ultimately saying yes to God’s plan for me.

Reprinted with permission from FathersForGood.org.