Trending Now
You are at:Home»Featured»Ghost Season
By Michael Baruzzini on October 30, 2011 Featured, Live in Christ, MyChurchParish.com

I do not see ghosts; I only see their inherent probability – G. K. Chesterton. 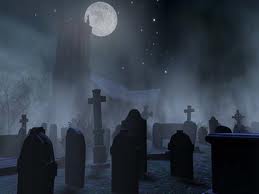 This is the season of ghosts. Halloween has been co-opted as a secular holiday, poised to overtake Christmas in terms of commercial sales, and distorted in many cases into a grotesque and diabolical celebration of the macabre and ugly. While Christians are right to avoid the commercialist and occult side of the holiday, the uncanny side of the celebration is in fact Christian in origin. The Feast of All Saints and its eve, Halloween, along with All Souls’ Day make up a celebration of all the saints in Heaven and of all the departed souls who are being prepared for eternal glory. In this winding down of the year, the Church urges Christians to dwell on the passing of things and the life to come. In an age of appearance, materialism, and skepticism, reminders of the supernatural are all the more important.

In a Twitter age, however, we dwell in a landscape of fleeting phenomena. Things flash before our eyes and vanish. What was cutting-age only ten years ago is now obsolete and sits forgotten in the attic. While reading an illustrated history of my town recently, I noted how much had changed in the century since the sepia photos of the young town were taken. Great grass fields now hold subdivisions. Horses have been replaced by cars. Top hats have given way to ball-caps. Everything has changed, and all that once was has vanished.

Or has it? My town is settled at the foot of the Rocky Mountains, and looming in the background of the dusty old photographs, the outline of the mountains against the sky is remarkably similar. Every rocky peak captured in the old pictures is still visible today. The human city has changed; the ancient mountains have endured. Thus despite all that is fleeting, the world is still composed of some things that last. In an age dominated by materialism in philosophy and scientism in knowledge, we are tempted to regard ever-changing appearances as more real than enduring things underneath. We have forgotten about persistent substances. We have allowed the fleeting things of life to cloud our vision of the eternal.

Our language betrays our confusion. We speak of things dying or passing away as if they simply wear out their existence. A quick look back at those mountains in the photographs reveals our error, though. A hike through the foothills takes one on a tour of boulders that have sat unchanged for millennia. In extraordinary cases, pristine artifacts from ancient civilizations have been found as fresh as the day they were made. They lasted because they were protected from damage. On their own, things persist. When things do die or cease to exist, thus, it is because they are actively destroyed. A building falls because forces knock it down – gravity, the wind, termites eating its structure. A mountain falls because water and wind tear it apart, grain by grain. A man dies not because he just fades away, but because some force or thing – plaque in the arteries, destruction of muscle, a lead bullet — obstructs the functioning of his body. Bodies do not die because they substantially weaken or slowly evaporate; they die because they are broken.

A spirit, on the other hand, does not break or decompose. This is the heart of Thomas Aquinas’ argument for the immortality of the soul. A thing without parts cannot be taken apart. A spiritual substance can’t be weathered down and eroded. If even corruptible natural things like boulders and mountains endure as long as they aren’t deconstructed, won’t a spiritual thing be even more enduring?

Ghosts, in other words, must endure. Even aside from philosophy and revelation, this instinctive insight has fired the human imagination about the afterlife since long before Christianity appeared. Men whistle past graveyards not because they fear the presence of nothing, but because they fear the presence of something. The spookiness of a graveyard comes from the feeling that the dead have not really vanished, and that they are still in some way with us.

Halloween, with its ghosts and ghouls and phantasms, recalls death to our mind, but not death in the sense of the ending of things. In the Christian imagination, Halloween rather recalls, to a skeptical and material world, the endurance of things beyond death. There is somberness in the reminder that earthly pursuits will not be enough to cheat death; but there is also a playfulness in the happy realization that death is not the simple end. We endure, and life goes on. The day after Halloween, the Feast of All Saints, reminds us just how glorious that endurance can be.