Trending Now
You are at:Home»Featured»Gift from Pope John Paul II for Persecuted WYD11 Pilgrims
By ACN-USA News on August 23, 2011 Featured, Those in Need 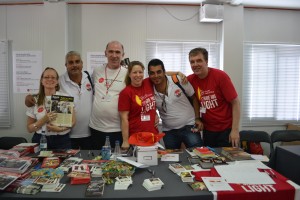 Rosaries and medals blessed by Pope John Paul II were given to young Catholics from persecuted countries at World Youth Day.

Catholic charity Aid to the Church in Need (ACN), which held an exhibition about Christian persecution as part of World Youth Day’s cultural program in Madrid, gave the blessed objects to visitors to the exhibition from countries where Christians experience violence because of their religion.

The rosaries, miraculous medals, and medallions of the Sacred and Immaculate hearts given to the pilgrims were blessed by Pope John Paul II during an audience on August 20th, 1986.

Among the first young people to receive the rosaries and medals were pilgrims from Egypt.

Edward Clancy, ACN-USA’s Director of Evangelization and Outreach presented the first pouch of blessed items to a young man from Egypt.

Mr. Clancy said, “Initially, he was very surprised to be given the gift and seemed to be deeply moved by the gesture.”

“He understood that the rosary and other devotional objects crossed cultural boundaries and that we were saying that, although we may be in different parts of the world, we are still praying for you and thinking of you.”

A priest from Alexandria in Egypt, who asked to remain anonymous for fear of possible attack, spoke out about the terrible situation affecting Christians in the country.

Speaking about his group’s experience of World Youth Day, he said, “For the young people it is like paradise here, because we live with trouble every day in Egypt.”

Referring to the problems young Christians experience, particularly women who can be targeted by kidnappers, he said: “The young people are scared and nervous because of the religious situation [in Egypt].”

The priest, who took his group to the ACN exhibit, added that living in a country where they were a small minority they were strengthened in their faith by seeing they were part of the universal church, although the young people were physically very tired as they had not been getting much sleep at World Youth Day.

“But spiritually they are very happy. They see so many Christians from all over the world, so they feel very happy.”

More than 800 young pilgrims from Egypt were in Madrid for World Youth Day.