Trending Now
You are at:Home»Featured»“God Bless Them?” Congresswoman Pelosi on the Wall Street Protests
By Dr. Paul Kengor on October 18, 2011 Featured, Government & Politics 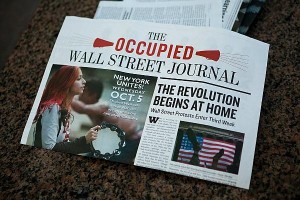 Congresswoman Nancy Pelosi (D-Calif.) has a lengthy track record of jaw-dropping political statements. Among them, the lifelong Roman Catholic has been a huge disappointment to her Church on matters of unborn human life, which I’ve personally written about on many occasions.

But it isn’t just Pelosi’s actions on the sanctity and dignity of human life. Her supportive comments on radical people and causes generally have been legion. For years, Congresswoman Pelosi has made outrageous statements, from the Cold War to the Middle East, that consistently leave one speechless.

I’ll never forget her stunning House floor tribute to Harry Bridges, a notorious communist/labor agitator who spent a lifetime lying about his secret loyalties to Stalin and the Communist Party USA (CPUSA), even while his position on the Central Committee of CPUSA was directly authorized by Stalin’s Kremlin. “Today we can all hold our heads high and be proud of Harry Bridges’ legacy,” said Pelosi. “Harry Bridges is … beloved by the workers of this nation, and recognized as one of the most important labor leaders in the world.” (Click here to watch.)

Bizarre statements about the extreme Left are old hat for Congresswoman Pelosi. And now, add yet another.

Commenting on the out-of-control gang of Wall Street “Occupiers,” Pelosi glowed and said warmly, “God bless them for their spontaneity.”

What a remarkably strange thing to say. Of everything said about this Manhattan mob, this strikes me as the most bewildering.

Well, we certainly don’t want God to damn them. We would like God to bless everyone. We should pray for everyone.

But, frankly, I doubt this particular band of protestors is even thinking along such lines. This is an extremely secular, militant crowd. These aren’t exactly the nuns who taught Nancy Pelosi in parochial school.

Ironically, Pelosi’s comments came at almost the same time a representative of the mob, Roseanne Barr, literally called for guillotining—yes, guillotining—wealthy American bankers. She openly called for their forcible “re-education” and execution.

I have friends and students there in New York observing this spectacle. They email me daily. One took a picture (click here) of two homosexual men embracing while holding a sign imploring the brethren to “KILL YOUR PARENTS.”

As he snapped this picture, the throng initiated a frightening march upon the homes of those loathsome “millionaires and billionaires” that President Obama targets unceasingly with his terribly destructive class-based rhetoric. (Click here and here to read more.)

It’s only a matter of time before this angry, envy-filled insurrection turns violent.

“God bless them?” I say “God help them”—and help those they threaten to hurt.

Think about that strange inflection from Pelosi: “God bless them.” What does it normally mean, or how is it typically applied?

It’s the kind of sentiment you usually wish to a church secretary or Religious Ed director who unselfishly does five peoples’ jobs for $18,000 per year; to your pastor on call 24/7; to a little girls’ choir singing angelically; to earnest kids raising money for a soup kitchen; to a woman suffering in silence from breast cancer; to Salvation Army volunteers paying peoples’ heating bills; to a Crisis Pregnancy Center volunteer who works the rape hotline; to a nursing-home attendant who cheerfully bathes mentally challenged adults; to the guy who snow-blows every driveway on the block; to the black college students who stoically entered an Alabama school building while ugly rednecks spat on them; to Rosa Parks.

“God bless them” isn’t the kind of sentiment anyone would normally direct to a ranting, raving, raging, screaming crush of self-professed “occupiers” bordering on anarchy without nary a whiff of religious motivation. I seriously doubt that the horde smashing and littering the streets even cares for someone to “bless” their event. Are there prayer chains and prayer circles going on there?

As anyone paying attention can see, this is an unkempt, cursing lot, some of them trust-fund kids on voluntary sabbatical from $100,000 (per year) elite educations. They hoist a Starbucks in one hand and iPhone in the other while shouting “down with capitalism!” As anyone there will tell you, some elements of the crowd are engaging in everything from group sex to group bong sessions.

This is not a Norman Rockwell picture. It’s about as cute as an LSD trip, as quaint and charming and innocent as a Grateful Dead concert.

Is this the kind of thing Christians are expected to bless?

To Congresswoman Pelosi, apparently it is. Yet again, her comments leave one dumbfounded. This latest statement has taken me a few days to try to assimilate.