Trending Now
You are at:Home»Featured»Godwin’s Law and the American Liberal
By John Kirkwood on November 1, 2013 Featured, Government & Politics, The Social Order 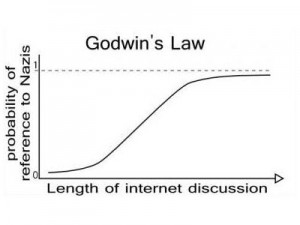 Godwin’s Law: “As on online discussion grows longer, the probability of a comparison involving Nazis or Hitler approaches 1.”

ON GAY MARRIAGE:
EMAIL: “You’re on the wrong side of history on this, people like you are this generations Ku Klux Klan.”

Secondly, it was “people like me” that freed the slaves and that fought the Klan.  Christianity is the great liberator.”

Earlier this week, Florida Democratic Rep. Alan Grayson sent out a fundraising email with a picture of a burning cross, which was used as a “t” to spell out “tea party.”

The email concluded, “Now What You Know What The ‘T’ Stands For!”

Never mind that the KKK was started by Democrats and strung up both blacks and Republicans; Grayson never misses an opportunity to self-inspect his own alimentary canal … from the tail end.

When the left stifles speech it is chic and heroic; when they accuse the right of stifling speech, it’s fascism, McCarthyism, Footloose and The Harper Valley PTA.  To the liberal, ridicule and alienation are sacrosanct, summarized well by Saul Alinsky’s RULES FOR RADICALS:

Ridicule is man’s most potent weapon.  There is no defense.  It’s irrational. It’s infuriating.  It also works as a key pressure point to force the enemy into concessions …  Pick the target, freeze it, personalize it, and polarize it.  Cut off the support network and isolate the target from sympathy.  Go after people and not institutions; people hurt faster than institutions.

And it’s not only online discussions that prove Godwin’s Law, I remember sitting at lunch with a construction crew when one of the carpenters brought up my work in the pro-life movement.  By the time his foot-long Subway Club had been inhaled to the halfway point, he had already dropped the Nazi card.

I don’t normally suffer fools but, because of the audience, I decided to play along.

“So let me get this straight, you’re implying that I am a Nazi because I believe that a baby in its mother’s womb has an innate right to life?  And that a mother, even on a bad hair day, shouldn’t incinerate it with chemicals or have a Mengele like doctor tear her unborn son or daughter apart with forceps, is that right?

J.D. the carpenter: “Yep, tea-baggers are always telling people how to live, just like the Nazis.  No offense, maybe you’re not one of them, but haters need to be called out.  Hating a dude just because he’s gay is bull-sh*t!”

Me: “Not telling people how to live, in this case, just telling them not to murder, but let me tell you who I am by first telling you who the Nazis were because frankly, your ignorance is downright embarrassing.

Adolf Hitler was a vegetarian who banned smoking in all public buildings after his party surreptitiously burned down the Reichstag and cast the blame on their political rivals.

When the Nazis annexed the Sudetenland, of the very first laws that were passed were those prohibiting gun ownership and legalizing abortions.  As a matter of fact, certain abortions were encouraged.

His “civilian army” was founded and run by radical homosexuals who bullied and battered those with opposing views.  (see THE PINK SWASTIKA, by Scott Lively)

In a purge to separate “Jew and State,” Jews were expelled from the Army, from schools, and eventually from public places.  The persecution that ended in ovens was started in the public square by passing laws to tax them, restrict them and identify them.  Oh, and one more thing J.D., the Nazis were socialists.  You did know that, right?

Nazis redefined marriage, encouraged promiscuity, used the power of taxation to suppress political enemies and subverted the press to carry their message.

They did have fabulous uniforms though and a real flair for drama.”

(J.D. the Carpenter remembers that he has a sandwich and takes an interest.  I guess he’s hungry.)

“So tell me again, friend, which side is more reminiscent of the National Socialist German Worker’s Party?   The one that booed God and Jerusalem three times from their national convention; the one that hasn’t met a tax, an abortion or an abomination that it doesn’t endorse, celebrate and force on others or the tea party that supports life and liberty, that believes in choice unless it involves a crime to another, that believes that with great sacrifice comes great reward, that will stoop to help others climb up but will refuse to bow and be pilfered?

J.D. the Carpenter: “Dude, relax!  All right already!  I just think you should stop messing with other people’s lives.”

At this point J.D. walked away but on the chance he’s reading this column, here is what I would have said had you stayed to finish your foot-long.

“You mean like telling them what they can and can’t eat?  Like telling them to trade in the Hummer for the Prius?  Like legislating how much water they can flush?  How about the government panel that will tell Grandma to take the pill and not have the surgery?

Is telling and taxing people to put down the Big Gulp, the Big Mac, the cigarette, the foie-gras and the Twinkie and to pick up the wheat grass, “messing with peoples’ lives?”

Does kicking Christians out of the Air Force while inviting Pandora’s closet in qualify?

How about shouting down conservative speakers at Universities and kicking them off panels, stations and shows?  How about suing Christian bakers, photographers, and bed and breakfast owners who don’t bow and kiss the rainbow ring?

[Editor’s note: this article first appeared at ClashDaily.com. Godwin’s Law: scientists often refer to probabilities as lying between zero and one. Thus, an event with a 50% chance of happening would have a 0.5 probability; an impossible event would have a probability of 0, and a certain event, a probability of 1. Thus, Godwin’s Law means that the longer an Internet discussion continues, the more the Hitler or Nazi comparison becomes inevitable.]