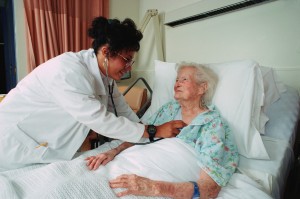 Last month Google announced a new medical company called Calico, whose explicit aim is to take on aging itself. But what will Google’s approach be? And what other research into prolonging life already exists?…

Calico — or the California Life Company — has been set up to research subjects related to aging and its associated diseases. Announcing Calico at a media briefing, Google said that the new and independent company will largely focus on age-attendant conditions such as Alzheimer’s, cancer and heart disease.

Larry Page, Google’s ever youthful CEO said: “Illness and aging affect all our families. With some longer term, moonshot thinking around healthcare and biotechnology, I believe we can improve millions of lives.”

But the question is, what will Calico actually do?

The article, titled “How Google’s Calico aims to fight aging and ‘solve death’,” speculates about everything from cryogenics to cloning to nanotechnology as Calico’s focus.

Calico may be looking at diseases like Alzheimer’s, heart disease and cancer initially, but I speculate that part of Calico’s approach will be working on an interface between man and machine. This is a Google company after all. I imagine that Calico will be at least looking into the possibility of uploading the human consciousness into the digital realm.

Can immortality really be reached with organic systems that are not designed for super longevity? Will organic systems be jettisoned for non-organic medium if attempts at curing disease do not tack on the desired years?

Futurist and transhumanist, Ray Kurzweil thinks that we will mostly non-organic beings by the 2030s. That is only two decades away. Kurzweil also happens to be Google’s director of engineering.

Longevity expert, Aubrey de Grey is interviewed by CNN for his take on Calico. He thinks:

The goal of Calico is to keep people healthy irrespective of their age, and ill-health is the main cause of death, so increased longevity will be an inevitable and excellent side-effect of such work.

That is true. The more medicine progresses and cures disease, the longer the human life span will be. That is a natural by-product, but the main focus is curing disease, not living forever.

When the focus is living forever does that change things? If the end game is not curing cancer or Alzheimer’s, but achieving eternal life on earth, is that endeavor no longer in the realm of medicine? Is that instead transhumanism, a philosophy whose very nature rejects what it means to be human?

It seems a very gray area. I look forward to more guidance on these difficult questions from the Church. In this technological age, we need teaching that will help us draw that important line between medicine and the quest for immortality.