Trending Now
You are at:Home»Featured»Gregorian Chant: “Pride of Place”
By Mary Anne Moresco on March 16, 2011 Featured, Live in Christ 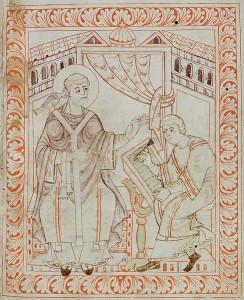 Look up “Gregorian chant” in just about any current dictionary or encyclopedia and you will see a description that says it “is the liturgical chant of the Roman Catholic Church.” Notice that the tense of the verb “to be” is in its present form of “is.”

What Should Customarily Be?

The definition doesn’t place Gregorian chant in the past tense and tell us that it “was” a liturgical chant that we Catholics long since forgot. If it is our current liturgical chant, isn’t there something odd in the fact that so many of us Roman Catholics never hear it at Mass?

Redemptionis Sacramentum (RS) is an instruction issued by the Congregation for Divine Worship and the Discipline of the Sacrament. This instruction was developed to help stop abuses in the liturgy and it reiterated the right every Catholic has to truly sacred music in the liturgy. “It is the right of the community of Christ’s faithful that especially in the Sunday celebration there should customarily be true and suitable sacred music…”(RS 57).

Although many of us see little or no evidence of it, the Church holds a high preference for Gregorian chant in the Mass. The General Instruction of the Roman Missal (GIRM 41) states that “Gregorian chant holds pride of place because it is proper to the Roman Liturgy” [emphasis mine]. Again we note the tense of the verb “to hold.” Rome could have said “once held.” But they didn’t. They said “holds.” There goes that present tense popping up at us again.

Some think that Gregorian chant was swept out the door by Vatican II. But Vatican II never swept Gregorian chant away. The real truth is that Vatican II preferred Gregorian chant. The Vatican II document Sacrosanctum Concilium (116) stated that “the Church acknowledges Gregorian chant as especially suited to the Roman liturgy; therefore, other things being equal, it should be given pride of place in liturgical services.” This past December, Monsignor Valenti Miserachs Grau, President of the Pontifical Institute of Sacred Music, explained the problem: “Gregorian chant has been unjustly abandoned and its place in the life of the Church should be recovered” [emphasis mine].

I’ve waited expectantly for Gregorian chant to recover its place at Mass in response to Rome’s instruction. The way that I look at it, if Rome has a preference for it, well, then I prefer it, too. It seemed for a while that Gregorian chant wasn’t going to come to me, so I went to it. I asked for and received CDs of Gregorian chant at Christmas.

So now I was in the odd situation where I was hearing Gregorian chant at home, but not in church. That was until one Friday night during Lent at Stations of the Cross. I knelt before the tabernacle to pray before the start of Stations. And that is when I heard it. First it echoed through the church. Then it echoed through my heart and soothed my soul with songs so lovely and so joyous that that there might well have been choirs of angels singing and lifting me upon their wings for flight. This sacred music lifted my prayers to a higher plane.

But it did more than that. It rooted those in the church with a solid sense of spiritual unity and rich tradition. At one point, I glanced quickly around at fellow worshipers. With faces all aglow and sparkling eyes, they let me know with approving nods that their joy was equal to, if not surpassing mine. Because Gregorian chant is the traditional music of the Church, it unites us to the Church. This unity was there that night at Stations because an individual in church said yes to Rome, and in saying yes to Rome, thus said yes to Christ. Just as Our Lady surrendered all to God in her “fiat” (“let it be done to me according to thy word”) and Christ surrendered all to God at Gethsemane (“Father, not my will but Thy will be done”), so we are called to surrender everything to the Father — even the music that we play in church and at Mass.

The Banal or the Holy?

Gregorian chant opens the door between heaven and earth and rather than bringing the world into the church (which some pop Christian music can) it lifts us up toward heaven. Our Holy Father Pope Benedict XVI (then Joseph Cardinal Ratzinger) expounded on the problems with pop music in his book, The Spirit of the Liturgy: “Pop music…is aimed at the phenomenon of the masses, is industrially produced, and…has to be described as a cult of the banal” (p. 148). And because it is banal, no matter the good intent, pop music can stifle our yearning for holiness and block our journey in spiritual depth.

There is lots of fun and lively popular music at youth conferences and conventions in this modern age. Such music can come and go at almost anybody’s whim. Sometimes this lively music is transported to the church building, before the Tabernacle of our Lord, during the Most Holy Sacrifice of the Mass. In an interview from Rome, Francis Cardinal Arinze, Prefect of the Congregation for Divine Worship and the Sacraments, gently reminded us that the music we find at youth conventions is different from the music that we sing in church. He had this to say of singing and musical instruments at Mass:

Surrendering to entertainment and popular music is easy. Surrendering to Christ and Rome is not. But who said Christianity was easy? Rome has given plain instructions that Gregorian chant ought to hold “pride of place” at our Catholic Masses. For love of God — and for our Holy Father, the bishop of Rome, who cares for us so tenderly — let’s show our loyalty to Rome. Let’s demonstrate that loyalty by restoring Gregorian chant to its most proper “pride of place” in the Holy Sacrifice of the Mass.