Trending Now
You are at:Home»Featured»Lent — Sharing in the Obedience of Jesus
By Shane Kapler on March 16, 2011 Featured, Live in Christ 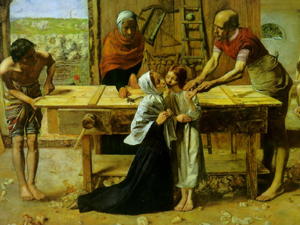 “Has the LORD as great delight in burnt offerings and sacrifices, as in obeying the voice of the LORD?  Behold, to obey is better than sacrifice”  (1 Samuel 15:22).  That’s a truth to keep central as we enter this season of Lent.  It’s possible to make a grandiose resolution and miss the reality at the heart of the season: We are to take on the image of Him Who “humbled himself and became obedient unto death, even death on a cross” (Philippians 2:8).

About [two years]ago one of my closest friends started reading Mother Teresa, Come Be My Light. My friend, who is Lutheran, soon asked me if I could explain something to her: it seemed very strange that Mother Teresa, who God was clearly speaking to and giving a mission, would have to go and receive permission to undertake the work from her religious superiors. At first her superiors made her delay. Why would Teresa submit to that, when she knew God was speaking to her?

What a fantastic question! Looking back, my response was alright. I talked about how it was a mark of humility, and a safeguard against being deceived, to submit inspirations and private revelations to those God has allowed to assume roles of authority within a religious body. I also shared how, in private revelations to nuns and religious brothers, Jesus often instructs the recipients that they must always submit themselves to their religious superiors, even when it means delaying His requested action. These nuns and brothers took a vow of obedience when they entered their respective orders, and the Lord insists that it be adhered to. But what I failed to point out, the very heart of the matter, was what St. Anthony of Padua saw in the Gospel read a few weeks back on the Feast of the Holy Family. (My thanks to the Daily Gospel apostolate for emailing such quality commentary every day of the year.)

Jesus was twelve years old and stayed behind in Jerusalem following a family trip there, without notifying his parents. After three days of frantic searching Mary and Joseph finally found Him in the Temple:

“Son, why have you treated us so? Behold, your father and I have been looking for you anxiously.” And he said to them, “How is it that you sought me? Did you not know that I must be in my Father’s house?” And they did not understand the saying which he spoke to them. And he went down with them and came to Nazareth, and was obedient to them; and his mother kept all these things in her heart. And Jesus increased in wisdom and in stature, and in favor with God and man. (Luke 2:48-52)

“He was subject to them.” With these words let all pride dissolve, all rigidness crumble, all disobedience submit. “He was subject to them.” Who? In brief, he who created all things from nothing; he who, as Isaiah says, “has cupped in his hand the waters of the sea and marked off the heavens with a span; who has held in a measure the dust of the earth, weighed the mountains in scales and the hills in a balance” (40,12)…This is he who, great and powerful though he be, was subject. And subject to whom? To a workman and a poor young maid … So no longer hesitate to obey or be submissive …

There are people of wisdom within religious orders but it is by means of simple men that God brought them there. God chose the foolish and weak, the lowly and ignorant to bring together those who were wise, powerful and of noble birth through them, “so that no human being might boast in itself” (cf. 1 Cor. 1,26-29) but in him who came down, who came to Nazareth, and who was subject.

Our obedience is a participation in the very obedience of Jesus! The Father’s Revelation in Person, made His plans subject to “a workman and a poor young maid.” So whenever one of us submits ourselves to the decisions of our bishop or the disciplines (traditions) of the Church as opposed to our own personal “inspirations,” it is Jesus’ obedience that we are tapping into; and that is life’s very goal! We’ve heard time and again that the Church is the Family of God. In truth, it is the Family of Nazareth thrown open to the entire world. And those God places in leadership may not be the smartest, or the most “charismatic,” or the most plugged-in as to what He wants to accomplish in the moment; but they are to be obeyed, because doing so places us firmly in the One Who obeyed “a workman and a poor young maid.”  May the Lord grant us a holy and profitable Lent!