Trending Now
You are at:Home»Featured»Group Marriage is Next, Admits Dutch ‘Father’ of Same-Sex ‘Marriage’
By Hilary White on March 16, 2013 Featured, The Homosexual Agenda 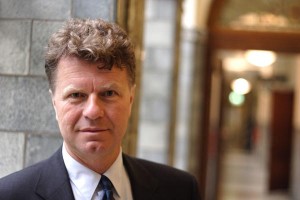 Boris Dittrich, the homosexual activist called the “father” of the political movement in favor of Dutch same-sex “marriage”, has admitted that group marriages of three or more people, is the next, inevitable logical step in the dismantling of the western world’s traditional marriage laws.

The redefinition of marriage, he said, has led to discussions of allowing group marriages of three or more persons. “But that’s the beginning of something completely new,” he added. He predicted that this next step “will take a lot of years.”

Dittrich admitted that “it took a long time” to push the notion of “marriage equality” through the political process. Until he and other homosexual activists started the process in the Netherlands, “there was nowhere in the world marriage equality existed”. He started the discussion as early as 1994 but it took another “seven years of debate” before a bill could be presented.

He pointed out that opponents of the change in the Netherlands brought the same arguments and objections that are currently being made in France, which is facing a similar legal change.

In the countries where it has been created, most of the legislators pushing for gay “marriage” started the process by promising that “civil partnerships” were as far as it would go. In the UK, when homosexualists pushed for civil unions, the public was assured that the category of civil partnerships was being created solely in order to ensure fair taxation and property inheritance laws for people in same-sex relationships.

This line of argument was widely accepted even by religious leaders who denied, almost as vigorously as the lobbyists themselves, that there was any danger of the definition of marriage being abolished. British MPs supporting the plan insisted that civil partnerships were the end of the line and that marriage would remain untouched.

Dittrich, however, told Yagg that bringing in civil partnerships was always intended as the first step in the larger plan. When he entered Parliament as an MP, Dittrich said he “immediately” started to talk about same-sex “marriage” but quickly realized that the public was not ready to accept it. A slower route had to be taken.

“We thought it might be psychologically better to first introduce registered partnerships,” he said. Once this was established in 1998, he said that “people got used to the idea that two men or two women went to the municipality, had their relationship recognized by the law. And people called it a ‘gay marriage’.

“So for the general public there was no distinction. And people got used to it and they realized there was no revolution that broke out and the country didn’t fall into a moral abyss.

“So then the next step of marriage equality, and really being equal, was a logical step.”

The most effective wedge to bring the idea before the public was to “focus on the principles of equality and non-discrimination,” and emphasise the “distinction between Church and state.”

“So if people are against marriage between two people of the same sex, well, OK, that’s fine they don’t have to deal with it. I told all these religious people, ‘we don’t touch religious marriage,’ but we are talking about civil marriage.”

“And according to the law, everybody should be treated equally.”