Trending Now
You are at:Home»Columnists»Here’s the Guy Rudy Is Talking About
By Dr. Paul Kengor on February 24, 2015 Columnists, Featured 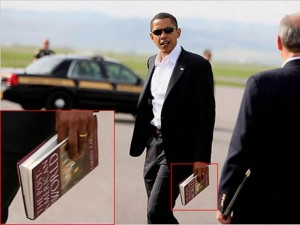 Rudy Giuliani is being roundly criticized for several recent statements he has made about President Barack Obama, including the claim that Obama in his youth was influenced by a literal communist. I cannot address all of Giuliani’s remarks, but I can certainly speak to the influence of the communist he referred to. In short, Rudy was correct and he even had Obama’s exact age (nine) right when he was first introduced to this person.

“From the time he was 9 years old, he was influenced by Frank Marshall Davis, who was a communist,” Giuliani said.

I can’t say for certain that Rudy Giuliani read my book, which is titled, The Communist: Frank Marshall Davis, The Untold Story of Barack Obama’s Mentor, but he has those facts absolutely right. If I may, I’d like to add some crucial detail:

Frank Marshall Davis (1905-87) was a hardcore communist, an actual card-carrying member of Communist Party USA (CPUSA), who spent time with a young Barack Obama throughout the 1970s, right up until the moment Obama left Hawaii for Occidental College in 1979.

Davis joined the Communist Party in Chicago in the early 1940s. CPUSA members swore an oath to “ensure the triumph of Soviet power in the United States.” They were dedicated to what CPUSA leader William Z. Foster had openly called “Soviet America.” Notably, Davis joined CPUSA after the Hitler-Stalin Pact, a time when many American communists (especially Jewish communists) had bolted the Party in disgust that their Soviet Union had allied with Hitler.

As we know from Davis’s declassified 600-page FBI file (and other sources), his Party card number was 47544. He was very active. In 1946, he became the founding editor-in-chief of the Chicago Star, the Party-line newspaper for Chicago. There, Davis shared the op-ed page with the likes of Howard Fast, a “Stalin Prize” winner, and Senator Claude “Red” Pepper, who, at the time, sponsored the bill to nationalize healthcare in the United States.

Davis left the Star in 1948 for Hawaii, where he would write for the Party-line organ there, the Honolulu Record. His politics remained so radical that the FBI had him under continued surveillance. The federal government actually placed Davis on the Security Index, meaning that in the event of a war between the United States and USSR, Barack Obama’s mentor could be placed under immediate arrest.

Frank Marshall Davis’s targets were Democrats more than Republicans, given that it was Democrats like Harry Truman who held the White House and opposed Stalin’s Soviet expansion at the time. In December 1956, the Democrat-run Senate Judiciary Committee called Davis to Washington to testify on his activities. Davis pleaded the Fifth Amendment. No matter, the next year, the Democratic Senate published a report titled, “Scope of Soviet Activity in the United States,” where it listed Davis as “an identified member of the Communist Party.”

Frank Marshall Davis would eventually meet a young Barack Obama in 1970, introduced by Obama’s grandfather, Stanley Dunham, for the purpose of mentoring. The boy’s grandfather felt that the fatherless boy was in need of a black-male role model. For that, Dunham chose one of the most politically radical figures in all of Hawaii. He introduced the two in the fall of 1970. An eyewitness, a woman named Dawna Weatherly-Williams, who knew Davis so well that she called him “Daddy,” was present the first time Obama and Davis met. She described the relationship as very influential, with Davis impacting Obama on “social justice,” on “life,” on “what’s important,” on no less than “how to use” his “heart” and “mind.”

So deep was Davis’s influence that Obama, in his huge bestselling memoir, Dreams from My Father, would cite him repeatedly over thousands of words and in each and every section (all three parts) of his memoirs—though he referred to him only as “Frank.” “Frank” is mentioned 22 times by name, and far more times via pronouns and other forms of reference.

It is extremely telling that in the 2005 audio version of Dreams, released to help package Obama for the White House, “Frank” was completely purged from the memoir. As noted on the back cover, the audio version was personally “approved” by Obama himself.

How often did Obama and Frank Marshall Davis meet?

Only Obama himself knows and could answer that question. The Washington Post’s excellent writer David Maraniss, in his acclaimed biography of Obama, writes that “Obama later estimated that he saw Davis ‘ten to fifteen times’” during their years together in Hawaii. Maraniss didn’t provide his source, but he must have gotten it directly from Obama in an exclusive interview for his book. I haven’t seen that figure cited anywhere else.

For the record, 10 to 15 times is notable, especially given the nature and duration of these one-on-one meetings—often long late-night evenings together. (Some people cite mentors who they’ve barely met or not even met at all.) The two would drink and even got drunk together. In reality, I bet the number of Obama-Davis meetings is much greater, given that Obama would be expected to understate Davis’s influence. Consider the print and audio versions of “Dreams from My Father.”

Again, one person could easily clarify the whole thing in a sentence, if he were asked by our “journalists”: Barack Obama.

Now, the billion-dollar question: What’s the relevancy of all of this? Does this Davis stuff mean that Barack Obama is today a closet communist? No, of course it doesn’t. We all know that. It does, however, explain how and why and where Obama went so far to the left, and why he’s so far to the left to this day. In my book on Davis, I quote at length a student communist leader at Occidental College who knew Obama immediately after he left Davis and knew him as a communist. I’m confident from my research that the young Obama was once a communist, and that Davis was surely an influence in that regard. The unknown is precisely how much Davis influenced Obama, and—the true big question—when and where and how and why Obama ever rejected that communist past. To this day, Obama has never, despite two pre-presidential memoirs and thousands of interviews, told us about this radical background and why he supposedly left it. And the media refuses to ask, instead dumping on those like Rudy (and myself) who bother to ask.

As I’ve said repeatedly in my interviews on the Frank Marshall Davis book, Barack Obama could have crushed all wild speculation way back in 2008 by simply being candid about the communism in his background and explaining when he (allegedly) left it all behind. My primary biographical subject, Ronald Reagan, once had been a self-described “hemophiliac” liberal duped by communists. He told us all about it. George W. Bush told us about his alcohol struggles. Hillary Clinton has told us about her shift away from being a Goldwater girl.

So, where is Obama’s conversion narrative? Again, the media refuses to ask.

All of which brings me back to Rudy Giuliani and Barack Obama. There’s a super-quick way to clear up what Rudy is raising: Instead of interrogating Rudy, just once, finally, for the first time, ask Barack Obama about the communist, Frank Marshall Davis, who he spent time with throughout the 1970s. We’re still waiting for just one question.

[Editor’s note: This article first appeared at The American Spectator.]