Trending Now
You are at:Home»Featured»Hindu Radicals Would Evict All Foreign Christian Leaders From Nepal
By ACN-USA News on October 7, 2015 Featured, International Issues, Those in Need 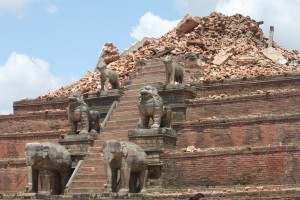 Requesting anonymity, Catholic sources in Nepal have told the international Catholic charity, Aid to the Church in Need, about growing fears within the country’s small Christian population for their future safety in Nepal.

In the early hours of Sept. 14, 2015, three Protestant churches were bombed in eastern Nepal where the Christian population is most numerous; there were no deaths though a few people were wounded. One of the bombs placed at a local church failed to detonate, but it exploded later at the police station injuring four police officers who were trying to diffuse it. The incidents occurred just a few hours before a vote reaffirming Nepal to be a secular country—rejecting a Constitutional amendment proposed Nepal’s Rastriya Prajatantra Party, which seeks to reestablish the country as a Hindu nation.

No group has claimed responsibility for the incident, but suspicion for the church attacks fell on extremist Hindus as pamphlets associated with the radical Hindu Morcha Nepal group were found at the scene. The pamphlets accuse the Nepalese government of being under the control of foreign agents and countries, while blaming Christianity for leading the country into religious and ethnic conflict.

Nepal’s political landscape is tense. The promulgation of the Nepal’s new Constitution on Sept. 20, 2015—the first to be written by elected government officials—affirms Nepal as a federal democratic republic adhering to secular values. The majority of Nepalese celebrated by lighting candles and participating in processions.

Some political parties, however, representing ethnic minorities from Nepal’s southern and western plains bordering India, are unhappy about provincial boundaries, with grievances sparking violent protests that have continued for more than two weeks. To-date, more than 40 people have lost their lives in the unrest.

A source close to Nepal’s tiny Catholic Church said: “We are praying and hoping that no more churches will be vandalized or bombed, as the new Constitution is in favor of secularism. Meanwhile we are committed to continue our relief efforts to help the neediest people of Nepal,” many of whom are still coping with the aftermath of Nepal’s massive earthquake that killed 9,000 people on April 25, 2015.