Trending Now
You are at:Home»Featured»How is Weight Watchers Like NFP?
By Kay Anne Kelly on April 13, 2011 Featured, Health & Fitness 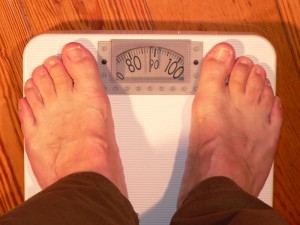 In the late summer of 2000 I entered the doorway of the nearest Weight Watchers and tipped the scale at a little over 200 pounds.  After having two little boys within two years of each other, health issues from the first birth experience, and the death of my mother just days after my second son was born I took solace in one thing:  chocolate.

Though sports for females was limited during my school years I was nonetheless athletic  — I spent years playing baseball with my older brothers and could fill in decently for football if they needed an extra man.  I played intramural sports all through college.  At 5 foot 5 I was average in height and what polite folks called “sturdy” in build.  I actually do have big bones!  But I had never been overweight and out of shape.   One would think my biggest concern would be how my husband viewed me, but it wasn’t.  It was the thought of a family reunion almost two years away that lit a fire under my growing backside.  I had not seen my six big brothers in years.  What would they think of me?

Any woman with brothers can likely understand.  Brothers are there to be brutally honest.  Examples from my young teenagehood:

And that Lu-Lu of a comment from the past:  “Women who whine about stuff that they can actually do something about make me nuts.  Don’t ever grow up and be like that, okay?”

After seeing the impact WW had on my sister-in-law while visiting her family, I spoke with Pat on the long drive back home.  He knew this was weighing on me (pardon the pun) and I was not happy.  I had never been gorgeous and well put together (I am still wanted by the fashion police in 5 states – thus the reason this is written under a pen name) but I wanted to be healthy.   Pat and I figured out how we could squeeze $10 a week out of our painfully tight budget so I could try and lose some weight — I admitted I needed the help.

Seeing my husband forgo coffee so I could lose weight had an impact.  I was determined this would work to justify his personal sacrifice.  As I met with my counselor that first time I was stressed, how could I do all they expected me to do and lose weight?  As she went over the basic design of the program a smile crept over my face.  This incredible plan for losing weight:  chart what you eat and keep track of which category that food belongs to

My reaction must have startled her, she reassured me this would take a short while to get used to and become second nature in no time at all (where had I heard that before?  Oh, yes…our first NFP class!).   Key points:  portion size (NFP translation – all things in moderation); save up points for special occasions or for a little splurge (NFP translation – time and a purpose for all things under Heaven….abstinence makes the heart grow fonder); celebrate success (make the most of that non-fertile time!);  have a long term goal (more babies!  Only I’d be healthier!).

My chuckling stopped when she noted the exercise expectation for serious weight loss.  I literally broke my butt bringing my first born into the world, the back issues that followed meant I could only walk for exercise without causing debilitating back pain.  How in the world could I lose weight just walking?    She assured me I could.  I doubted.  How could this really work?  How could something so simple be so utterly profound and effective? (hmmm, where had I heard that before? Ah, yes…NFP!)

All the food in the house was marked with point values and Pat began to do the program, loosely, through me.   Pat did all he could to allot a few more dollars for groceries for specialty foods that were healthier for both of us.  He came home on time or early on nights I did not work so I could go to the park and walk  — it was not long before I was walking 3 miles a day, at least 4 days a week.   Pat started parking a mile away from his building downtown and walking to work from there, then taking the stairs up 10 flights for more exercise.

Nine months later I had lost 56 pounds….and Pat had lost 25!  NFP-style weight loss worked for both of us — it was a team effort, not a ME effort.  It was not about becoming a “hottie for my hubby” which was quite impossible since I never was one to start with.  And while the initial motivation was to impress my big brothers that changed over the course of the next year… as avoiding prayerfully became openness… and I arrived at my family reunion weighing in at a whopping 196 pounds.  I was 8-and-a-half months pregnant!

Almost 11 years later I am back at Weight Watchers (they now have a few variations of the Points program…again, just like NFP! Points or Points Plus?  Creighton or Marquette?).  Pat and I now have 4 kids and it took until #4 was 4 for me to hit that point again.  I was not 56 pounds overweight, but 25 this time.  My patient husband waited again as I learned to balance homeschooling, pro-life work, motherhood and wifedom… only this time he took the lead.  He is now doing half marathons working towards a full marathon and I am preparing for the Peachtree Roadrace (10K) in Atlanta on the 4th of July (I am up to 5.5 miles a day/4 days a week now).  We will do that race together…. he will finish before me since I can only walk it, but he will wait for me… run back for me and finish with me.   Because it is not a ME thing, it is a WE thing.  Just like NFP.