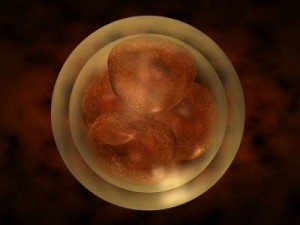 Zygote comes from the Greek word meaning yoked, joined together.

After looking at the comments left on my last post, Was Jesus Really Silent on Same-Sex “Marriage”?, I recognized the need to be more explicit on a point. Even though the gospels record only a few statements from Jesus regarding marriage, it is enough to undercut any claim by Christians that marriage should be redefined to include same-gender couples. Jesus’ words in Matthew 19:3-12 give a biological order that must be observed in the Christian definition of marriage: Unless “a man” and “his wife … become one flesh,” there is no valid marriage.

What I did not come out and say explicitly, although I have no doubt the majority of you understood, was how the marital relationship described by Jesus ( life-long, sexually consummated, male-female) yields good fruit – the conception, birth, and nurturing of the next generation. It is implicit in Jesus’ teaching about marriage. He told his listeners that if they wished to understand God’s vision for marriage, they had to look to how it functioned in “the beginning” and quoted Gen.1:27 and 2:24.

Sandwiched between those two verses is Gen.1:28 where after blessing them, God says to them, “Be fruitful and multiply, and fill the earth and subdue it.” New life is the natural end of a husband and wife’s union in the flesh. (Speaking from a purely biological point of view, it’s the only end.) By digging into Jesus’ words and following his lead to Genesis we find nothing but support for the traditional Christian definition of marriage: The life-long union of man and woman for the purpose of mutual support and the welcoming of new life into the world.

I say this is the traditional understanding of marriage among Christians. From it you can see why quotation marks often surround the word marriage when orthodox Christians write about same-sex “marriage.” Two elements necessary for a valid marriage are missing: male and female genital union and the resultant possibility of new life. One of the reasons (and please note, I do not claim that it is the sole reason) there can be a push for same-sex “marriage,” even among Christians, is that many of us have allowed a wedge to be driven between the unitive and procreative dimensions of the marital act – and that wedge is contraception.

Since 1930, when the Lambeth Conference passed a resolution giving sanction for the Anglican faithful to have recourse to contraception in some limited cases, the practice of contraception has swept through Christianity like a wild fire. One by one, denominations jettisoned the ancient Christian conviction that intentionally sterilizing the marital act, the sexual act, was a sin. The Catholic Church is the only witness left standing, and only a handful of her children practice what she preaches.

Like the rest of Western culture, the majority of baptized Christians no longer understand marriage as do Christ and His Church, and contraception has had a decisive role. Marriage and the marital act became solely about uniting the spouses, and the conception of children became optional instead of inherent in the sexual act. For the first time in history it was possible for Christian to lose sight of the what made the union of man and woman in Christian marriage so utterly incredible – making present the mystery of Christ and the Church, they shared in the conception and nurturing of children for the Kingdom.

When that understanding, that biological truth about the marital relationship, was lost, Christians became susceptible to the cultural push for same-sex “marriage.” If marriage is about the union of two people, then of course the deep emotional and sexual relationship between two men or two women, can be a marriage. They no longer understand that to be a valid Christian marriage, the necessary biology has to be present – only a man and woman become “one flesh” in a manner that produces new life. Acts between individuals of the same gender can be pleasurable, may create emotional bonds between the individuals, but the union between them can never reach the level of reality where it “takes on a life of its own.”

It’s such a basic biological fact; sadly, many of us have contracepted ourselves blind.