Trending Now
You are at:Home»The Catholic Family»Education»How to Be Right All The Time
By Nicole DeMille on November 16, 2013 Education, Featured 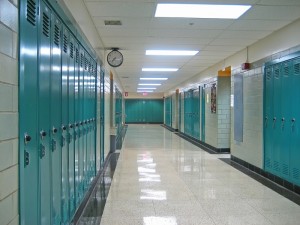 Back in my other life, when I was a full time high school English teacher, I had a lot of good stories.  Almost daily something funny or tragic would happen because I was working with two highly dramatic and unpredictable groups: teenagers and teachers.  Throw in parents paying high property taxes and administrators protecting their car allowances, and you had a rip roaring time.

I started my career in a district with no contract.  Almost immediately I was walking the picket line and wearing black on Fridays.  My enthusiasm for my new career wrestled in my heart with my desire to stick it to the man and win a decent pay rate for the veteran teachers who had been in this fight for as long as I had been alive.

When Union drama wasn’t the order of the day, parent drama was.  Invariably around report card time, there was a mother or father up in my face yelling at me about how I kept Precious out of MIT by failing her.  The happiest moments of teaching, honestly, were with my kids.  Just me and my kids — talking about literature, laughing, sometimes even crying.

It was very difficult not to verbally slay the students when they would talk back.  I have a facility for language and a pretty wide vocabulary, and I learned to restrain that quite a bit. Those kids really  believed they had the art of debate down pat.  In truth, they were very privileged, unworldly, not very well-read, and had poorly formed consciences.  Their idea of argument was generally emotion-based.  Only when I taught 13 AP did I encounter any semblance of real argument, and that was a pleasure.  Still, I learned so much from my kids when they felt passionate enough to raise their hands and express a grievance.

I remember a day one of my boys raised his hand wearily, and asked, “Why do you and our parents tell us not to do drugs, but then we come to school and we study these poems written by guys who were on opium?”  It was hard not to laugh, or slap the kid on the back, but at least he was thinking.  I told him, “Kev, if I were only allowed to teach you the writings of perfect people, it would be a very short day and a very quiet building.” The class laughed, and a pretty decent discussion ensued.  One thing I tried to express to my students was that I was no better than they were, and probably no smarter.  But with thirty of us in the room, one person had to be the leader or there would be chaos. Since I was the only one with the degree in English, well, it followed that that person should not be one of them. They always  accepted that.

I got many winces and twisted faces when I would tell people at cocktail parties or at church what I did for a living.  They didn’t understand why a young woman would want to teach teenagers.  Wouldn’t it be easier for me to deal with little ones?  No, I reasoned, because the bigger kids had better bladder control.

The truth is I really like teenagers. It’s such a hard time of life, and a lot of people, most people, simply don’t like teenagers.  But when you get to know them, they have a lot in there.  They’re just caught between being cute and being like you, a grown up.  They don’t have a steady gig, an act, a real personality just yet.  So they try on different faces and voices.  Sometimes the girls would want to be like me.  I discouraged that.  I’d tell them, “Look in the mirror and see who is behind your eyes.  See who’s really in there.  She’s you, not me. It’s my job to help her find her voice, not parrot mine.”

I told them light things, airy, silly things, that they would often write on the end of the year evaluation as the most memorable.  For example, I’d tell them that if they felt sad, or violent, or like hurting themselves, to go look in the mirror (again) and make silly faces.  Like really funny silly faces, like when they were kids.  Then come back and tell me the next day that you  didn’t laugh.  It worked every time.  They would come to me, even the crudest and toughest ones, “Motsch, it worked . . . I laughed my ass off,” or, “I didn’t drink last night . . . I wanted to, but I did that faces thing, and I was laughing and I called my friend, and then it was time for bed.”

A lot of people who find out what my career was think that teenagers would be a population bent on rebelling and arguing all day long.  I didn’t find that to be the case. I find adults way more tedious. Adults have a strange and powerful addiction to the sureness about how right they are. They don’t care if they lose everything as long as they can have the precious and coveted last word.

Me, I don’t care much about the last word.  Go ahead, have the last word.  I’d rather have the true word. The kind word.  I’d rather say something that edified someone than say something that cut someone deeply enough that he or she simply slinks away from the conversation.  That’s not winning the debate — that’s pride.  That’s the devil.  Particularly in theological debate, our goal should never be “the last word” or “winning.”  There are no winners and losers in the Kingdom of Heaven, only sinners who cooperated with grace somehow.

How on earth is a Catholic mom in her forties going to win over a staunch pro-choice atheist in his twenties?  Well, how did that young teacher of almost twenty years ago win over the kid who, on the first day of school, announced: “Just to let you know, if you fail me, I’m gonna have to kill ya?” How did I break his spirit, get the last word, win him over to my ideology, score points on him, get him in a full Nelson?  I didn’t.  I told him on day one, “Well, you probably don’t want to kill me because your jail sentence lasts a lot longer than the year this class will take.”  Day by day, forty-two minute period by forty-two minute period, I showed him who I was.

Before I asked him to reveal himself, and make himself vulnerable, I made myself vulnerable.  I told my kids about my life.  When I got pregnant, I announced to my first period class that I may have to run out of the room with nausea.  They watched my belly grow, and I let them all touch it, showed them the sonogram pictures, let them suggest names.  I remember a tough boy, a boy who could take apart a car and put it back together, but who was hopeless with a Shakespearian sonnet, hugging me goodbye before my maternity leave.  “I don’t want to hug you too tight and hurt the baby,” he said in my ear.  I choked up immediately.  “Don’t worry; I’ll miss you too.” I said.  When we parted, there were tears in his eyes.

The Reverend Dr. Martin Luther King Jr. said, “Those we would change we must first love.” If we cannot hold to this maxim while evangelizing, we are indeed doomed to fail.  We can walk away feeling right, like our liturgical preferences are the best, and we are superior for never having been divorced, and tight jeans are a ticket to Hell, and we will, in our own minds, have won.  But we will have lost the soul of the person we are trying to evangelize.  Because we will have shown no vulnerability.

If I were all intellect and no heart during my teaching career, it would have been an epic failure, instead of the amazing eight year span of smile-inducing memories it is.  Did they learn Shakespeare?  I don’t know.  Some did, and some didn’t.  You tell me.  They heard it.  They were listening to me; I know that.  They knew that I knew my material and that I wanted them to enjoy it and be better for it if they possibly could.  I wanted to GIVE them something, not take something away from them and put it up on my shelf like a trophy.

Teaching teenagers is analogous to the “New Evangelization” in many ways.  There are endless challenges, nobody really seems to want to do it, and no one has figured out the perfect formula for HOW to establish a high success rate.  And both are a work of heart and soul long before a work of mind and intellect.  In both pursuits, knowledge of content area needs to be impeccable, but we do not wear that expertise like a gaudy set of pearls or a luxury vehicle.  We slowly reveal it, as the recipient is ready for it, bit by bit, and if we are sincere, it will show.

Oh, and the last thing: teenagers, as I have been quoted as saying many times, have very finely honed BS detectors.  I think the same is true for non-believers, agnostics, fallen aways, lukewarms, militant atheists, or anyone we are trying to evangelize.  If you are in it for “the win,” or for “the last word,” they will see right through you.  And recoil.  Do I want to be right all the time?  Yeah, I do . . . right with God.  Right in my actions, right in my words, and able to look RIGHT in the mirror.